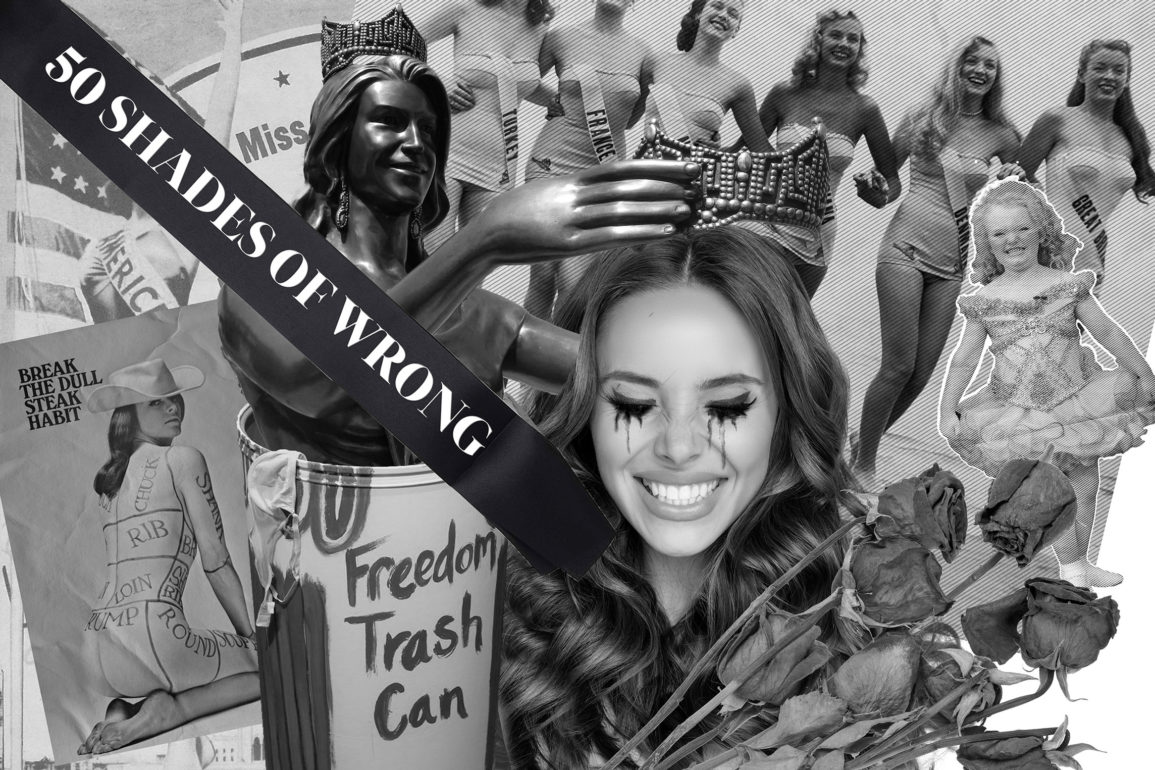 You saw the title and were reminded of the very famous book and movie, ‘Fifty Shades of Grey’. This is not about the unrealistic story of Christian Grey and Anastasia Steele. But I guess there are some similarities – the subordination of women, the lust, the sexual exploitation, and very peculiar contract demands.

This month, the world will stop to rate women based on shallow features to decide who deserves to be Miss Universe. The year 1952 marks the beginning of – what I consider to be – a very unhealthy contest. Miss Universe started as a marketing stunt by a California clothing company, the Pacific Knitting Mills, after the winner of the rival pageant (Miss America) refused to wear one of their swimsuits. Yes, Miss Universe was started as a petty fight. Although, that’s not even the worst part, their rules are. If you wish to be part of the competition you should be between 18 and 27 years old and have a university degree. The contestants can’t have children and can’t be married or engaged. This used to be even stricter, their participation would not be valid if they had been married once or even if they were widows. According to the pageant’s website the winners must have intelligence and poise – obviously, someone who was once married was not very intelligent otherwise would have stayed single *eye roll*.

Beauty pageants have been around for a long time, the first Miss America took place in 1921. They have become part of the American culture. Since then, beauty pageants have made the news frequently and usually not for the best reasons. Many beauty queens have made the headlines, some saw their crown and title removed because they lied about their age or marital status; others were involved in sexual and drug scandals; some saw their online profiles deeply analyzed and racial slurs were exposed; others were accused of cheating during the competition and there have been episodes where the loser doesn’t take on the news well and steals the crown from the winner. The scandals don’t include merely the contestants, the CEOs of the pageants are also in scrutiny. Many are accused of using the pageant for their own business goals; others accused of sexual harassment and exploitation. In case you haven’t seen any of these, I’m sure you remember the video that took over on social media in 2015, when Steve Harvey announced the wrong Miss Universe. All this adding up has ruined the pageant’s image.

I have no experience in beauty pageants or any desire to ever be part of that alternative world. But I do remember being in my teen years, getting home from school, turning on the TV and coming across a show called ‘Toddlers & Tiaras’. That is probably one of the worst shows I’ve ever seen in my life. The show would display the backstage and preparation for the beauty pageant. Children little over one year old were – what many times seem to be – forced to participate as if their mothers were having some kind of feeling of fulfillment from it. Hours and hours of practice, walking straight, learning to pose, fake smiling your way through the catwalk. On the day of the pageant a huge commotion, moms stressed trying to force toddlers to stay still – which at this age is pretty much against their nature – doing their hair or resorting to wigs, using fake spray tan, some even adding fake teeth to hide the natural process of decaying baby teeth. Of course, at that time, the first thing I thought was how these moms put all those things on their kids, when I would see my sister fight my mom for hours to put a shirt on, so she could be sent to kindergarten. But today, I see the effort put to transform those children into miniature grown women.

Although a win can boost their confidence, every time they lose, they wonder why they were not pretty enough. To this day, I don’t understand what is appealing in beauty contests for children – or in any age. It does them more harm than good. Even if they win, the prize doesn’t make up for all the money spent. It’s not a sport. It seems to be a group of moms showcasing their ‘most beautiful creature’, forcing their dreams on their kids. In fact, studies found a high rate of eating and mental disorders in adults who had participated in beauty pageants as a child. Beauty pageants don’t only break your spirit, they can also break your bank account. Each contestant needs to present a couple of outfits, which are not worn very many times but are extremely expensive. Each outfit costs around $2,000 and there are many other costs when participating – makeup, hair, accessories, coaches, and instructors. And things don’t get prettier as they get older.

Now, let’s talk business. What are women competing for in Miss Universe? The winner takes home a cash allowance, a New York Film Academy scholarship, a modeling portfolio, and access to events such as fashion shows and opening galas. Additionally, they get beauty products, clothes, shoes, as well as styling, healthcare and fitness services offered by the sponsors. The person who wins the crown will dedicate their next 365 days to interviews, hosting events, traveling, supporting humanitarian causes and, most importantly, representing the brand of Miss Universe.

For a country to be part of the contest, a local company or person needs to buy the local rights through a franchise fee which will include the rights of image, the brand and everything related to the pageant. That country’s model selection will involve a local pageant or an internal selection. Contestants only have one chance to win the crown. Before the contest, they spend weeks in preliminary competitions, numerous rehearsals and all their efforts will be judged on a two hour live show. Many participants undergo procedures to enhance certain features looking for any advantage they can. Lip fillers, botox or even more invasive procedures—all is allowed.

When you visit their website, they claim to be an inclusive organization that celebrates women of all cultures and backgrounds – I mean, but only the single one’s, right? They consider themselves an inclusive organization, but they only allowed transgender contestants after 2012 – and only after a lawsuit. The first transgender contestant walked the runway on 2018.  That’s one of the many examples of their hypocrisy.

One of their major goals is, and this one I’ll have to quote, “Breaking stereotypes – Research has shown the #1 obstacle for women to overcome in reaching their potential is a lack of self-confidence.” Lack of self-confidence? I wonder where that comes from… probably from the same beauty industry that sponsors these contests and feeds from our insecurities. Advertisers and the media have played a big role in telling people what is beautiful or not. And where is the diversity when all participants are a size 0? Aren’t they spreading the wrong message? Especially in a world where young women feel forced to look and act a certain way.

Despite asserting that their focus is the intellectual and philanthropic side, the pageants’ structure demonstrates something else. First, you are judged based on your evening gown; second, you will walk the catwalk wearing a swimsuit or athletic clothes (probably the most honest part of the competition); you will then, finally, have a ‘personality interview’ where they will question you on subjects such as politics, social or cultural issues – attention, you are not supposed to be very opinioned on a particular subject; and lastly, we go back to what this is really about, the final look. So, it’s 75% based on appearance. In today’s society, it is already wrong to have a contest based on looks, but it’s even more disrespectful to mask it as it’s a philanthropic crusade.

But wait… things do get worse. Donald Trump, along with NBC Universal, owned Miss Universe from 1996 until 2015, when he was forced to sell after his speeches generated controversy during his presidential campaign. From invading the contestant’s privacy to joking about his obligation to sleep with every participant, Trump’s behavior sums up the dark side of beauty pageants. As the owner, he would make his personal selection to guarantee the ones he found the most attractive were in the final. He publicly and proudly stated, “the bathing suits got smaller, and the heels got higher, and the ratings went up.” During Trump’s campaign, Hillary Clinton reminded the public that according to Miss Venezuela, Alicia Machado, he had humiliated her by forcing her to exercise in front of a group of reporters after she had gained weight during her reign. In fact, many of the contests have lost their crown for gaining weight – and by gaining weight, I mean to put on two kilos like we will all be doing during the holidays.

For me, this is enough proof that these beauty contests do not empower women. It’s not just glitter and glam. Beauty pageants perpetuate the idea that women are just bodies to be rated from 1 to 10, which keeps alive the impression that the best we have to offer is our appearance. Having them pretending it’s something more than that is even more disturbing. On the other side, and to be fair, I think it’s great that women take the opportunity to accomplish a career they desire, but that doesn’t erase the awful situations they have to face. I’m sure there’s plenty of inspiring women who enter these competitions, but a beauty pageant is definitely not the best way to portray them.

My opinions and views aren’t unique—beauty pageants have been causing disconnect between women for a long time. In 1968, 400 women took the streets of New Jersey to protest Miss America. That day, they crowned a live sheep “Miss America”, and threw bras, makeup, aprons, and cleaning products into a “Freedom Trash Can”. I can’t believe that 53 years later the beauty pageants are still on and have over 500 million viewers in over 190 countries. The Freedom Trash Can gets fuller and fuller, but progress is sluggish. I guess humanity really is doomed.