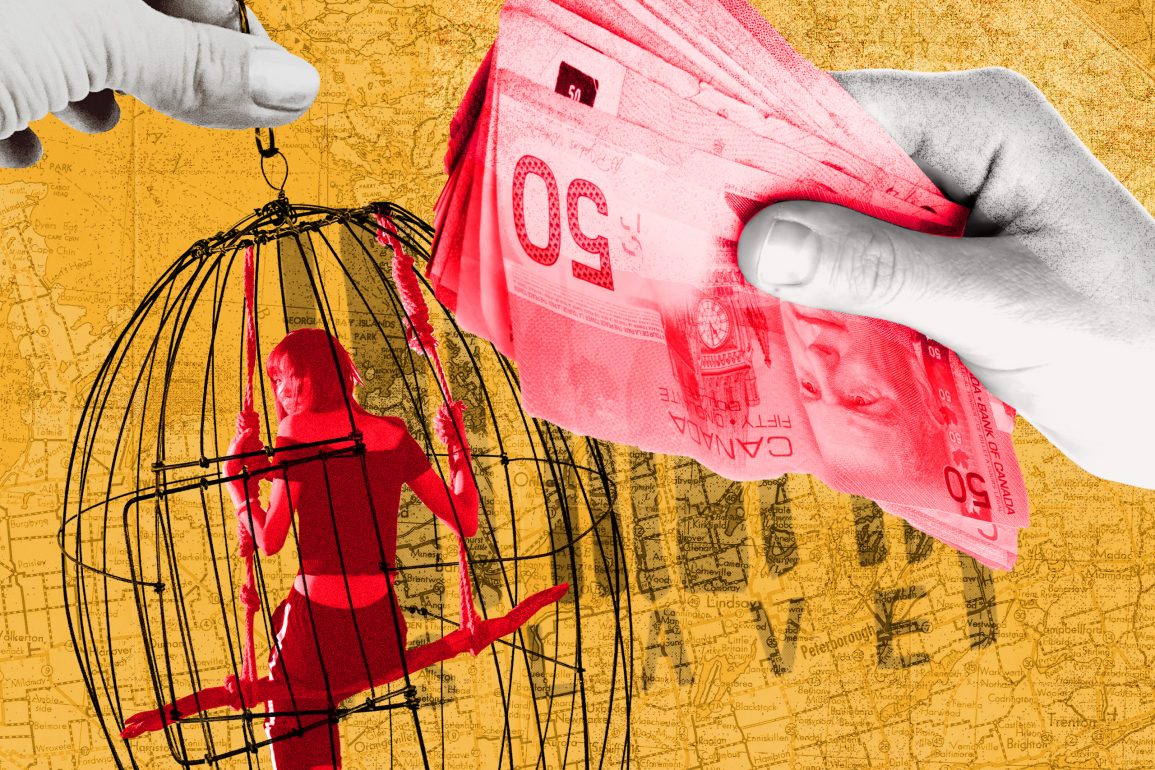 Forced, tricked and misled into modern-day slavery. It’s a silent trap that is developed over months—building up trust and ruining other relationships in the process.

Human trafficking. The United Nations definition states it is “the recruitment, transportation, transfer, harbouring or receipt of persons for the purpose of exploitation.” Facts tell us that it’s an illegal activity that generates approximately US$ 150 billion annually. More astonishingly is the fact that there are more people enslaved today than in any other time in history—even when slavery was legal. It’s estimated that over 30 million slaves exist globally, of which 10 million are children. Each case represents a life torn apart, a life grounded on fear, a life without free will.

It’s a problem society tends to ignore because we assume it’s happening far away, in other countries, but we need to realize that it resides in every community’s backyard. The unfortunate reality is that almost half of the victims are trafficked domestically, within national borders. Everyone can be a potential target—men, women and children. It is estimated that 51% of trafficking victims are women, 28% are children and 21% are men. Internationally, a child is abducted every 30 seconds, for sex, slave labour or organ harvesting.

How was your life when you were 17? Were you falling in love? Vacationing with friends? Choosing university courses? It’s a great age. It’s also the average age for victims of sex trafficking with over half of the victims being recruited into the sex trade by someone they know. It’s a “business” that prospers mainly because its victims are dismissed as society’s outcasts—the addicts, the homeless, the prostitutes—being often shrugged off as a victimless crime.

Naturally, the internet has become a key tool for finding new victims and to lure “possible buyers”. Criminals troll and target the weak and vulnerable, presenting themselves as a friend that can solve all their problems. They search for people with low self-esteem; who have had possible previous traumas; that have an unstable family life; or those who live in poverty and have a lack of economic options.

This brings us to the pandemic which could be putting more children in vulnerable situations—they can’t go out but are at home connecting with people on social media. In addition to regularly monitoring their children, there are a number of red flags to watch out for that can help people identify a potential trafficking victim: bruises, injuries or other signs of abuse; tattoos or burns (branding) displaying a man’s name; older or controlling “boyfriend” or “girlfriend”; social isolation from friends and family; sudden change in material possessions (e.g., expensive clothes or accessories); More than one mobile phone (one for parents and another for the trafficker and johns); highly sexual clothing or online profile.

Innumerous times, people that have been trafficked are not aware of what’s happening to them. Many believe they are in a relationship with the abuser or are oblivious to the fact that they are being exploited. Once they realize their situation, fear, shame and guilt take over, which prevents them from asking for help—a silent trap.

In recent months, the Netflix documentary Jeffrey Epstein: Filthy Rich has made many people aware of sex trafficking. There are many other docs available on YouTube which you can watch for free—we’ve selected four that help illustrate the problem with personal stories.

If you are a victim or survivor of forced prostitution or forced labour, or believe someone else might be, call the multilingual hotline at 1-833-900-1010
canadiancentretoendhumantrafficking.ca

Three real stories of how girls were bought and sold in the US via backpage.com—a site that controlled approximately 80% of the online sex ad market.

MA: 13 years old. After being missing for 270 days, her mother found a website with her pictures and asked to purchase the services herself.

PARENT: “We got her back but she was addicted to drugs. she had been very abused and she ran away two more times.  My daughter was stabbed, burned, had her head shaved, she was beaten.”

Two volunteer filmmakers journey to the front lines of slavery around the world – Nepal, India, Ghana and Congo. Free The Slaves is an organization that rescues and helps people to reintegrate society, build more skills and live a better life.

KAMALA (NEPAL) “I was tricked. I was trafficked by my own aunt. So you don’t really know who you can trust. They’d make me work from 5 am to later than 1 am the next day, and didn’t pay me.”

SANJAFI (INDIA) “They took me to work at a brick kiln. I saw people’s thatched huts were being torched and they threw my things in the fire. We were freed but we suffered a lot. One laborer in our group died from being beaten so badly.”

Nameless is a documentary that addresses child sex trafficking in Washington, DC, and at-large.

TINA FRUNDT, EXECUTIVE DIRECTOR COURTNEY’S HOUSE “When you are with a pimp, they pick your name for you.Each one, renames you. Very similar to slavery (…) People are judging you, so you can’t go to them. They think it’s a choice, so now I have to pretend that this is what I want to do, to fit in, so you won’t think bad about me. You lose hope.”

NATASHA GUYNES, FOUNDER HER RESILIENCY CENTER “They didn’t care about my well-being, that I was hurting inside, they didn’t care that at the end of the day I would drink whisky and smoked crack as a way to leave my body because of the trauma I was putting myself through.”

A doc focusing on the situation in Hampton, VA, which is affecting children, college students and adults who often find themselves under someone’s control before they even realize it.

TANYA STREET “I was lured into sex trafficking when I was 18, I meet this guy through a friend, he buys the things I wanted, he was handsome, had this beautiful smile… He was 28. I was already independent, I had a baby, I had my own place and was preparing for college. I felt that the age gap was not a red flag (…) we continued to talk and started dating. That’s how it started. I was abused by a family member from when I was 7 to 14 years old. So, I hadn’t had people in my life to support me, or just to talk to. This guy, he listed to me (…) I said yes to my relationship with him, to what he asked me to do, to partner with him to keep my relationship with him. The entire time I was being trafficked, that was my mindset.”