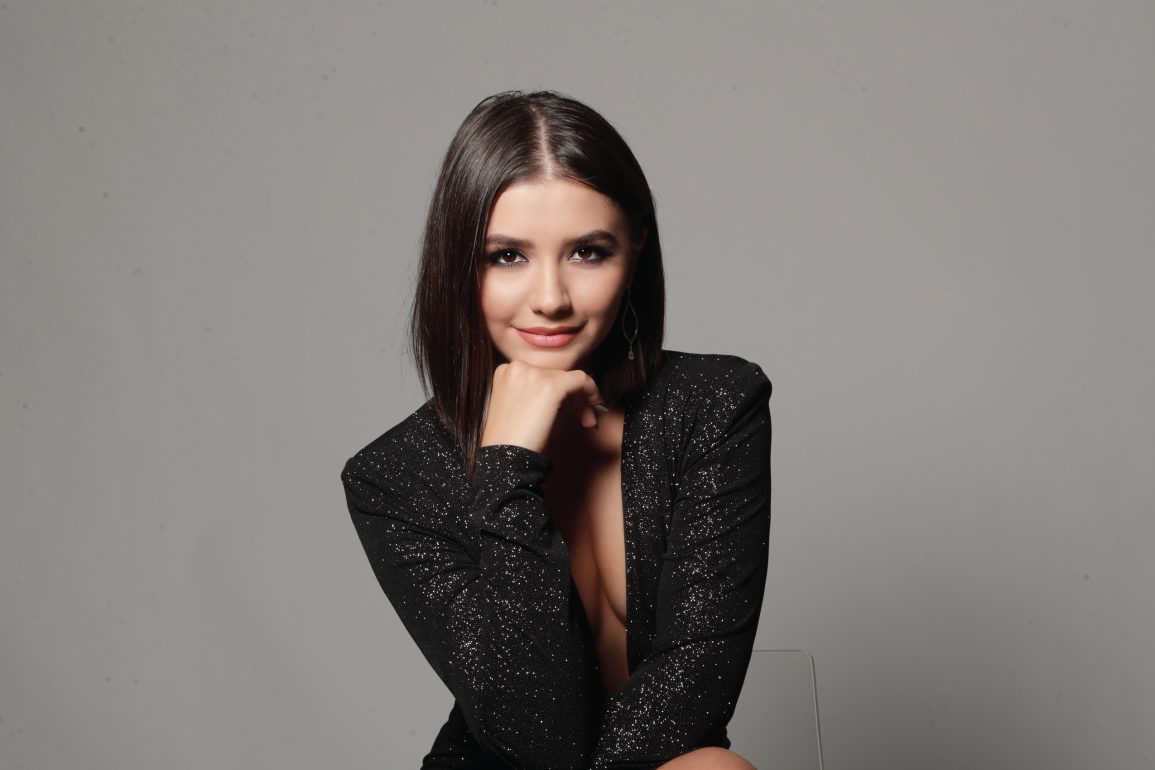 A talented actor, dancer and singer, Ana Golja made a name for herself playing Zoë Rivas on the hit series Degrassi: The Next Generation, now at 24 she has added producer to her resumé. Her new film, The Cuban which also stars Louis Gossett Jr and Shohreh Aghdashloo is currently playing drive-ins across North America.

Ana was a guest on Camões TV’s Here’s the Thing, where she spoke with Manuel DaCosta about her career and film.

Luso Life: You are Canadian with a diverse background, what are you roots?

LL: When did you start to perform?

AG: I started dancing at five years old. The arts were always encouraged, supported and celebrated in my family. We watched a lot of old movies—Shirley Temple movies, I felt inspired by her. So, when I was 5 years old, I went to the bathtub, opened up the water and started tapping my feet to imitate the sounds that she did. Once my parents saw that, they took me to a dance class, then I competed for 14 years. I still dance and do musicals. It’s something that’s in your blood and in your heart.

LL: At the age of nine you transitioned to TV.

AG: The first audition I had was for a guest star role on a TV series called 1-800-Missing. It started out with a few recurring roles, then I did a lot of work for the Family Channel, Disney and Nickelodeon. I did White Christmas on Broadway, then The Sound of Music at the Princess of Wales Theatre and I haven’t stopped.

LL: You’re only 24 and have already achieved so much—you are a musician, a dancer, an actor, and it’s amazing how you tie these things together.

AG: To me these are all the same thing, they are all a form of expression, a way to tell a story and that’s my favourite thing to do.

LL: In your musical career, you released your debut album, Epilogue in 2018 and are currently working on the follow-up. Is the new album very different or are you following the same roots?

AG: Definitely the same roots in terms that they are all personal—I co-write and that is the core of the process. Sonically the production, it is very different from the first release. Its more current and teetering on the side of dance music which is very exciting because of my history in dance. More than ever, I want to put on a show and entertain people.

LL: How has the pandemic affected your creativity? What were you able to do to keep things going?

AG: At first it was the initial shock…the world is ending, everything is shut down. It was very difficult because I was on a trajectory with The Cuban. We had our theatrical release ready for April 24 and all of a sudden that was gone. Everything was on hold or cancelled. Through that, then you realize how grateful you are if you are healthy, you are surrounded by family and have everything you need. With the time that I had, I was able to watch a lot of content and listen to a lot of music. That combined with all the movements that are happening right now and I started to write more.

This is a time for reflection and growth, and I think everyone will come out stronger.

LL: How important has family been as a support factor?

AG: My family is always the most important and are always very supportive of me and what I do. During the pandemic, they all work from home, so they were able to easily adapt. Frankly they love it because they don’t have to spend an hour in traffic to get to work, but they knew how I was dealing with it and they were there to cheer me up.

LL: You speak lovingly about your great-grandmother.

AG: My great-grandmother, immigrated to Canada when I was maybe eight-years-old. I grew up with her doing my hair every day before going to school and I was very close with her. Fifteen years ago she suffered two strokes and after that it’s been a steady decline—she was diagnosed with Alzheimer’s disease and Dementia. It has been difficult for everyone, especially for my grandmother who is her caregiver and pretty much hasn’t seen the light of day in 15 years… that’s real love.

LL: The core of The Cuban the importance of our ancestors.

AG: My partner had a dream about his grandfather, where he regretted not spending more time with him, listen to his stories and his wisdom. That paired with my great-grandmother dealing with Alzheimer was where it all began for us.

LL: Why the name The Cuban?

AG: We are all huge fans of jazz music and we realized how many incredible Cuban jazz music musicians there are in Toronto. As we were developing the story line and the music element, we decided that we had to showcase these amazing artists and have Canada’s diversity represented in the film.

LL: Is the music original?

AG: Yes, all the music was composed for the film, by the renowned Cuban composer Hilario Duran. We have two or three famous Cuban songs to add familiarity but everything else is original.

LL: Who do you play in the film?

AG: I play the role of Mina. She’s an Afghan immigrant who starts her first job in a nursing home. There, she meets, Luis who is played by Louis Gossett Jr. Luis has dementia and she discovers through music that he used to be a famous musician in Cuba. The film explores his memories of Cuba and the beautiful relationship they develop.

LL: When completed, did the movie fulfill all your expectations?

AG: It surpassed them. I hadn’t worked with my director before, Sergio Navarretta. Obviously, I knew he was incredibly talented and such an artist—everyone felt that, even where we were filming. He would play our soundtrack in between scenes to keep everyone motivated. I still had no idea what to expect visually and at the end, it’s beautiful.

LL: How was the film received in the Canadian Film Fest?

AG: It was interesting because it was virtual, so it’s hard to get a sense of the reception through social media. There was a lot of great comments but it’s different from being in a room with an audience to see what they were feeling.

LL: Are you frustrated that you are not able to exhibit the film the “normal way”?

AG: We filmed in Toronto and Havana. After 4 years of work, of course it is frustrating… we have to create a new way of people seeing the film and consuming the content. Thankfully we have an amazing group of producers, the four of us decided to do a drive-in release, so we had the premiere at the Lavazza Drive-In Festival on July 20. It sold out! It’s playing now in selected cities.

LL: Why did you decide to become an entrepreneur and to start producing films?

AG: Being on Degrassi for six seasons, we went from doing MTV and Nickelodeon with 40 episode seasons, to Netflix where the standard is 10 episodes each season. I went from filming 9 months of the year to 4 months of the year. So, I had a significant amount of free time, I wanted to do something different and expand my horizons within the industry. I wanted to get a better understanding of the scope of production. When you are an actor you walk onto a set and think you are the center of the universe, but as a producer you learn you are only a tiny piece of the puzzle.

We have to look into the financial aspect, the location, the actor’s availability, etc.

LL: Was it difficult to raise funds for a movie like this?

AG: It’s difficult to raise money for any movie.

LL: How did Louis feel about having such a young producer?

AG: He’s a special man. He supports young people in every aspect. He works with a lot of organizations, he started an organization of his own called Eracism. When he saw these two kids running up to him in the Ryerson theatre, he laughed…it was comical to him but he was  impressed by it.

LL: What are you most proud of in this movie?

AG: I’m proud we got it done, honestly. My partner and I initially developed it as a short film, just for fun. Something sweet that would make a positive impact in the world, then it blew out of proportion to something greater than we imagined. I’m most proud of the fact that we were so gutsy. We were too ignorant to know any better. If we knew then what we know today, we probably wouldn’t have done it.

LL: The experience will serve you forever.

AG: Absolutely, now I have the producing bug. I’m already developing another feature.

LL: Do you feel more comfortable on stage, in front of a live audience or in film?

AG: They are very different. I would say that I have a very special place in my heart for theatre and the stage. Just being able to feel an audience and being able to feed off that energy is something I can never replicate. It’s incredibly special.

LL: In the future, what do you want to accomplish?

AG: Building an entertainment empire! Eventually we will get there, it takes time. In Canada, you’re not raised in any boxes—there is nothing holding you back. If you want to accomplish something, you can. You don’t grow up with the thought of not being able to do something. Making this film would have been one hundred times harder if it was in the US. There’s no government funding like we have here.