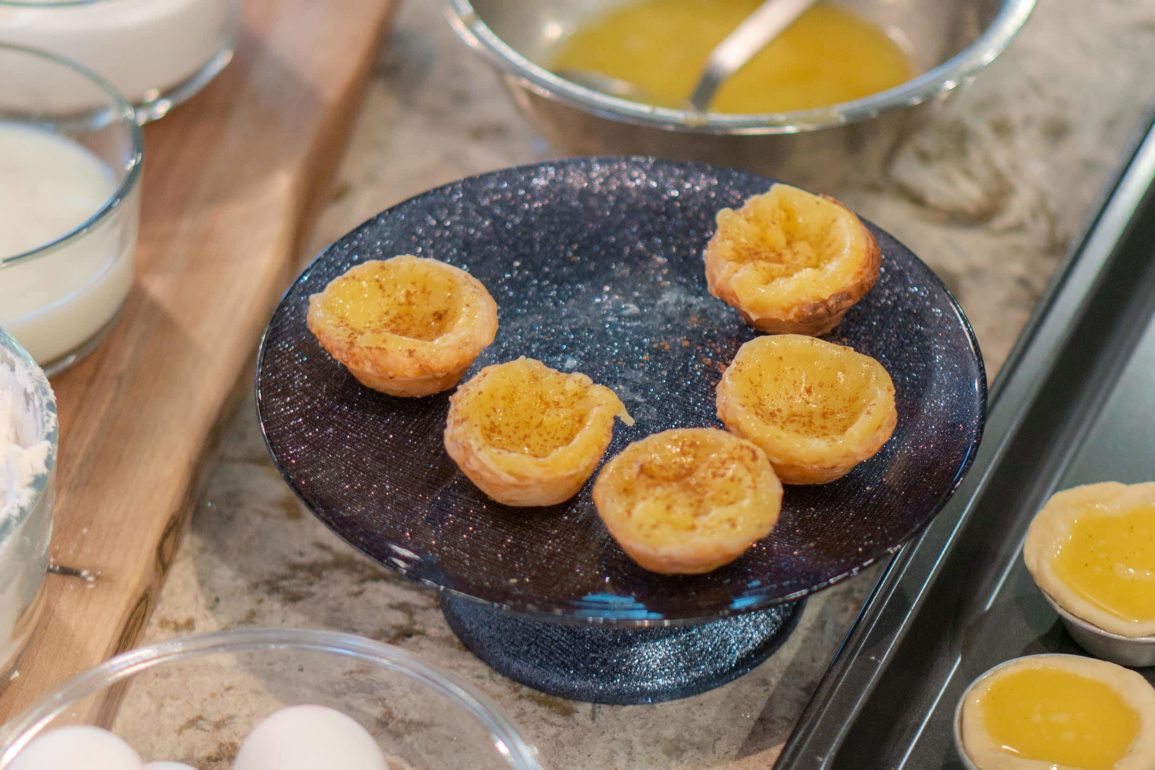 It’s taken 12 issues to get here, but our pages are finally graced with the presence of the mighty pastel de nata—incidentally, a dozen is a nice even amount to make.

The concept behind the “Mesa da Avó” [or avô] article was born from a simple question—a few years ago, during a Christmas dinner, I listened as one of my nieces asked my mother-in-law, “Avó how do you make arroz doce?” We know that a Google search will place all of these recipes at our fingertips, but we figured there was something endearing about photographing real avós in their kitchens, making traditional recipes that have made them famous—within their families. Naturally, issue 001 featured my mother-in-law, Avó Rosa Dantas making her “famous” arroz doce [rice pudding] and since then we’ve had the pleasure of photographing [and tasting] many fantastic dishes made by the hands of many wonderful people, but nobody was able to make a pastel de nata—believe us, we’ve asked.

It turns out the pastel de nata is not something typically made in Portuguese homes. Recipes for the nata aren’t handed down from generation to generation. They leave that dish to the professionals for one simple reason—you need a very, very hot oven. Commercial ovens in bakeries blast out 425ºC [800ºF] of heat, whereas at home, we have to settle for 260ºC [500ºF] if we’re lucky.

Enter Avó Fernanda. Although she had never made natas, she loves baking, is very good at it, and most importantly,  isn’t afraid to try new things. A week before the shoot, Fernanda went to work with her mother and daughters trying various recipes. Making small batches, they tweaked the ingredients and experimented with different heat and bake times trying to achieve the perfect homemade nata.

If you haven’t tried a pastel de nata, I’m sorry. My suggestion is that you stop reading and run to find one now… Get going, I’ll wait while you indulge in two bites of creamy, sweet, custard encased in a crispy, flaky pastry shell. Let me know when your taste-buds come back to earth. Now do you know why this is the quintessential Portuguese dessert?

So finding a nata recipe online may be easy, but finding the original recipe is impossible. That secret has been closely guarded by the family who owns Pastéis de Belém—a pastry shop in Lisbon that purchased the recipe from the monks of Jerónimos Monastery. Go ahead, have another nata and I’ll tell you the story.

The exact year of when they were invented, and exact origins are a bit murky [the English were making egg tarts in the 12th century and before them, the French were messing around with custards], but the monks definitely perfected the dessert. According to legend, the monks, who originally discovered delectable pastries when they were based in France, had a bit of an egg yolk problem. At that time, laundry detergents hadn’t been invented, so the monks and nuns of the monastery used egg whites to starch their clothes—this left them with a surplus of egg whites. Not wanting to be wasteful, the monks started baking egg-based sweets and at some point in the 13th century, they landed on a winner and pastel de nata was born. They quietly churned these out [probably only sharing with friends] until Portugal’s Liberal Revolution of 1820. Sensing the impending closure of monasteries, the monks looked for ways to sustain themselves and started selling the pastries to a neighbouring sugar refinery. When the monasteries were finally closed in 1834, the secret recipe was sold to the owners of the sugar refinery and three years later, they opened the Fábrica de Pastéis de Belém to produce the pastéis de Belém [that’s how they branded their natas]. The pastry shop is still open to this day and is operated by decedents of the original family, using the same recipe to churn out over 22,000 natas each day [I’m good for five or six].

Avó Fernanda’s kitchen produces a significantly lower number but since she’s only been at it for a week, we’ll give her some time to get her count up.

When we showed up for the shoot, bright and early on a Sunday morning, Fernanda greeted us at the door with her assistant—neta [granddaughter in Portuguese] Selena. Seated at the counter in her highchair, two-year-old Selena helped avó stir the ingredients, then she took a short break to play with a lemon before ‘getting back to work,’ kneading the dough [although I’m pretty sure she was just playing with the dough, but I can’t confirm]. Fernanda told us how the homemade natas wouldn’t have the same blistered, caramelized top as the ones made in commercial ovens, but they tasted just as good.

In another kitchen, a few blocks away the experimentation continued. Fernanda’s sister Rosa Bandeira [“It’s a pot. It’s a meal. It’s a Cataplana” story from issue 007] was experimenting with a recipe of her own, using an air fryer to bake her pastéis de nata—the photo she sent me looked fantastic but until she offers up a sample, I can only take her word for it [nudge, nudge].

After the natas had baked and cooled, Selena volunteered for her final duty before nap time—official nata taste-tester, and although she didn’t comment, her grin said it all. “MMMMM!”

Now serving. Natas are best enjoyed warm with a dusting of cinnamon and an espresso on the side.

Wedding material. An old Portuguese proverb goes, “A bride who eats a pastel will never take off her ring.” Sure it may sound hokey, but do you want to risk it? The cost of a couple of natas is cheaper than a divorce!

1. OVEN TEMPERATURE: If your oven doesn’t reach 260ºc, don’t worry, just put it to maximum heat, and if it can do hotter, go for it! if you have a convection oven, this is the recipe to use that setting!

2. TINS: Pastel de nata tins work best but any tart mould or even a muffin tin will work. Since we’re working with lower heat than bakeries, we recommend using smaller tins. 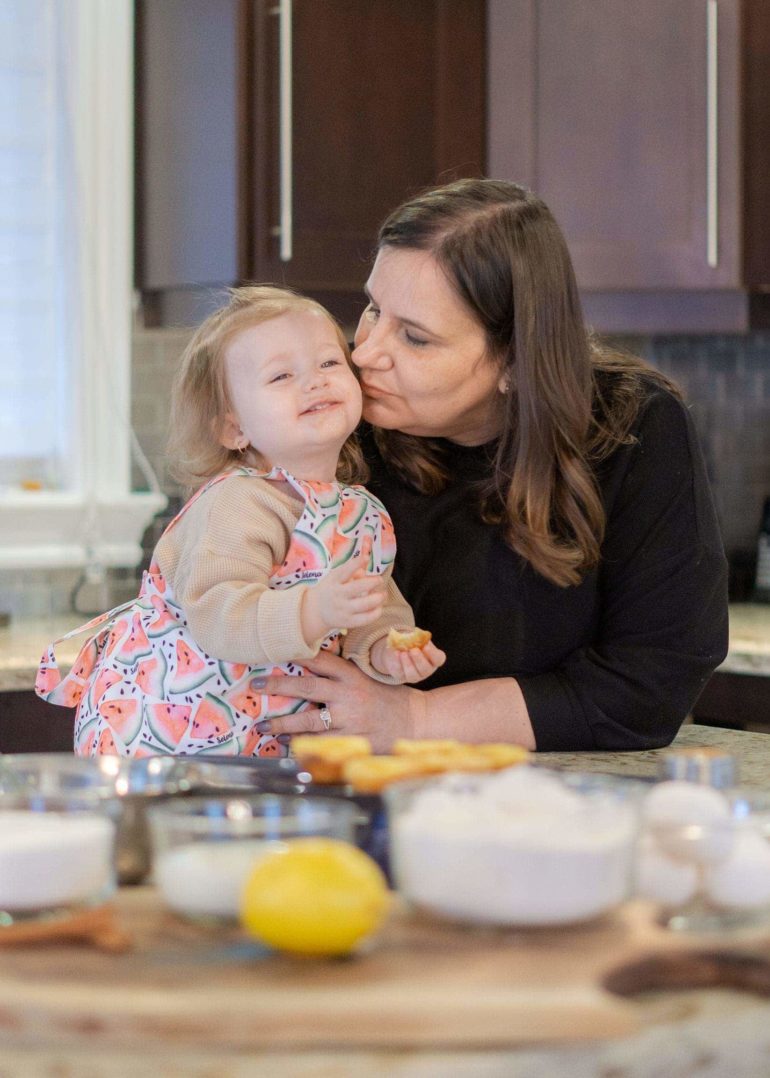 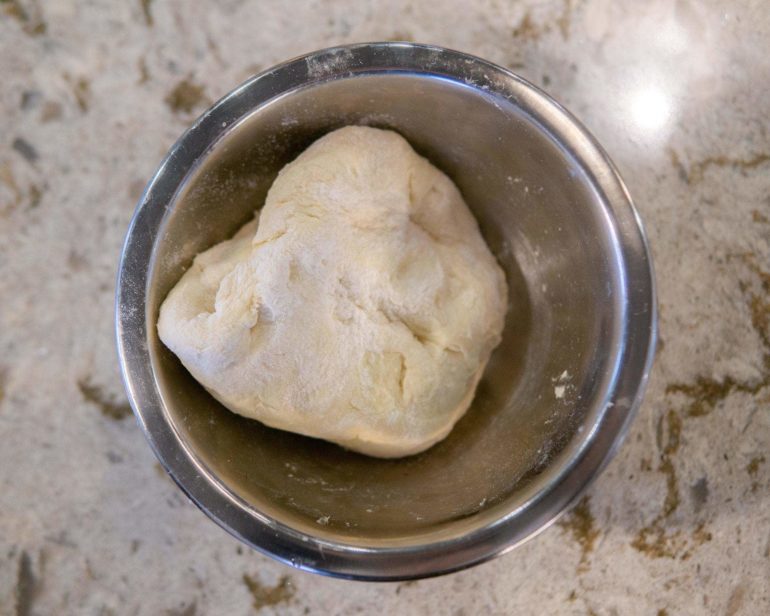 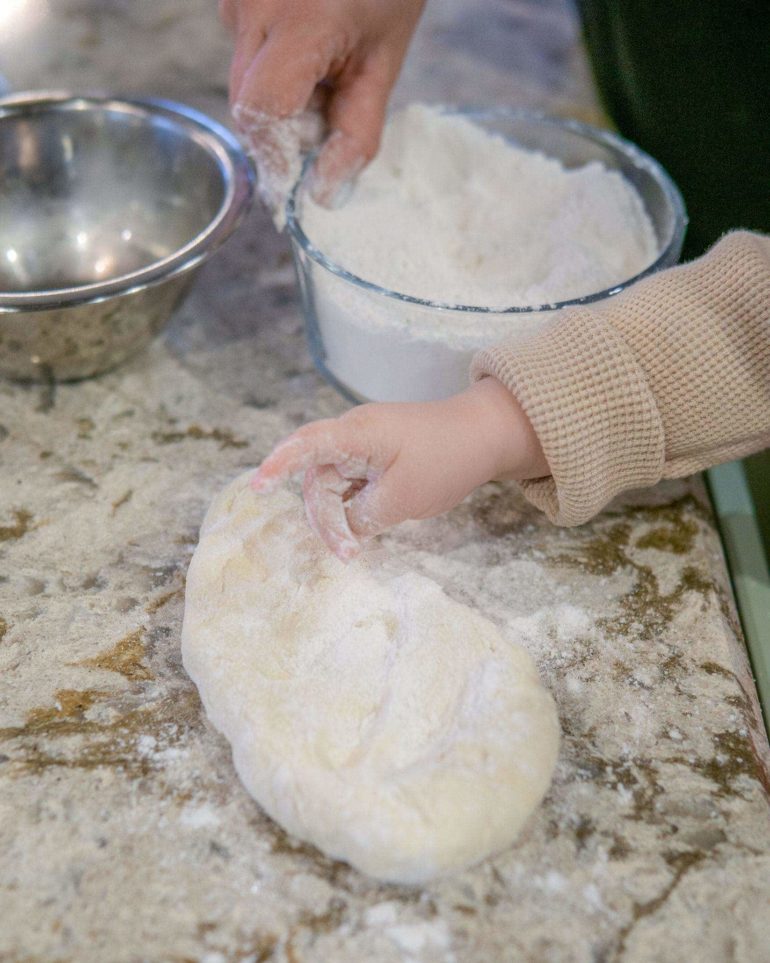 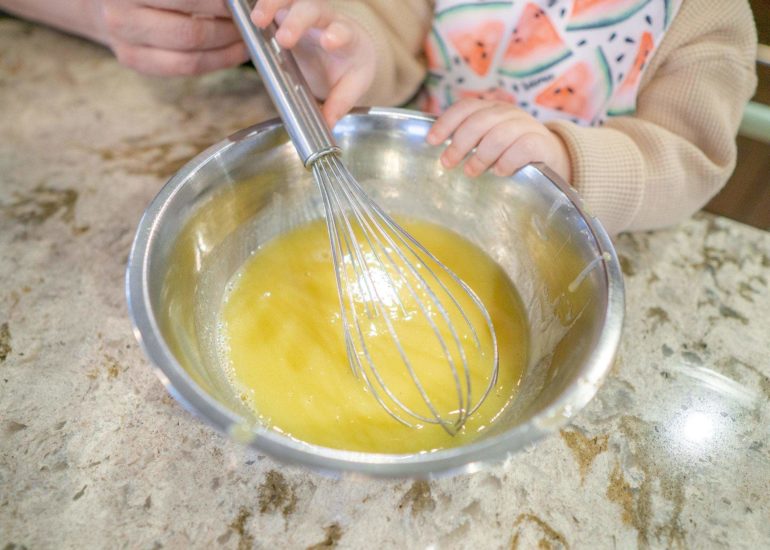 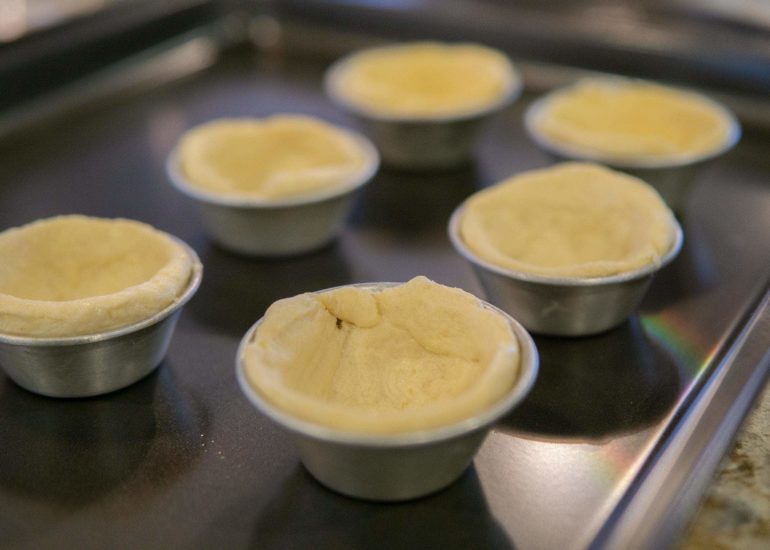 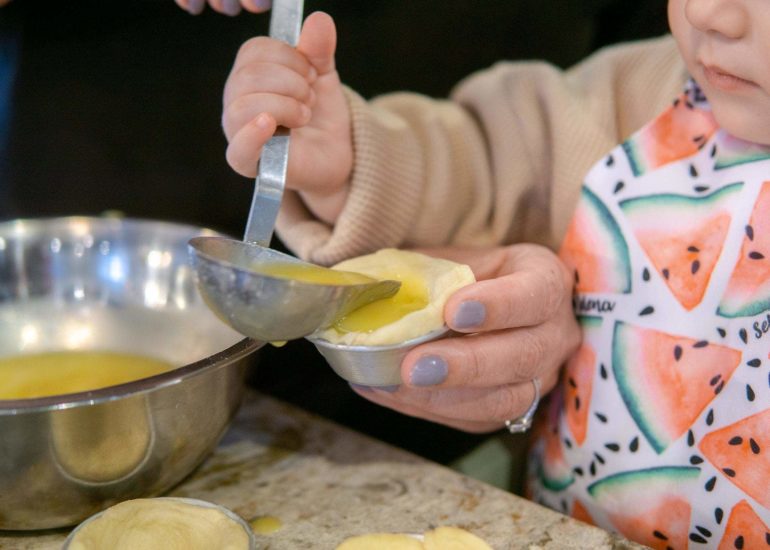 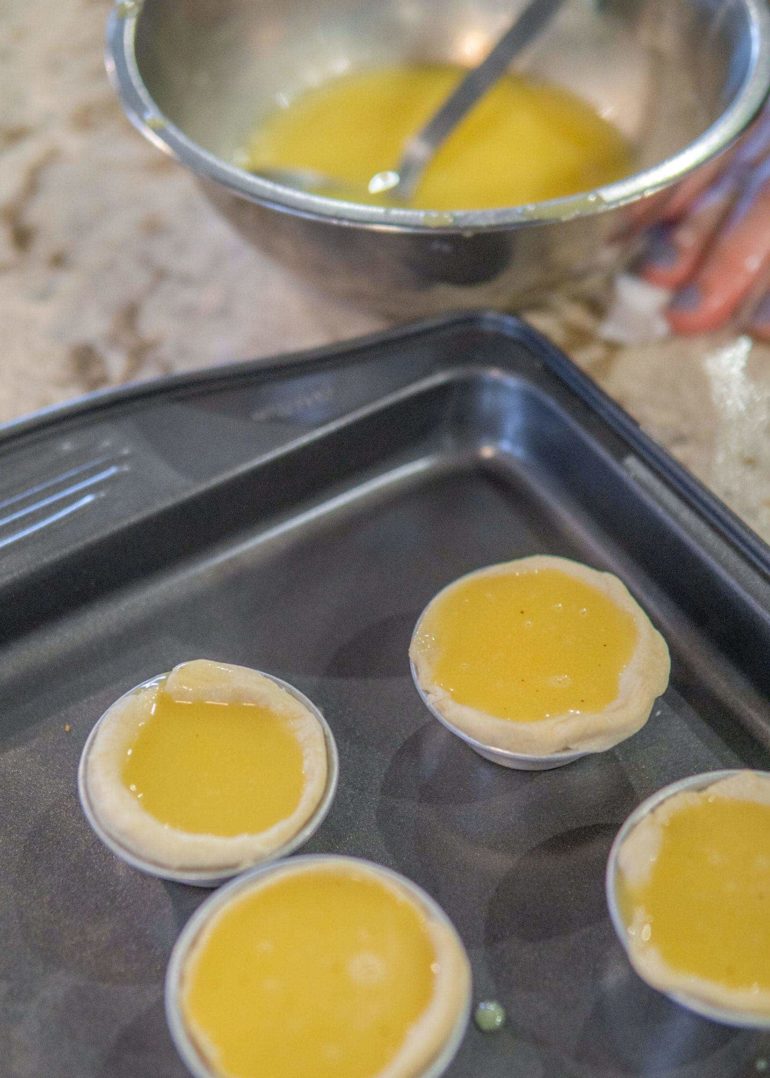 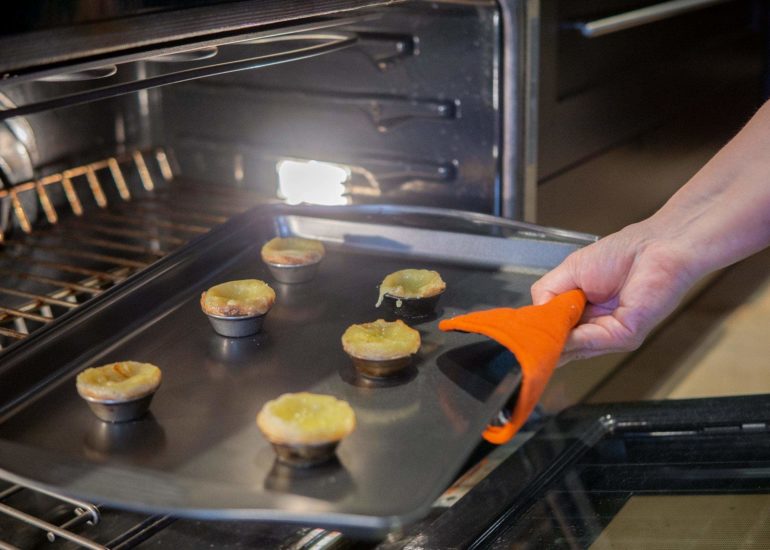 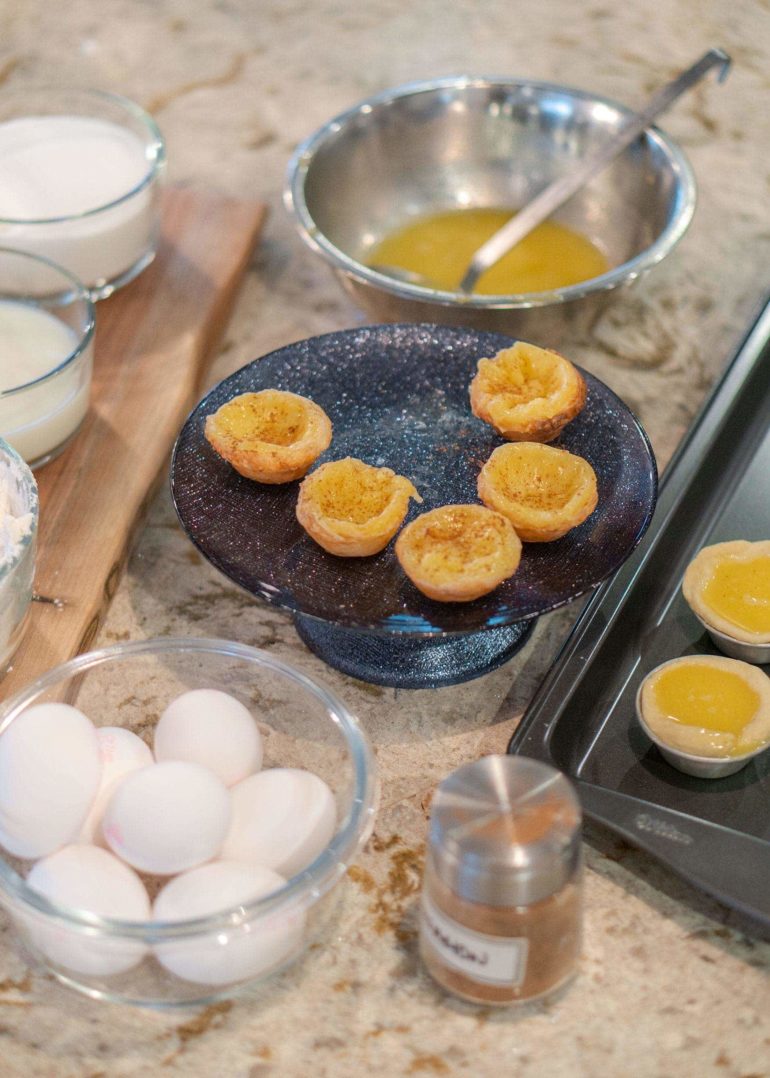 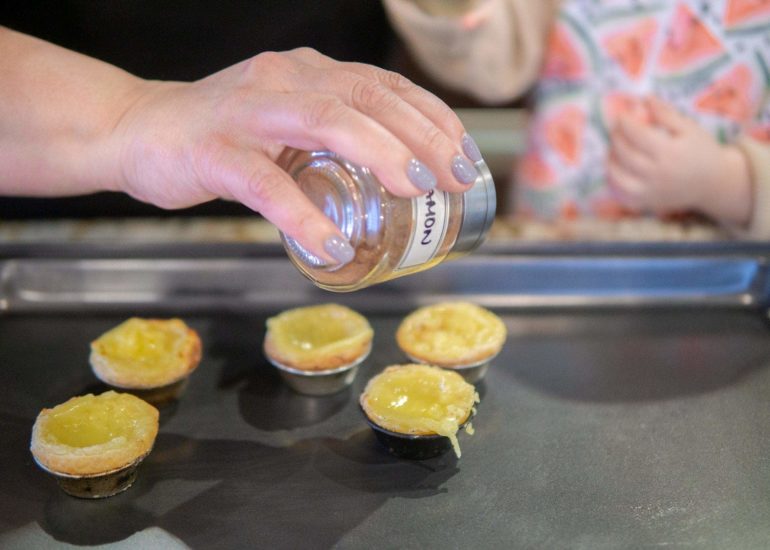 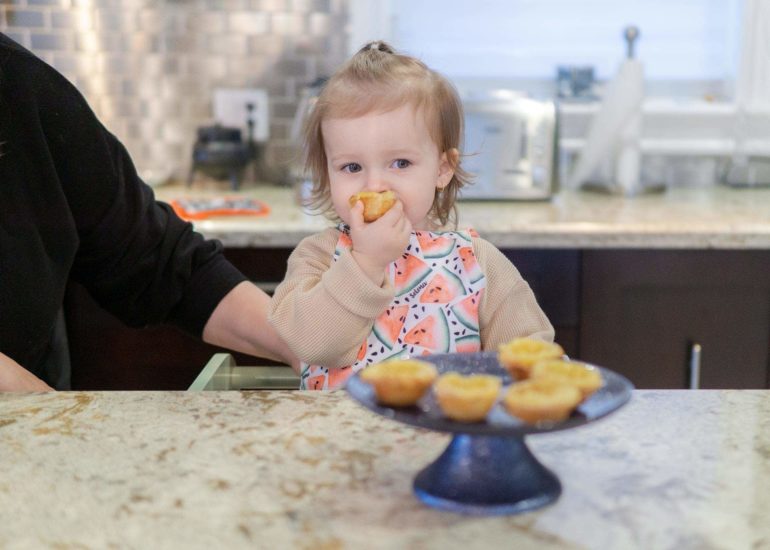