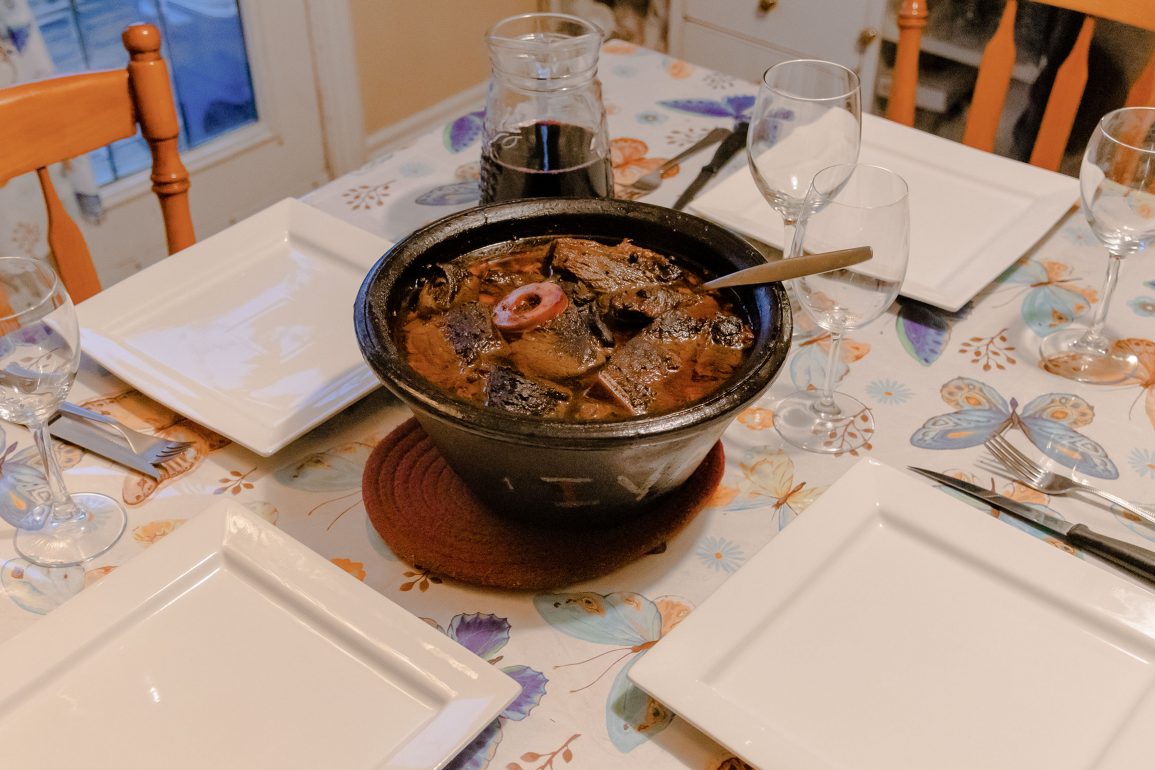 Bovine bliss from the island

Coscorões are pieces of fried dough commonly referred to as Portuguese Angel Wings. Coscorões are sweet and crunchy, have an orange flavor and a nice cinnamon finish (which I love!). Coscorões are what we showed up to photograph.

Coscorões were also our second choice. On our quest to find avós (and avôs) to share Portugal’s greatest recipes, it was suggested that I contact Iva Leal. “Her alcatra is to die for.” “She’s won awards for her alcatra recipe.” “Her alcatra melts in your mouth.” Which begged the question, “What is alcatra?” After Google told me it was a steaming wine-soaked pot-roast, I was sold and made the call, but there was a small problem—alcatra takes 6 hours to cook and Iva suggested coscorões.  I was disappointed and curious about this bovine delicacy which has eluded me for my whole life, so we did more research.

When the island of Terceira (Azores) was settled in 1450, this delicacy was also moved to the island and it would become part of Terceira’s traditional cuisine. Alcatra is an indispensable dish for the Terceirenses (people from Terceria), especially during the festive seasons where guests to any home are greeted with the fragrance of alcatra.

It is believed that the inhabitants of this island came from the Beira region of Portugal, where chanfana, a similar dish made with goat has its origins. It is likely that this served as inspiration for alcatra. And, why substitute beef for goat? Because cows are everywhere! Before Terceira became a tourist destination, recognized worldwide for its natural landscapes, cows outnumbered the people, with the beef and dairy industry being the island’s main source of income—it’s no wonder their nickname is the cheese island.

Like many dishes, alcatra was born from necessity. People would kill a cow to have meat for the year and needed to use the entire animal—waste was not an option. Since the whole cow can’t be carved into steaks, they cooked the bones and “lesser meat” in clay for several hours to make them tender and delicious.

Each parish and even each family take the traditional recipe and shapes it in their own way. The differences, however, are minor—some cook with more or less spices than others, but one thing is certain, the use of allspice is present in all of them. Traditionally, this delicacy used to be served with Portuguese sweet bread, also known as Massa Sovada, but nowadays many of the recipes include potatoes or rice as an accompaniment. Even alcatra itself has been adapted and variations have been created that include chicken, rabbit, beans and even octopus.

This recipe does have some secrets and tips that are important to follow. The first is patience. This is a dish that takes between 6 to 8 hours in the oven. The long cooking time allows the flavours to develop and makes the meat fall-off-the-bone tender. Garlic, onion, bacon, wine and spices all working their way into the meat and creating a delicious sauce for dipping your bread.

Which brings us to the cooking vessel. Although you can make this dish in a Dutch oven or even a crock pot, the traditional clay bowl is the preferred method. Shaped like a flowerpot, the more it is used, the darker the famous bowl will become. I’m told the secret is not only in the meat, but also in the clay bowl itself.

If you are going the traditional route, there are some tricks. If the bowl is new, it needs to be seasoned to avoid passing an earthy flavour to food. Let the bowl sit in cold water for 3 to 4 days and then left to dry overnight. Once dry, generously grease the inside of the bowl with butter or lard, then, add a piece of bacon and drizzle with white Madeira wine. Place the bowl in the oven and turn it to 350 ºF (170 ºC). It is important to always place the bowl in a cold oven to avoid cracking. Once the sauce starts to boil, turn off the heat and leave the bowl in the oven. Once it cools completely, throw out the sauce, rinse the bowl with water and dry it—the bowl is now ready to be used.

With all the bowl prep and cooking time, I understood why Iva suggested Coscorões and as we walked up the driveway and rang the doorbell, I was truly looking forward to satisfying my sweet tooth…but I’m not going to lie, when she opened the door and the scent of wine-soaked beef hit my nose, I knew we were in for something special. 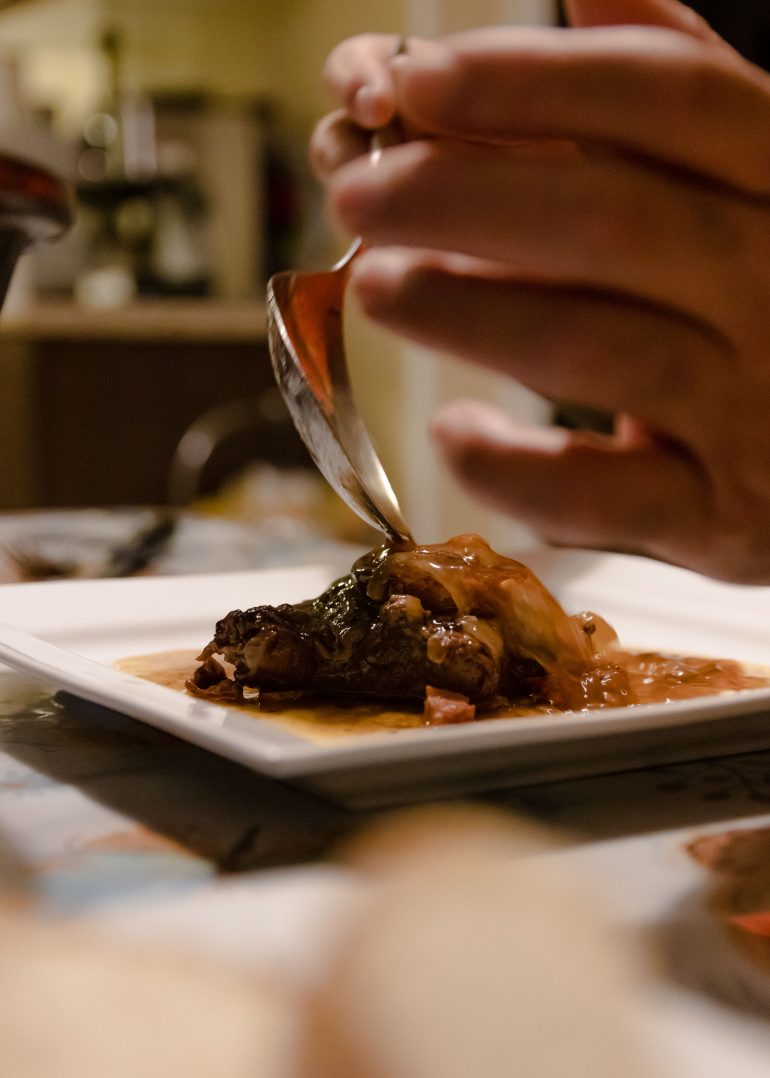 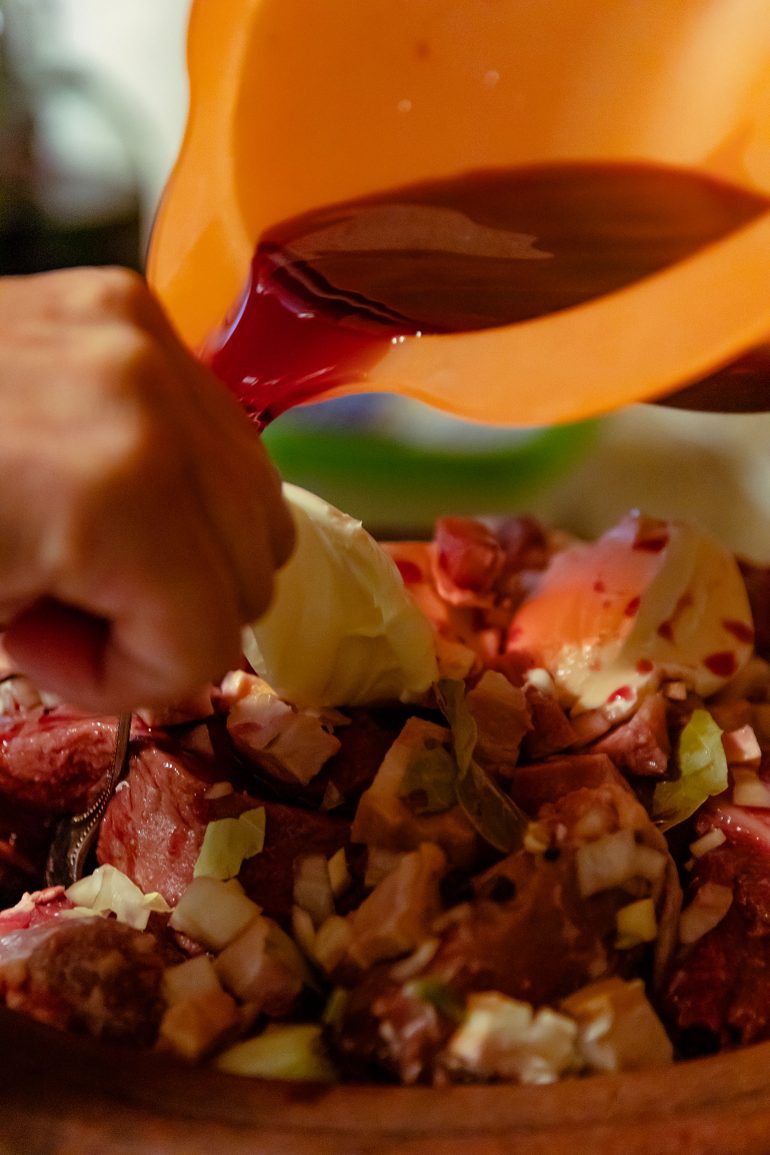 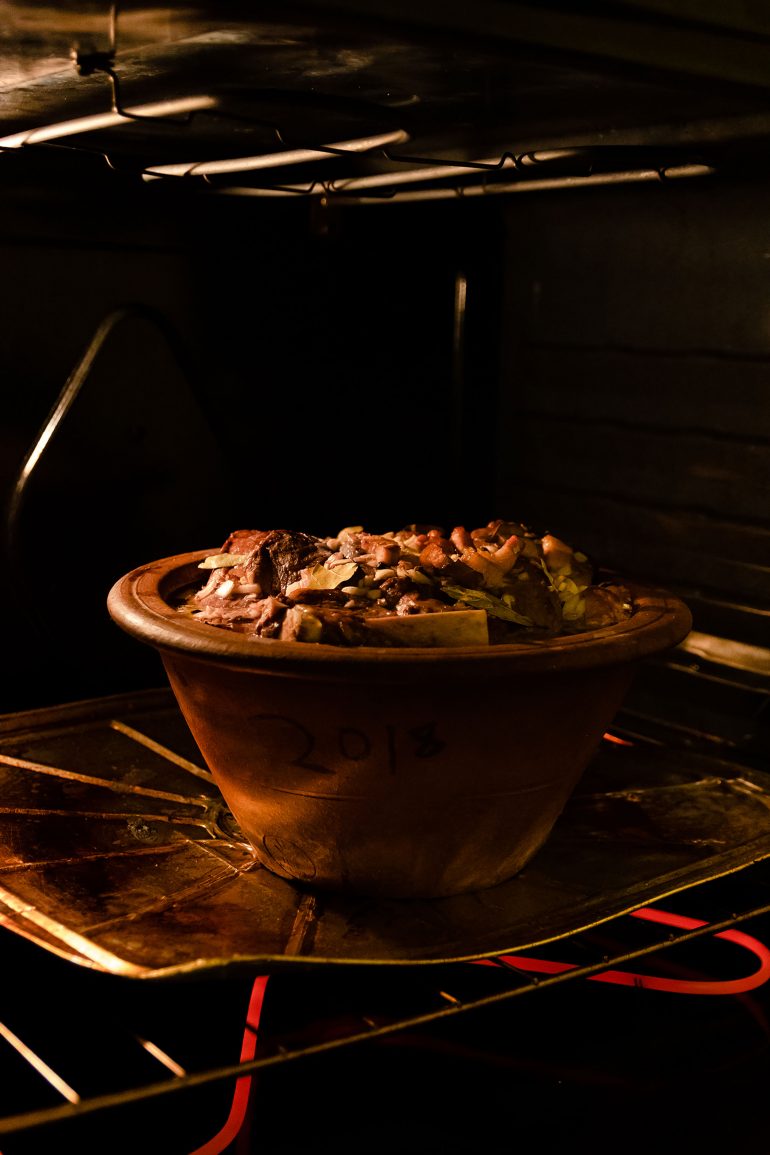