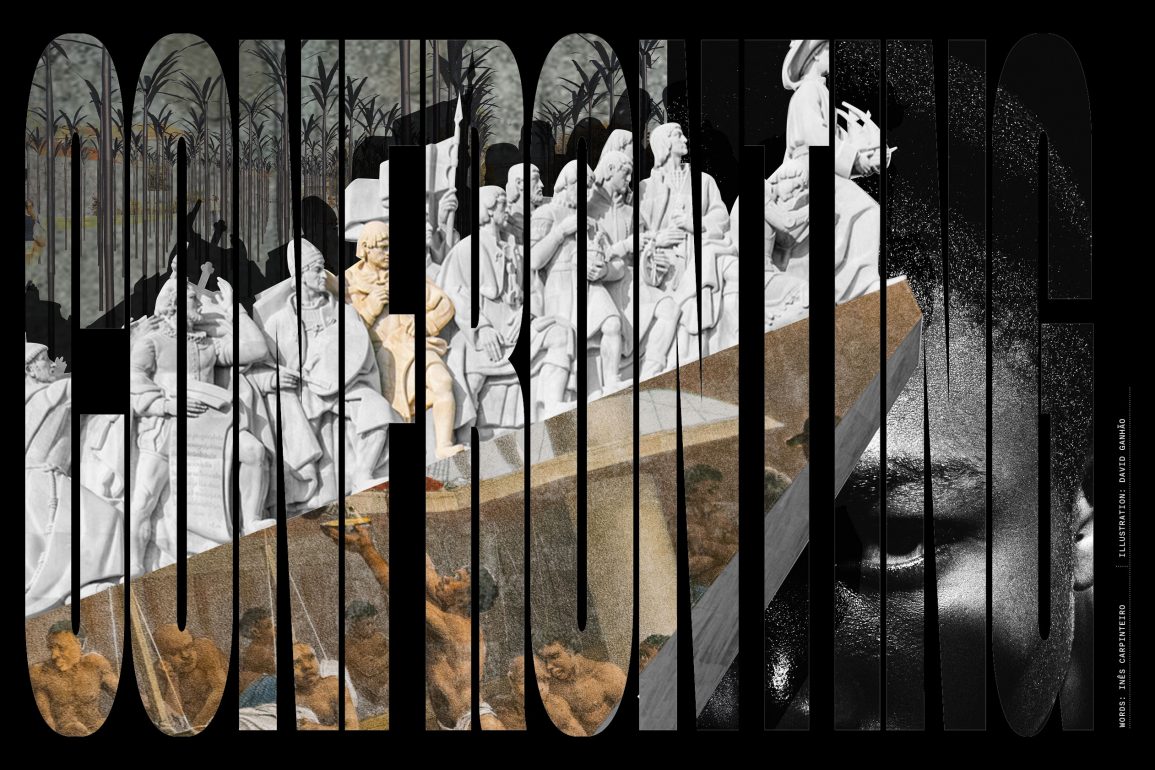 The Age of Discoveries is perhaps Portugal’s greatest point of pride. If on one hand we admire the journey through the unknown and the conquest of new lands, on the other we ignore or romanticize the dark side of colonialism. In the 15th century, Portugal initiated the transatlantic slave trade, and in a period of 400 years, kidnapped, expatriated and enslaved about 5.8 million people from Africa and Asia to Brazil.

The idea of race was created to establish a hierarchy and to legitimize treating select groups as inferiors. Gomes de Zurara (a Portuguese chronicler from the Age of Discovery) created the concept of sorting people into groups—not yet referred to as races—while writing Prince Henry the Navigator’s biography. Some consider that Zurara invented the “African race” when he described the people being sold at a slave auction in Lagos, Portugal. Despite varying in language, ethnicity and skin colour, he combined all of them into a single group who needed to be saved by the “civilized Europeans.”

This concept of race led to the justification of transatlantic slavery—not only was it an opportunity to cement the country’s status as a global power and increase its wealth, but it was a moral obligation needed to spread Christianity and modernization through the world.

Over the years, Portuguese leaders have tried to preserve this air of superiority. Under the dictatorship of Salazar (1932 to 1968), prevailed the theory that the Portuguese colonialism was exceptional and more humane than that of other countries. When the Portuguese World Exhibition was held in Lisbon in 1940, Salazar used the opportunity as a pretentious act of propaganda. Lusotropicalism promoted the idea that the Portuguese empire was a single political unit that was spread across multiple continents, was multi-racial, and where reigned a peaceful co-existence between different people and cultures. The way Portugal recalls historic facts refers to the impression that the country had a crucial role in civilization, fighting primitivism and contributing to the development of those communities. Here lays the idea they have been perpetuating—a benign colonialism where Portugal was the good guy.

However, a different reality was on display in the colonies. Indigenous subjects of Portuguese rule had an inferior status and were considered less civilized. The only way for non-whites to gain access to education and other privileges in the colonies would be through renouncing their own culture, assuming Catholicism, learning the Portuguese language and customs, to reach the status of “assimilated”. Exploitation and forced labour were a daily and normalized reality in the colonies.

Portugal was one of the first countries to implement slavery and one of the last to continue reaping its fruits. While the world was acknowledging the dark reality and the pain they had been inflicting, Portugal was holding tight to its colonies. In 1960, during the independence movements, Salazar ordered the construction of the Padrão dos Descobrimentos (Monument of the Discoveries) to keep the ideals of that time alive. Located on the Tagus River in Lisbon, the monument sits in front of Rosa-dos-Ventos—a massive compass rose—a gift from the apartheid regime of South Africa to the Portuguese dictatorship.

Just over 40 years ago, Portugal was at war trying to repress the independence movements of African colonies. Leaving Angola, Mozambique, Cape Verde and Guinea Bissau in a state of devastation after almost 20 years of war, massacres and subjugation, followed by the repatriation of the Portuguese who lived in these countries. Labeled as retornados (those who have returned), they too were subjected to discriminatory acts.

Despite proclamations that Portugal is not racist, but simply has racism in it—can a country that for centuries viewed certain races as inferiors, manage to have a new vision today?

In Portugal’s legislation, in its courts, in its healthcare and education systems, there is no racist content—even the Constitution prohibits manifestations of racism—this is where those who do not want to consider their country bigoted support their theory. However, the legislation also bans gender discrimination, but Portugal remains a sexist country, where women struggle against economical and social subordination, and where domestic violence continues to be one of the country’s prevalent social issues. Therefore, it is not enough to look at legislation to understand what a society really experiences. In spite of right-wing politics considering this issue to be a sensationalist coup from the left, the discussion has been intensified with the rise of the far right and the Black Lives Matter movement.

Portugal is a country bathed by the Atlantic, with a great climate, a rich history, incredible cuisine and hardworking and respectable people—some would call this paradise, but it’s not… yet. The periphery of large cities continues to show their evident poverty, where minorities are marginalized and where contact with the police often goes wrong. This is where people are often placed in the same bag, if one steals, they are all thieves, at least in the view of André Ventura, the leader of the far-right party Chega. His rise in popularity is proof that racism is alive and well in Portugal, that intolerance is settling in and that today, the values of democracy are falling.

According to a study by European Social Survey, more than 60% of Portuguese people express racist beliefs. However, from 2009 to 2018, the Minister of Justice did not register any condemnation for discrimination. Racism is even present in the Portuguese language. Expressions that are often used without being totally aware of their connotation—phrases like “am I black?” when we feel ignored or neglected. So, what can we say about a country that criminalizes racism, but does not condemn it?

In the case of Cape Verdean student Luís Giovani who was killed in late 2019, beaten violently by a group of young people, the prosecutor’s office accused the seven suspects of qualified homicide but concluded that the crime was not racially motivated. In 2020, an Angolan-Portuguese woman was beaten by a police after an argument that stemmed when she forgot her daughter’s bus pass. The following month, two Brazilian women were attacked by the police outside of a nightclub. It’s true that it can be debatable whether these cases had racist motivations, however, in that same month, Moussa Marega, a footballer with FC Porto, walked off the pitch in the middle of a game with Vitória de Guimarães after their fans shouted racist insults against the athlete.

A few months after that, came another case that became the ultimate tipping point in this series of conflict and indignation; the murder of black actor Bruno Candé. The actor was shot four times at point-blank range, in broad daylight, on a busy street in the outskirts of Lisbon. Witnesses stated that three days earlier, he had been threatened by the aggressor, who reportedly uttered several racist insults. “Go back to your land! You have your whole family in the senzala and you should also be there!”— a reference to the colonial era slave quarters. The murderer was Evaristo Marinho, 76 years old, who had completed military service in Angola between 1966 and 1968. In prison, he has reporedly bragged that, “In Angola, I killed several like this [referring to Candé]”

These are some of the many examples. Whether Portugal is a racist country or not is a topic open for discussion, but one thing is certain, Portugal has been a country tolerant of racism.

Until recently, Portugal has failed to present an objective view of historic events. There has never been an explicit reference, memorial or monument recognizing the millions of lives that were impacted by slavery. On the contrary, there are numerous monuments and statues dedicated to navigators and missionary priests responsible for the conversion of Africans and Indigenous peoples to Catholicism, or the soldiers who fought in the colony wars. Finally, in 2017, the Djass Afro-descendent Association (NGO) won a popular vote for public funds, giving the opportunity for black people to tell their story—what they lived and resisted.

The funds were used to design “Plantation – Prosperity and Nightmare” a monument by the Angolan artist Kiluanji Kia Henda. It intends to raise people’s awareness, empathy and reflection on questions of slavery, colonialism and post-colonialism. As Kiluanji Kia Henda highlights “The modern world would not exist if it was not for enslavement. The modernity you see here was built on the backs of black people. It’s important that there is awareness about that.” The memorial is installed in Campo das Cebolas, Lisbon and will be officially unveiled this year. Composed with rows of black aluminium sugar cane, each three meters high, this piece symbolizes a tragic past but, hopefully, a prosperous future.

History has been partially presented and taught in schools through a Eurocentric vision. Portugal has been ignoring part of the story because it goes against their national identity. It’s fundamental for all Portuguese people to amplify and empower the voices of the past so we can learn from them. It is not about imposing guilt, but about reflecting on our past and creating the road we want to take into the future.