Food is the language of love

By now you’ve definitely realized that cod fish is a key ingredient in Portuguese cuisine—a tradition that has been alive since the Romans set foot on the Iberian Peninsula. Portugal is a very small country but represents 20% of the global consumption of cod, which translates to 35kg of this white fish per year, per person. Much like the invasion of pumpkin flavours in the fall, there are no boundaries when it comes to where cod should be added. Thankfully [for some] pumpkin season only lasts for a few months, then we have a nine-month pumpkin-free period to cleanse our pallets… cod on the other hand, is used all year round and makes an appearance at every festivity. The love affair is so deep that the Portuguese invented salted cod in order to preserve it longer. After a fishing trip, entrails are removed, the fish is cut into pieces, and instead of leaving it to dry in the sun as it was done in the Viking era, they would place it inside wooden barrels, covered with large amounts of salt. Although cod doesn’t swim in Portuguese waters, the obsession with this fish can be explained by its versatility which has been a great source of culinary inspiration of the centuries.

The ability to grab fresh ingredients and build innovative delicacies appears to be in my blood line. Thinking about my childhood, most memories involve a certain smell wafting from the kitchen—my grandparents cooking whatever their sweet grandchildren desired, my mother planning huge feasts to celebrate my birthday, or dinner on a Tuesday because in my house, any day would serve as an excuse to serve an over-the-top meal. That’s the power food has, it becomes engraved in our memories. It’s used to celebrate accomplishments, to show people you care about them and even to reward you after a tough day – regarding the last one, psychologists may say that’s not exactly healthy, but Portuguese totally support this practice.

Regarding the culinary scene at my house, being a kid was simply great… being my mother, not so much. While I was blessed with a mother that knows how to cook those marvellous Portuguese dishes that make most people salivate just thinking about them, she was not blessed with children that fully appreciated her cooking. I remember that most nights, my mother would prepare two full meals at dinner to serve just three people, and later four, once my sister joined me in the picky eating brigade. While my father would eat the very best that gastronomy has to offer, we would rather indulge the blue-plate special—usually pasta, sausages, and cheese… children have exquisite taste.

I remember her spending hours preparing banquets  that she would serve to her friends and family, writing recipes in a dossier that [I believe] she considered to have as much value as our own lives. And at the beginning of each meal, she would stop, watch us take the first bite and wait for a reaction to judge her success. I understand now that to my mother [and her family] food is the language of love. All those hours of prepping, cooking and a pile of dishes to clean at the end, simply means she loves you.

On my mother’s side of the family, everyone has the gift of cooking [Note: I was not blessed with said gift, and if I’m being totally honest, I also don’t have much faith in our future generations—I hope they prove me wrong.]. My family would gather every chance they got to share a delicious meal, for no good reason other than simply spending time together. The kitchen would turn into a cooking class and on occasion we’d see a little bit of a competitive spirit pop up. Having a family that cooks extremely well is both a blessing and a curse. I definitely enjoy meals that are so good  I will [as they say in Portugal] “eat and cry for more” but I can’t make them. I got so used to taking the backseat—and by that, I mean to wait for the yell “come to the table.” That I haven’t taken interest in learning how to make most traditional dishes, yet I’ve always considered cooking their superpower, and it’s pretty amazing. My mother works as a chef in a restaurant, her father used to cook on pirate ships and at 70, her mother still works as a chef in a restaurant. Actually, that restaurant is, in some way, also part of our family. It’s like a ritual of some sort—three generations of women from my family have [mostly] entered the workforce via that restaurant, myself included. It was also there that I saw this dish for the very first [and only] time… and now it’s time to share it with the world. This was a recipe that my mother inherited from her mother and even I am confident I can pull this one off.

So don’t stress, Bacalhau à Campino was chosen because it’s the perfect dish for when you want to impress but don’t want to have a crazy amount of work or simply when you want to make the most of your leftovers. And it’s incredibly simple.

1 PÃO CASEIRO:
LITERALLY TRANSLATES TO “HOMEMADE BREAD.” YOU CAN PURCHASE THIS LARGE LOAF AT ANY PORTUGUESE BAKERY, SUBSTITUTE WITH YOUR FAVOURITE, OR MAKE YOUR OWN!

2 DESALTING COD:
ADD FISH TO A CERAMIC OR GLASS CONTAINER, FILL WITH WATER AND PLACE IN REFRIGERATOR. SOAK FOR AT LEAST 48H, REPLACING THE WATER EVERY 8-10. 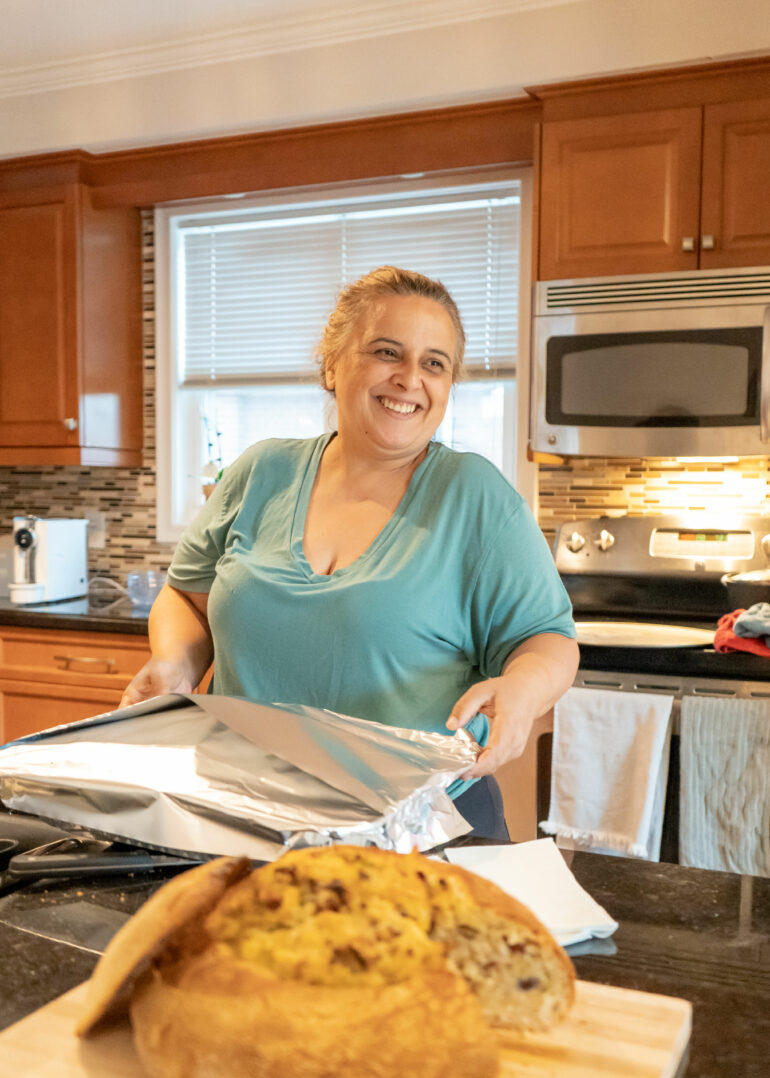 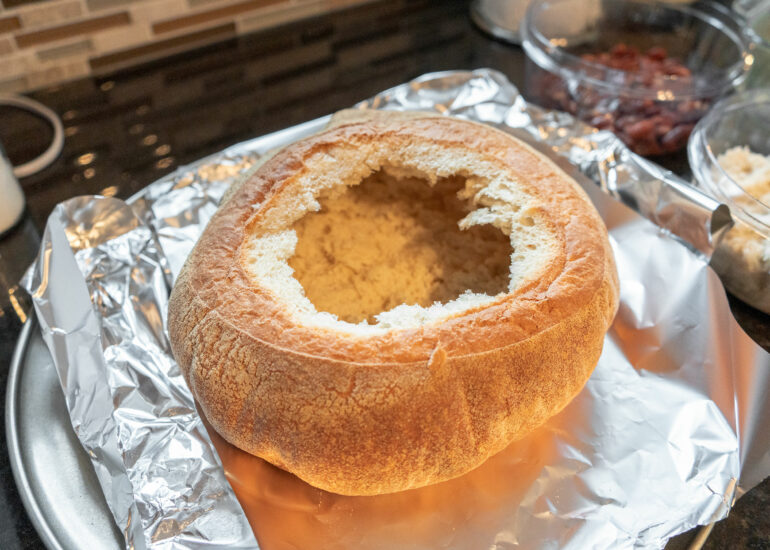 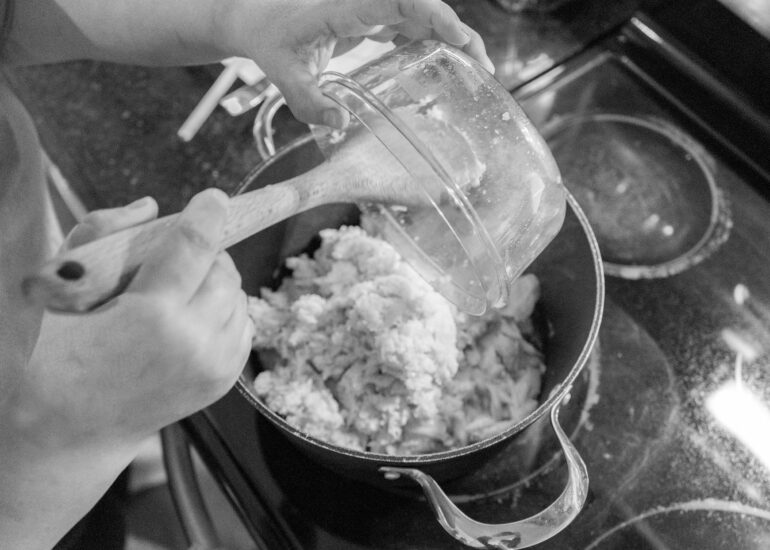 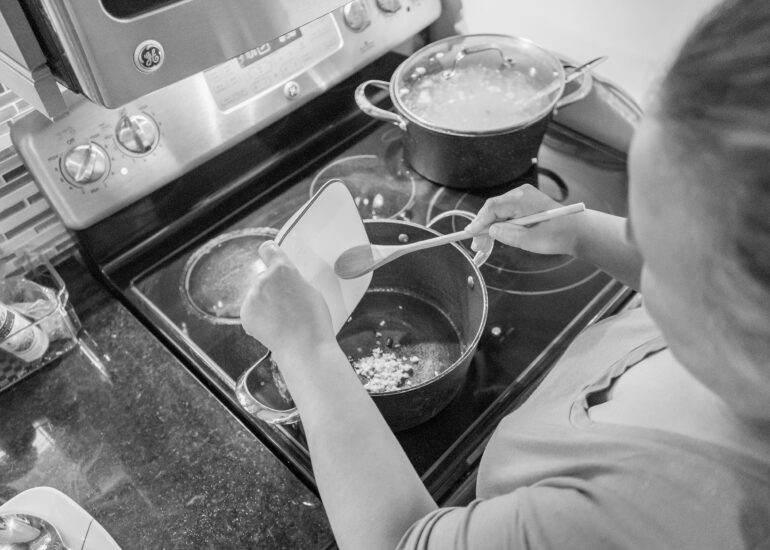 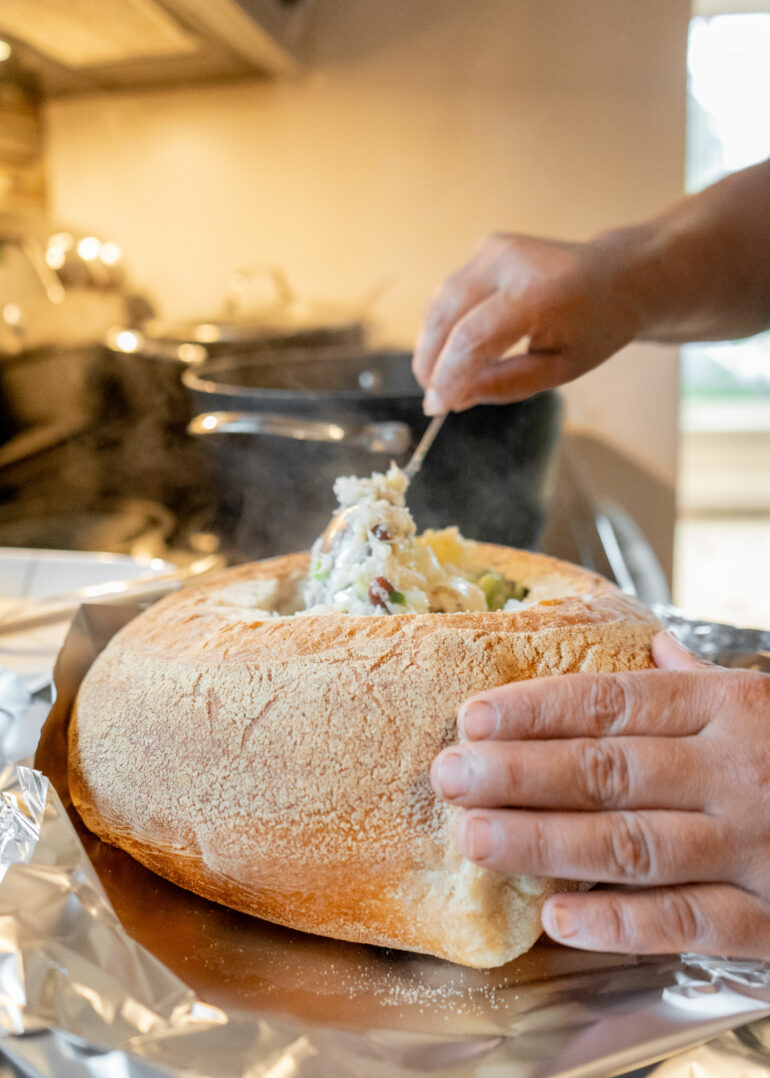 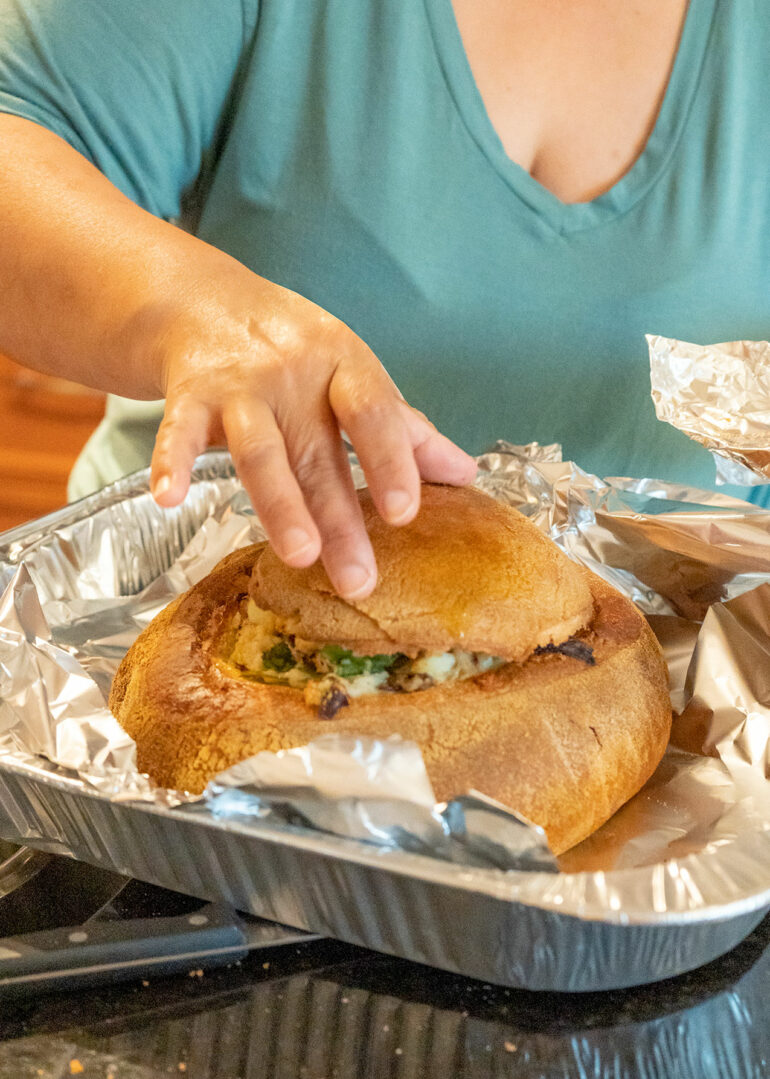 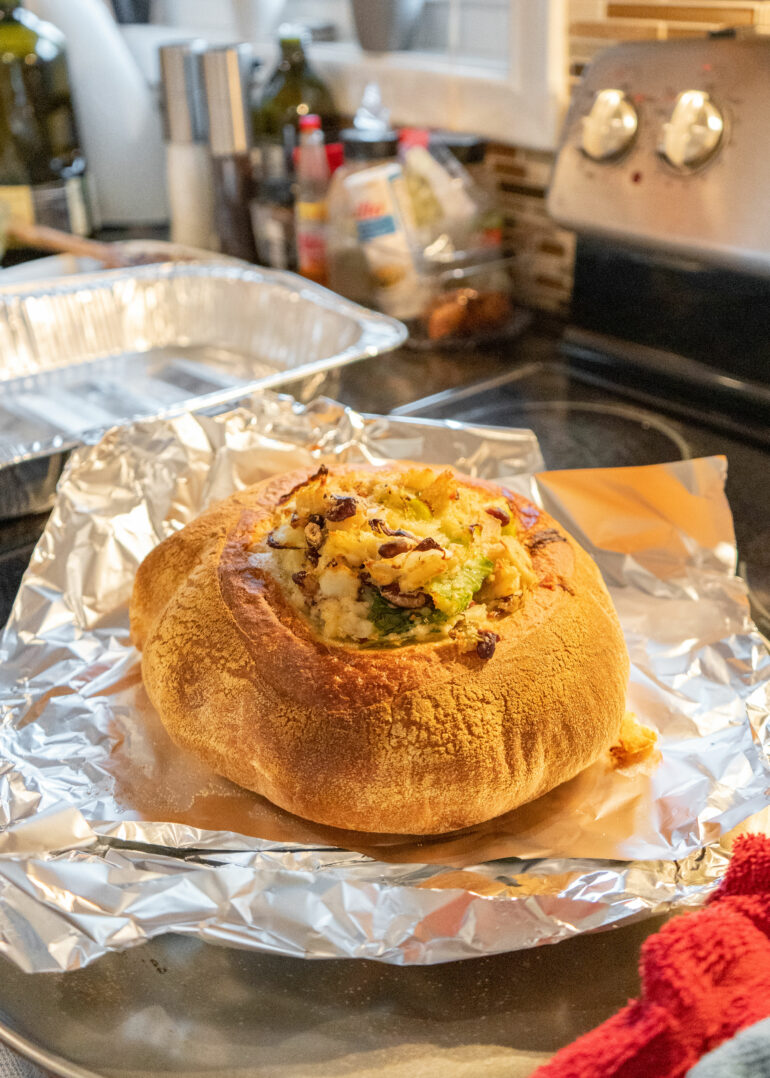 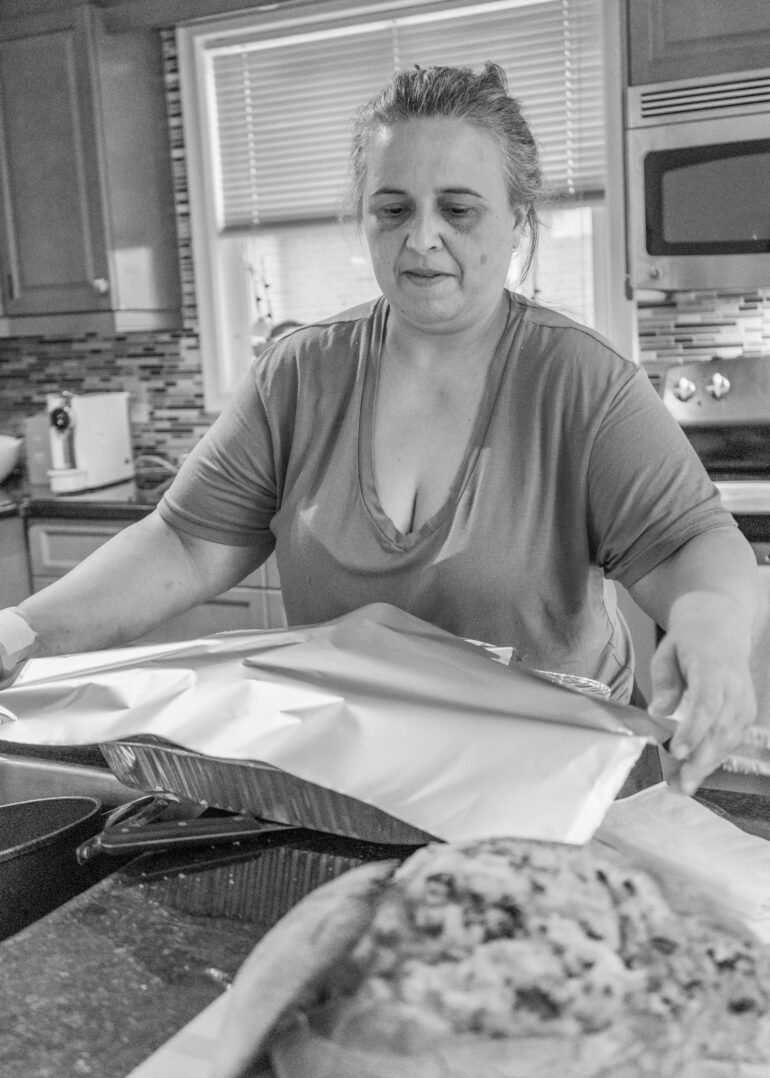