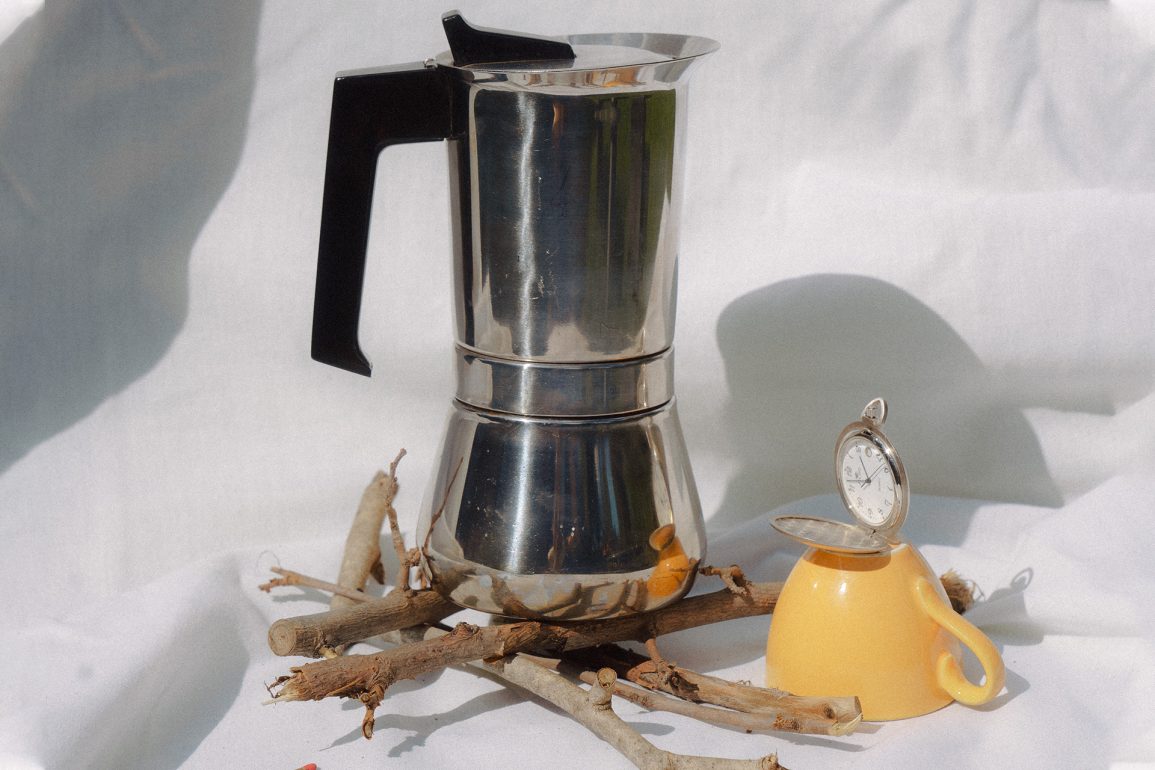 Once upon a time in a land far-far away, a magical pot was given to a princess on her wedding day. The magical pot was used daily by the princess to create gold—liquid gold—which she offered to everyone who would visit the castle. The magical pot was a treasured heirloom which would eventually be handed down to Prince Nicola, the firstborn but unfortunately this was not to happen. Against his mother’s will, Nicola took the magical pot on a quest to the land of sun and sand with a promise to protect it with his life. When the pot was left alone and unguarded, two greedy neighbours, who had followed Nicola, entered and kidnapped the pot, forcing it to brew them a fresh batch of gold. The pot brewed and brewed but the attackers napped and ignored the bubbling sounds being spewed forth, signalling a full pot of gold. When they finally awoke, the pot had perished to the flames, ending up as a pile of melted aluminum, never to brew again.

The Moka pot, affectionately known as the macchinetta by my Italian friends or the stovetop espresso machine by others, was a revolution to the serious coffee drinker. Pre-1933, espresso drinking was largely a public affair since machines were large, expensive and not built for home use. Alfonso Bialetti, an Italian engineer changed that by inventing the Moka Express—small, affordable, stylish.

By the 1950s, Moka’s invasion was well underway, and stovetops everywhere were decorated with the modern kitchen utensil. Its simple design had only three detachable pieces: the bottom chamber which is filled with hot water, the filter basket which holds the ground coffee, and the top chamber where the boiling coffee ends up.

Virtually unchanged since its invention, the macchinetta has served us well for many decades. Countless meals have ended with the sound of the macchinetta boiling over and filling up with its liquid gold, though recently many people are abandoning tradition in favour of convenience.

These single use coffee makers have been popping up in kitchens ready to serve any flavour  from dark hot chocolate to vanilla biscotti in minutes but at what cost? By now we are all aware that the pods are either made of plastic or aluminium and are taking up too much space in our land fills, but let’s also look at the health issues that they may cause—heating up plastic and injecting its chemicals (bad); aluminum is linked to autism, anxiety, depression, Alzheimers and other diseases (more bad); pod machines cannot be drained so their dark, warm and moist lines are a prime breeding ground for mold (very bad and yucky). Even though so many negatives are attached to coffee pods, demand is still huge—I guess it’s hard to resist Nespresso when its Global Ambassador is George Clooney.

To me, the creativity of using the macchinetta and watching the golden liquid pour into the top chamber, will always outshine the instant gratification of the pod. Delicious.

I also love the stories the macchinetta has given us—it’s travelled to picnics, gone on camping trips, and the fairy tale at the beginning…it’s a true story. On her wedding day, Maria, my friend Nick’s mom, was gifted a macchinetta by her mother. Over 20 years later, Nick took off to Daytona Beach for a vacation with some friends (I will call them The Two Tonys so as not to incriminate anyone) and he asked his mother to borrow the pot. She reluctantly said yes, reminding him of its sentimental value and making him promise to be extra careful. After a long night of parties and drinking The Two Tonys arrived back at the hotel room and decided to fá coffee. They put the macchinetta on the stove and immediately fell asleep, waking up much later to the sound of the fire-alarm beeping. By then, the water had evaporated, the aluminum pot had melted and the lid’s plastic knob was the only recognizable piece—a sad ending to a wonderful piece of coffee engineering.