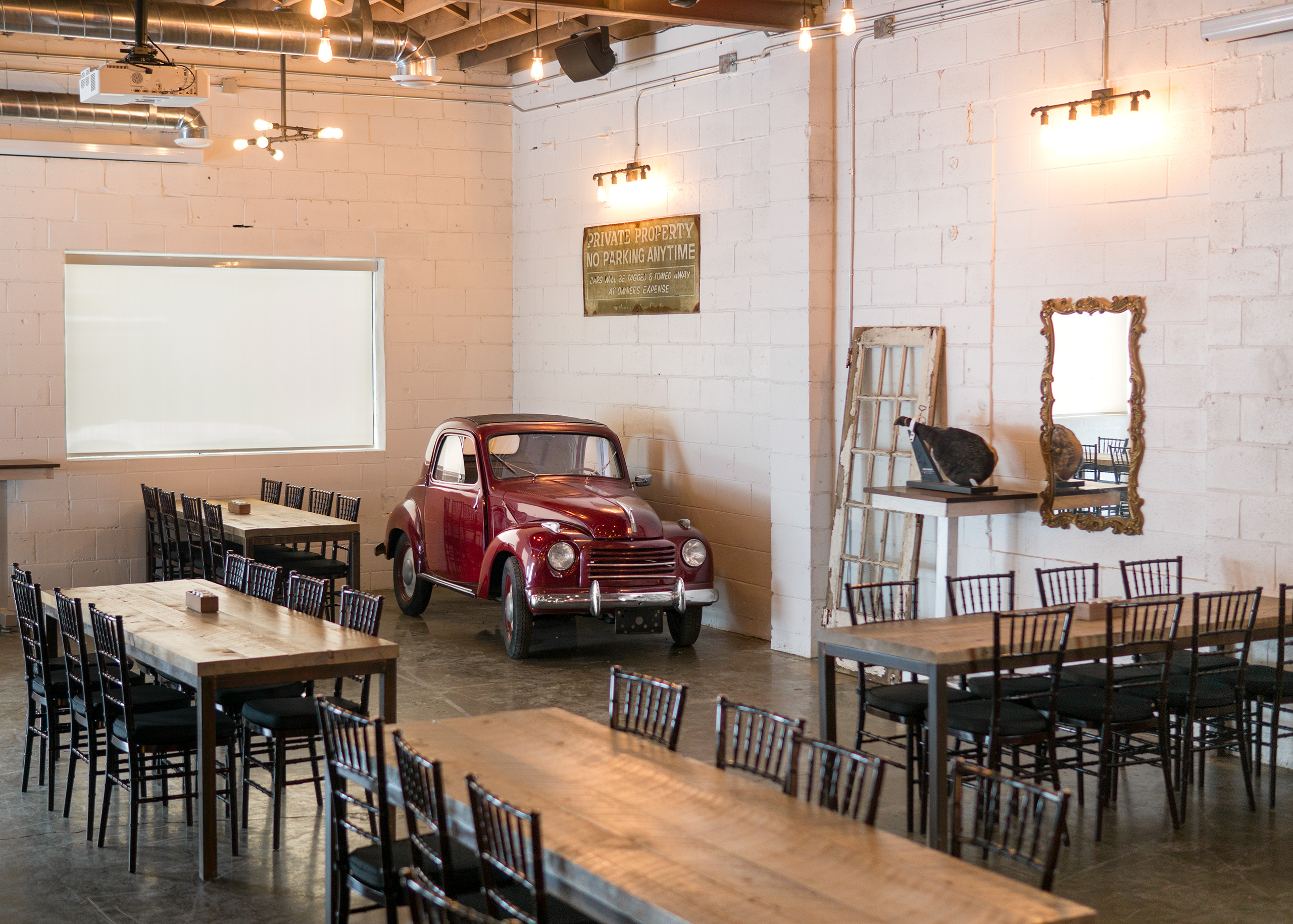 A lesson in Italian

SPEDUCCI (Noun)
spe-du-cci | \spe-’dü-chē\
(Also known as Spiedini and Arrosticini) Delicious meat skewers with origins in the mountainous region of Abruzzo, Italy. Traditionally made from lamb but are also made from beef, chicken or pork.

MERCATTO (Noun)
mer-catto | \mer’kato\
Market. A meeting place where you can buy anything from local produce to a full meal.

SALUMI (Noun)
sa-lumi | \sä’lŌŌmē\
Any cured Italian meats, usually made from pork, including prosciutto, and bresaola.

When it comes to choosing a restaurant, I am always indecisive, mainly because I don’t eat out much, so when I recently made dinner plans with an old friend, I asked him to pick the destination. He decided one of the places in Yorkdale Mall would make sense since it was centrally located and would be convenient for us both. After sitting down and chatting for a few minutes I blurted out, “We’re featuring Speducci Mercatto in the next edition of Luso Life, so I was going to suggest we go there. It’s close by, in an industrial park I think” He knew the place and loved it, so we packed up our things and off we went to “research” my next project.

Walking in I quickly took a survey of my surroundings—seating to my left; market to my right; deli counter with cured meat hanging everywhere; happy staff quickly moving around to serve the customers. The place was clean, modern and I was immediately sucked in by it’s vibe. We glanced at the menu and I decided to use the “when in Rome” philosophy, so I ordered speducci—lamb, beef and chicken (2 of each), with a side of rapini. It was simple, it was delicious and left me looking forward to my next visit. On my way out I spotted Rosie Scavuzzo, one of the two partners that own Speducci Mercatto—she takes care of the business side and Gabriele Paganelli takes care of the food—I introduced myself, left a few magazines and set up a date for our photoshoot/interview.

In the weeks that followed, I had a few conversations with other friends about food (this happens way too often) and I always brought up a “new” place I had “discovered”. As it turns out, most of my friends already knew about this hidden gem, they just hadn’t shared the secret with me. Some had been there for lunch while others liked the market and go there to purchase speducci to barbecue on their home grills.

So when I sat down with Gabriele, my first question was how does a restaurant in an industrial nook away from the city’s hip neighbourhoods become so well known?

“Where do you want me to start? When I came to Canada? My life in Italy before I came?” I, of course wanted to hear everything.

“I was the second child of nine children. We grew up on a farm, raising our own cows, pigs, etc. Every winter we were slaughtering four pigs to feed our family. Back home this is an event, so neighbours and family come to help and we return the favour by helping them. In the winter I’d assist 10-12 of these ‘graduations’.”

“When I grew up, I went to school and I took electronics to learn how to repair televisions and radios, that was my thought. I used to go to school far from town, so when I got home, my brothers and sisters had eaten everything, so I had to start cooking for myself. This is where the passion started, so I began cooking for family and friends. After my mandatory army service, I decided to switch careers and cook as a profession. It was good because I can’t eat a transistor, but can now eat whatever I create! My parents bought a small store in our hometown of Ravenna (a tourist destination in the Emilia-Romagna region of northern Italy) so I started cooking there as a summer job. Parmigiano, mortadella, a lot of the big salumi come from my area.” Salumi basically translates to cold cuts, a term which Gabriele dislikes because he says, “it isn’t as warm as the word salumi or charcuterie”. In the winter Paganelli would work in places where he could learn his specialty—gastronomy for takeout.

He made his way to Canada via a call from John Lettieri of Hero Burger fame, to open Lettieri, a cafe in Hazelton Lanes. With the idea of opening his own restaurant, Paganelli went on to work in new restaurants that were opening to gain experience. “In five years I worked at five different restaurants, then I opened my restaurant, Romagna Mia on Front Street in Toronto.” Paganelli operated that restaurant for 16 years (12 as Romagna Mia and four years as Paganelli’s Risotteria-Enoteca).

“I sold it and became semi-retired because my retiree job was to make salumi. I was raising wild boar on a farm I own near Wasaga Beach and I had opened a place in the east end to make salumi.” The story could have ended here, had he not been introduced to Rosie via a mutual friend…and that meeting almost didn’t happen. “When I first showed up, I ran away because after 16 years on Front Street, working at a place surrounded by old cars and a burned truck across the street seemed like a bad idea.” But Rosie was persistent and three months later he received another call to come help this new business. “Five years ago I came here to help out, and stayed. At the beginning it was me, Rosie, a butcher and a helper. Today, there are 52 of us working. That’s the basic story of how I ended up here.”

Gabriele decided to start with the name. “We were named Speducci, so we would make everything from speducci. At first we served sandwiches and on the skewer—to make a veal or chicken cutlet, we’d bread the speducci, fry it, put it on the bun and remove the stick. Slowly we added pasta, pizza and all the other things, now we’re more of a restaurant/market/butcher shop. It’s an Italian mess, which I love!”

I can relate to the ‘Italian mess’. Through my teens, I spent a lot of time at my friend Tony’s place and the kitchen table always ended up this way—bread, olives, pasta, and of course the homemade soppressata…which brings us back to the salumi. Gabriele didn’t abandon his salumi, he just made more. “Fifteen years ago I decided to make salumi because what I found here didn’t have my flavours—the flavours I grew up with. The pancetta is the base for many dishes so I started to make that first. Today, we make types of salami—horse, venison, elk, turkey and are opening a prosciutto bar to showcase a different selection of the meats.”

One of the things I loved most about Speducci Mercatto is that things are kept simple and authentic. Since they produce their salumi, the flavours are controlled by Gabriele, and this is something that can’t be taught. “You can learn technique on the Internet, but if you don’t have the flavours on your tongue, you can’t reproduce it.”

Unfortunately Speducci Mercatto didn’t help my indecisiveness, it only created more grief—should I order a salumi and cheese board or a pizza? Maybe a lamb chop and a few speducci…ooo the wild boar strozzapretti looks good…or maybe the bolognese tagliatelle topped with shaved parmigano….please send help. 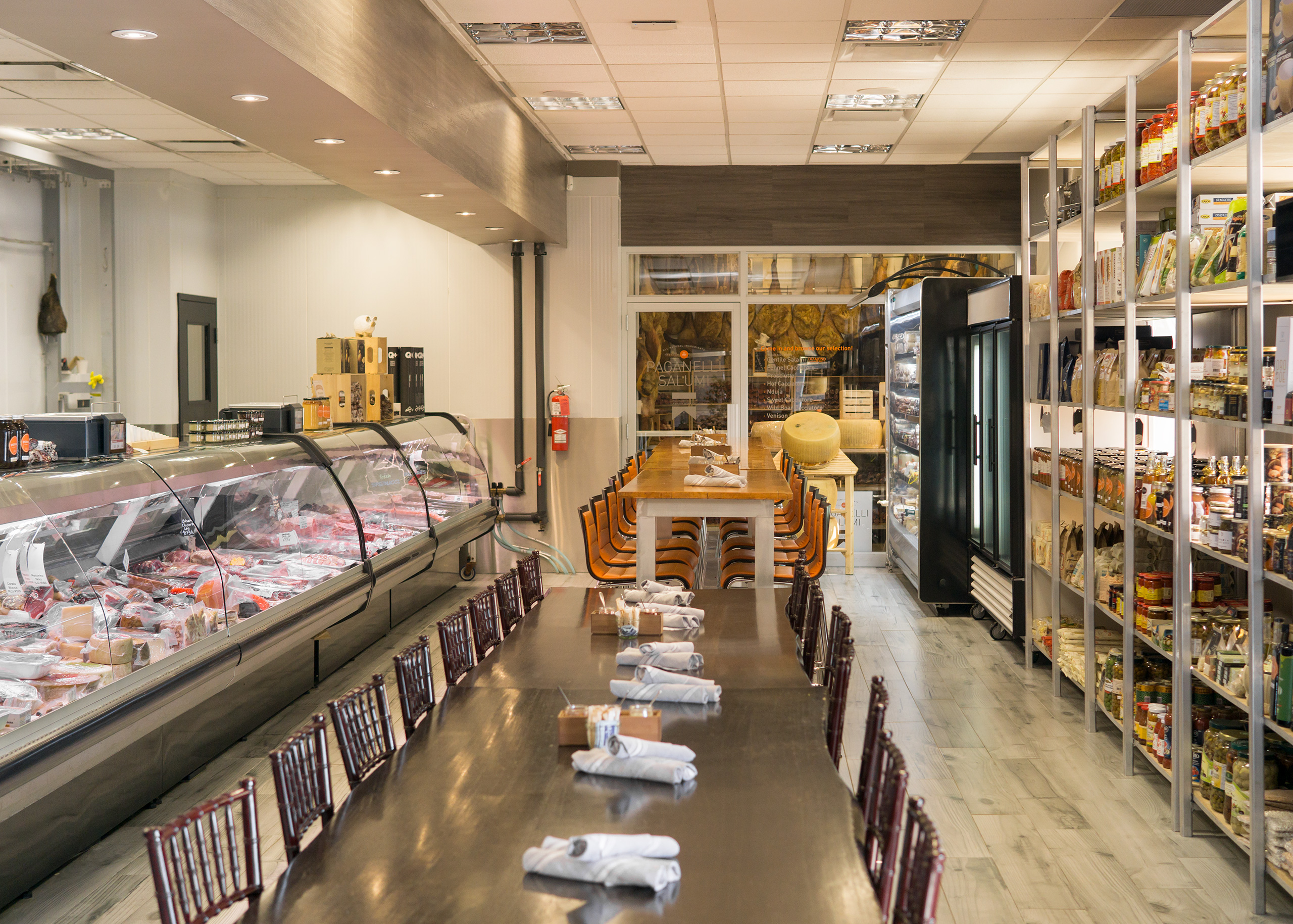 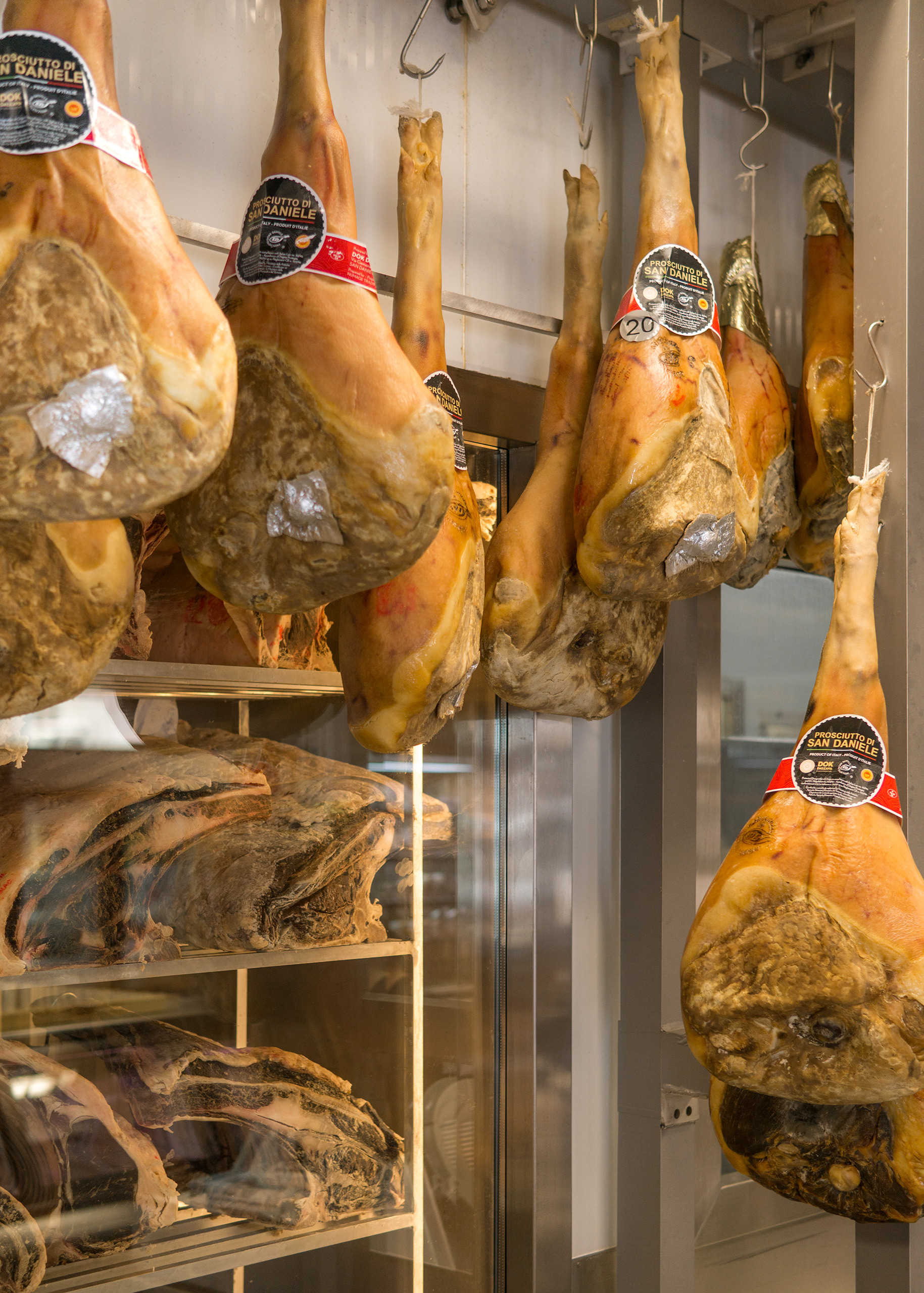 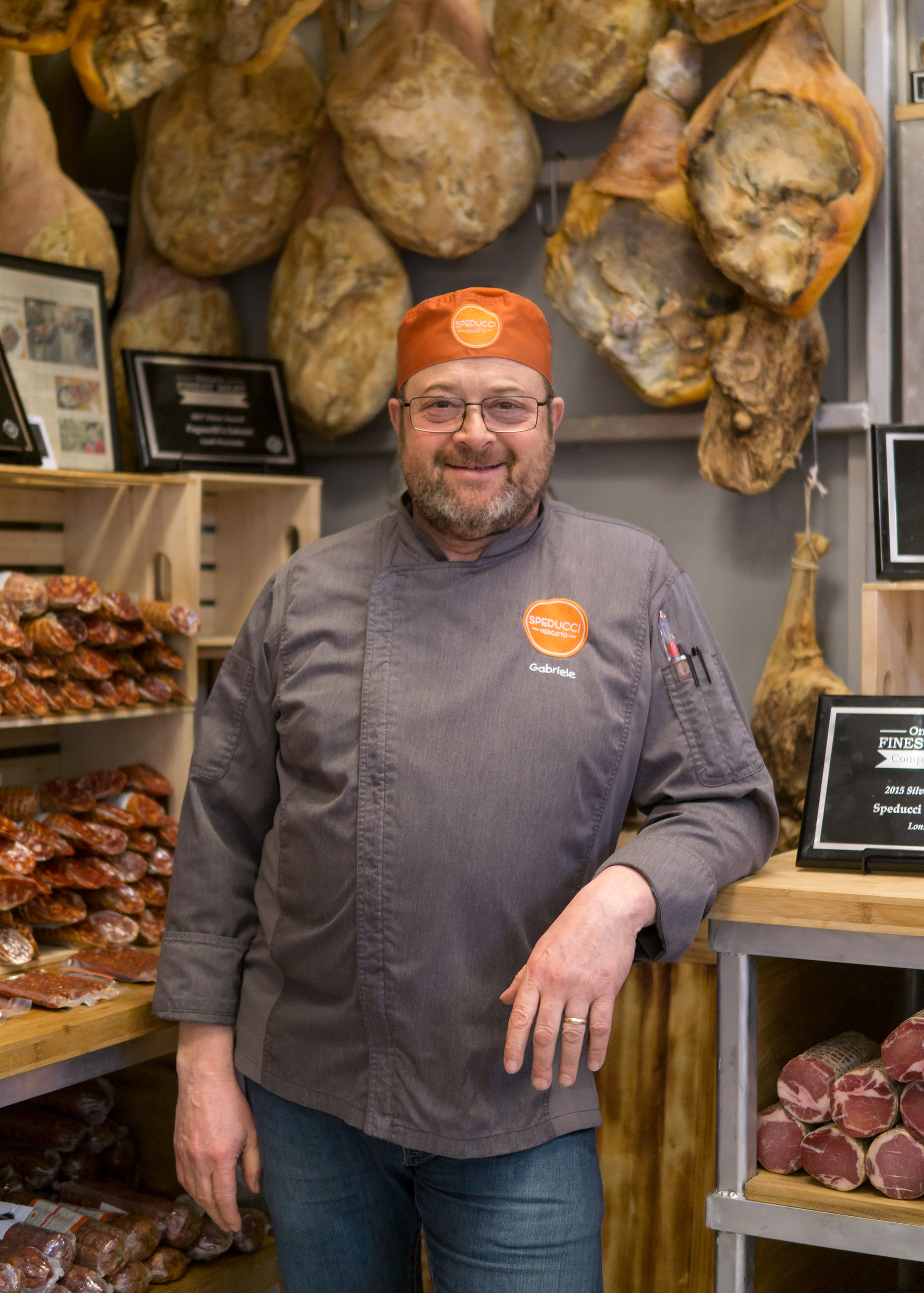 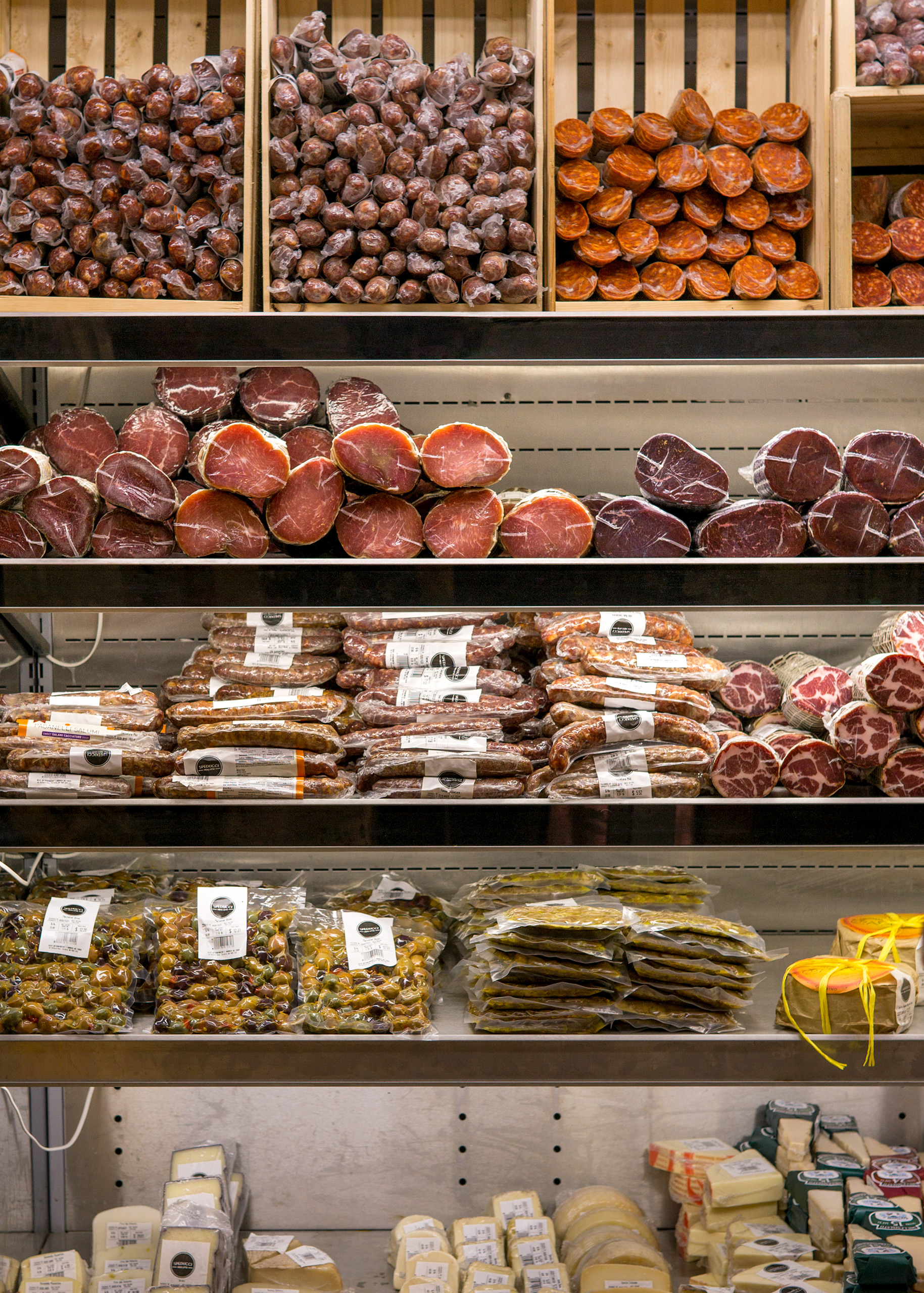 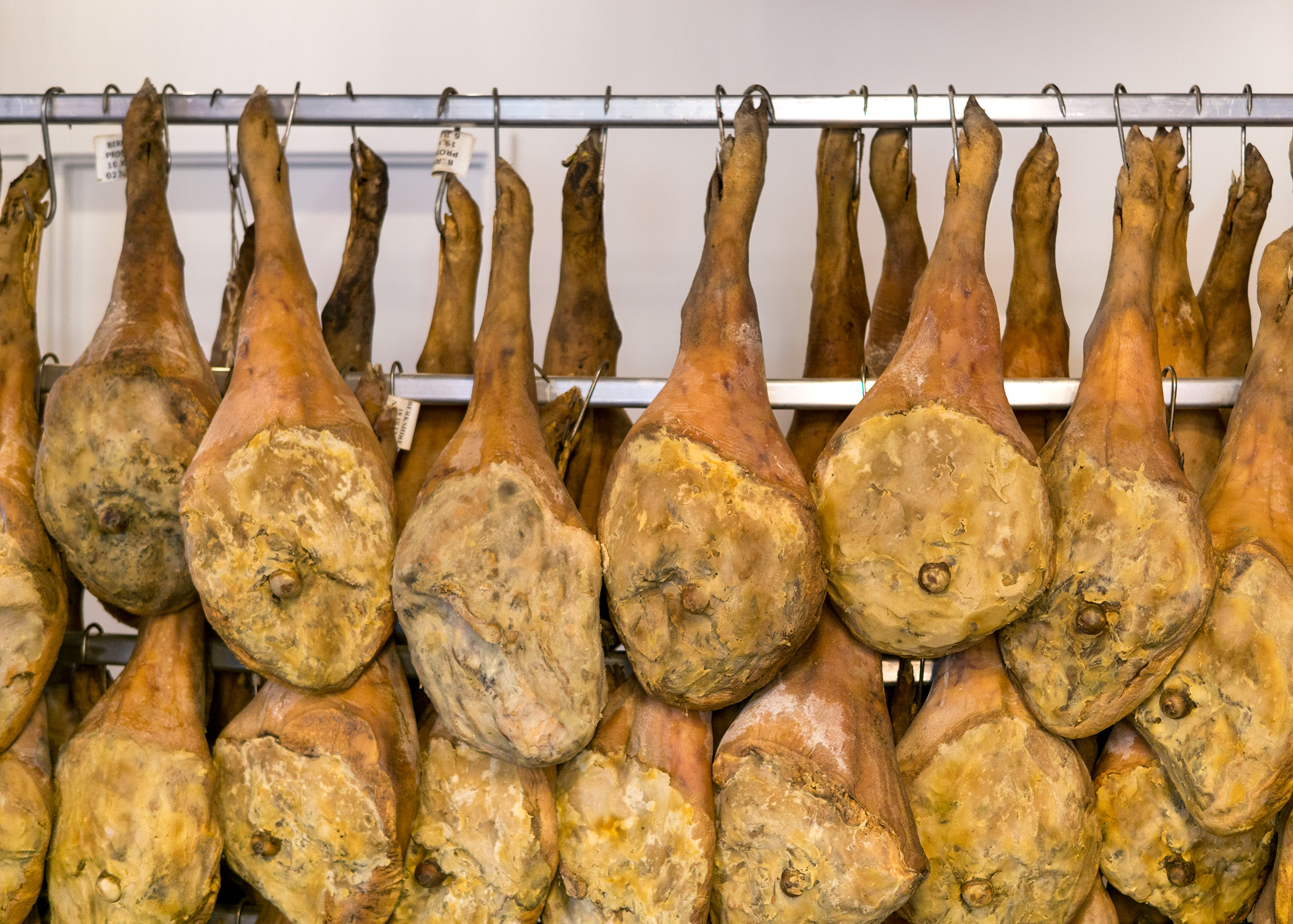 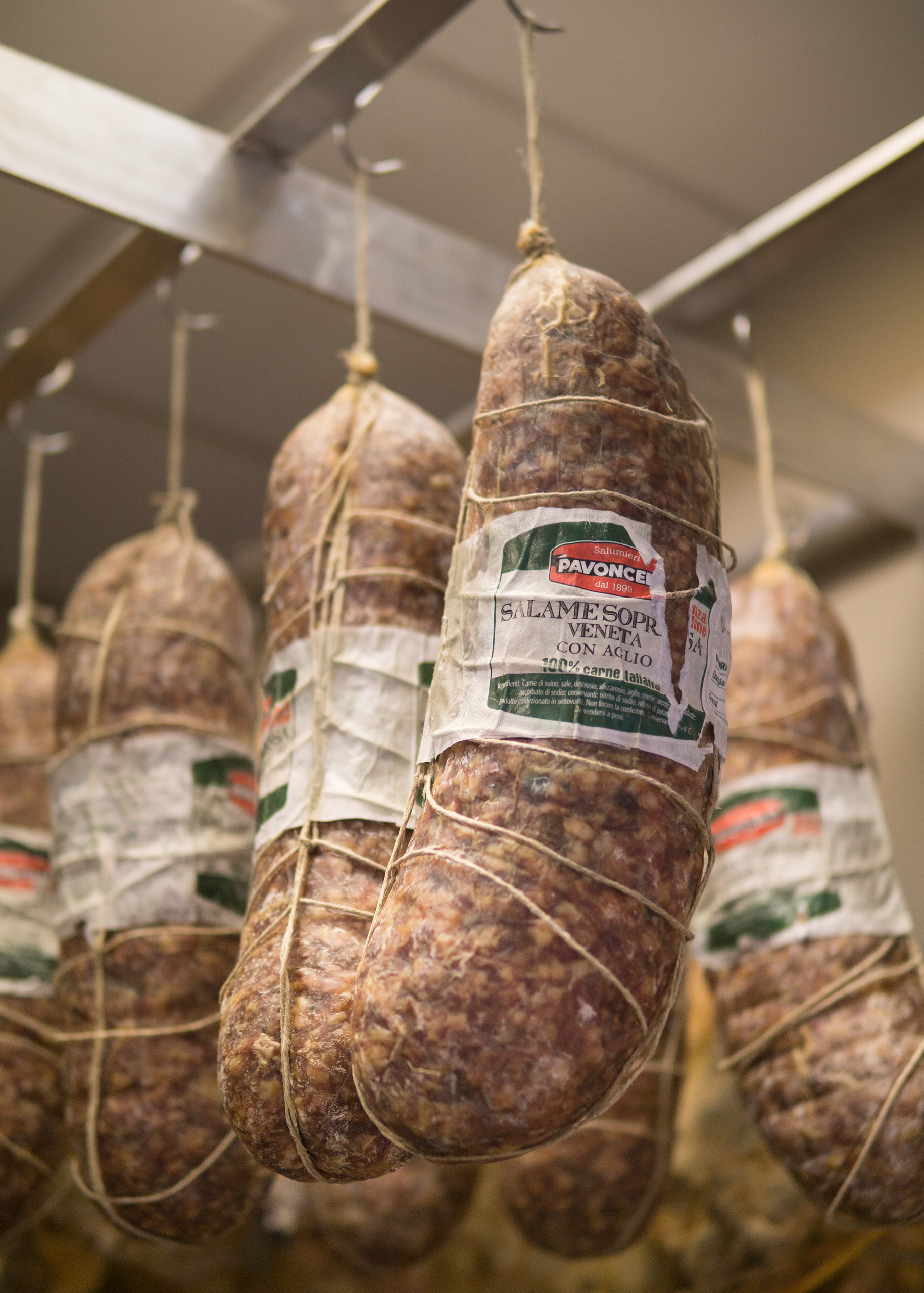 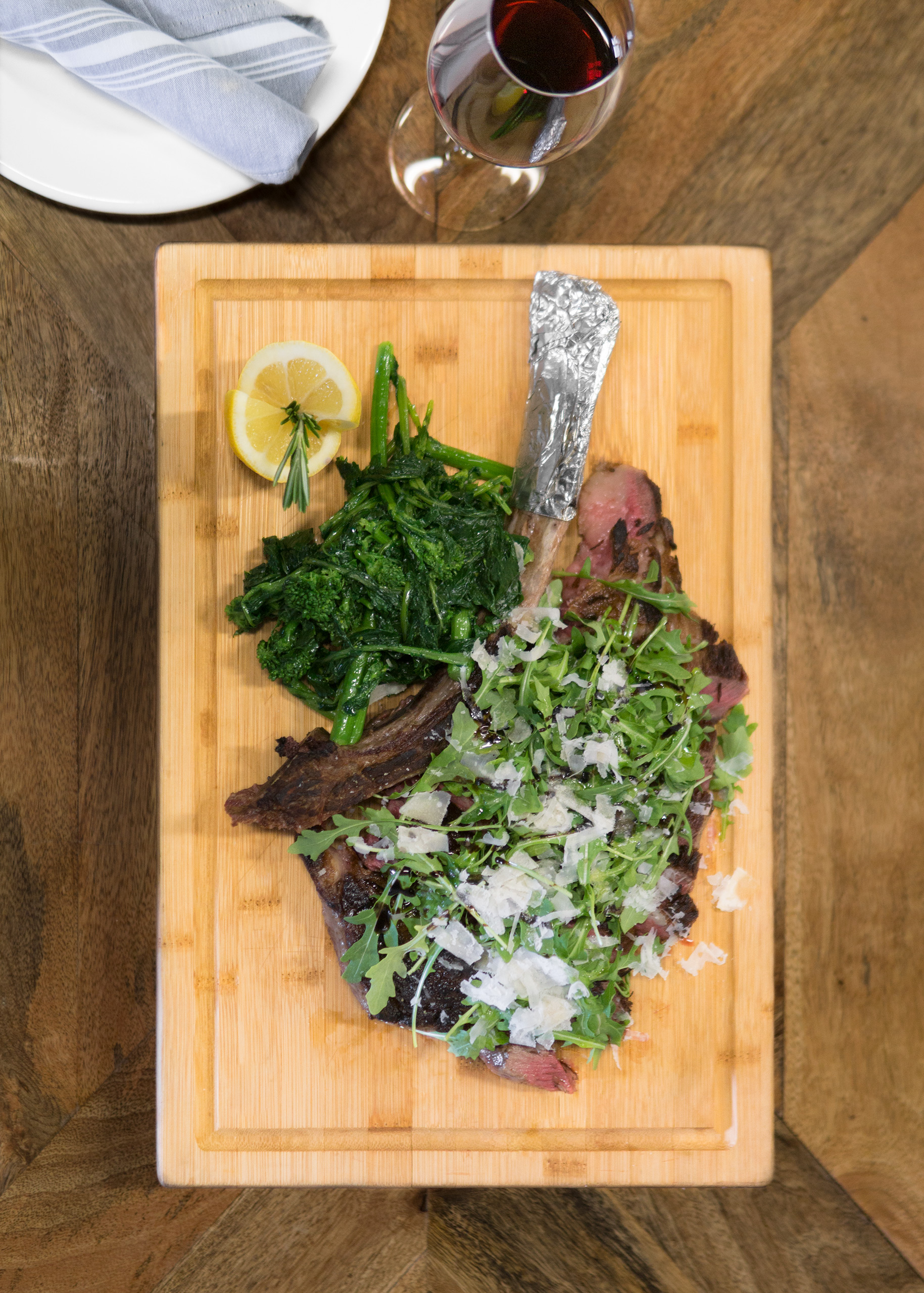 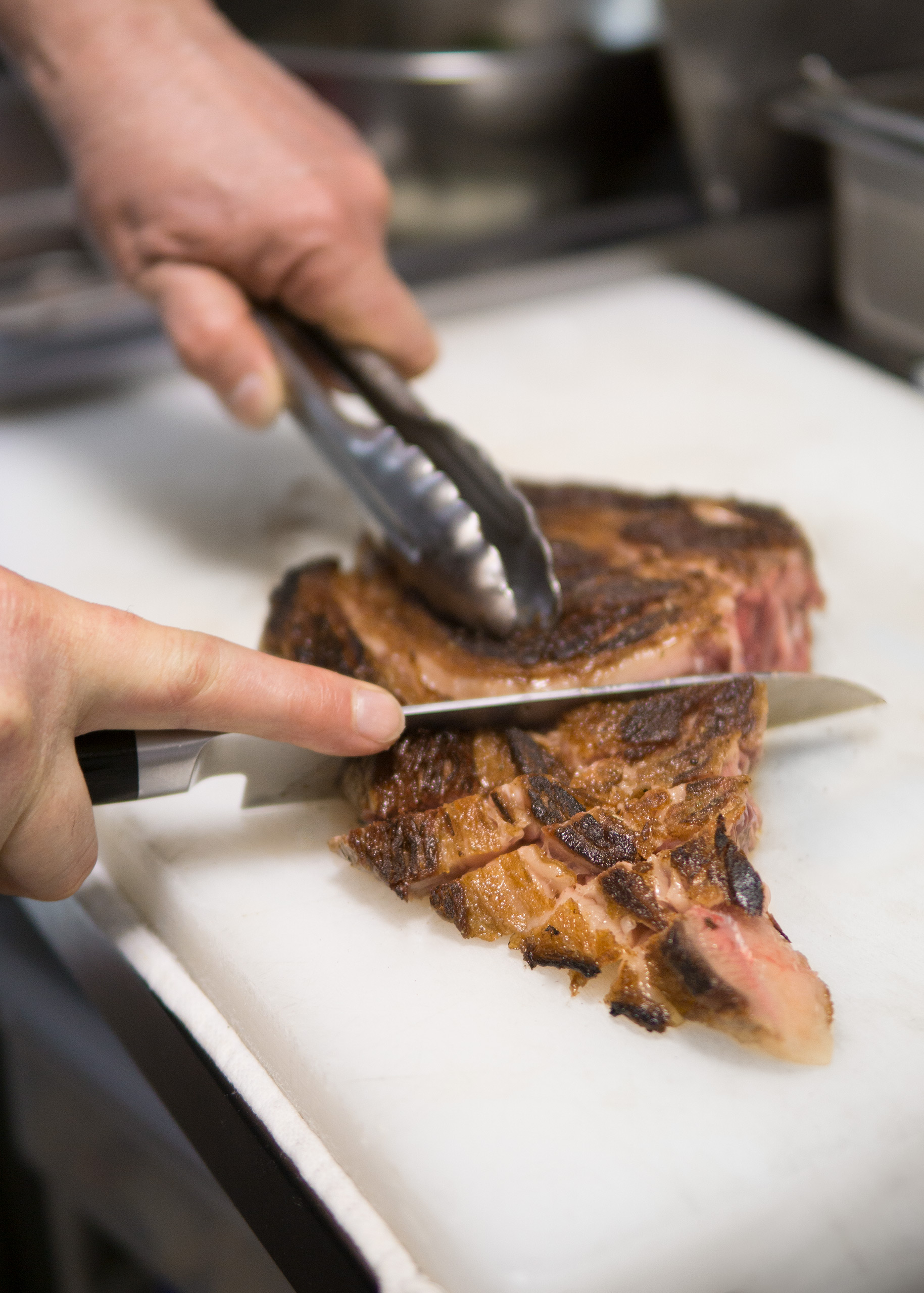 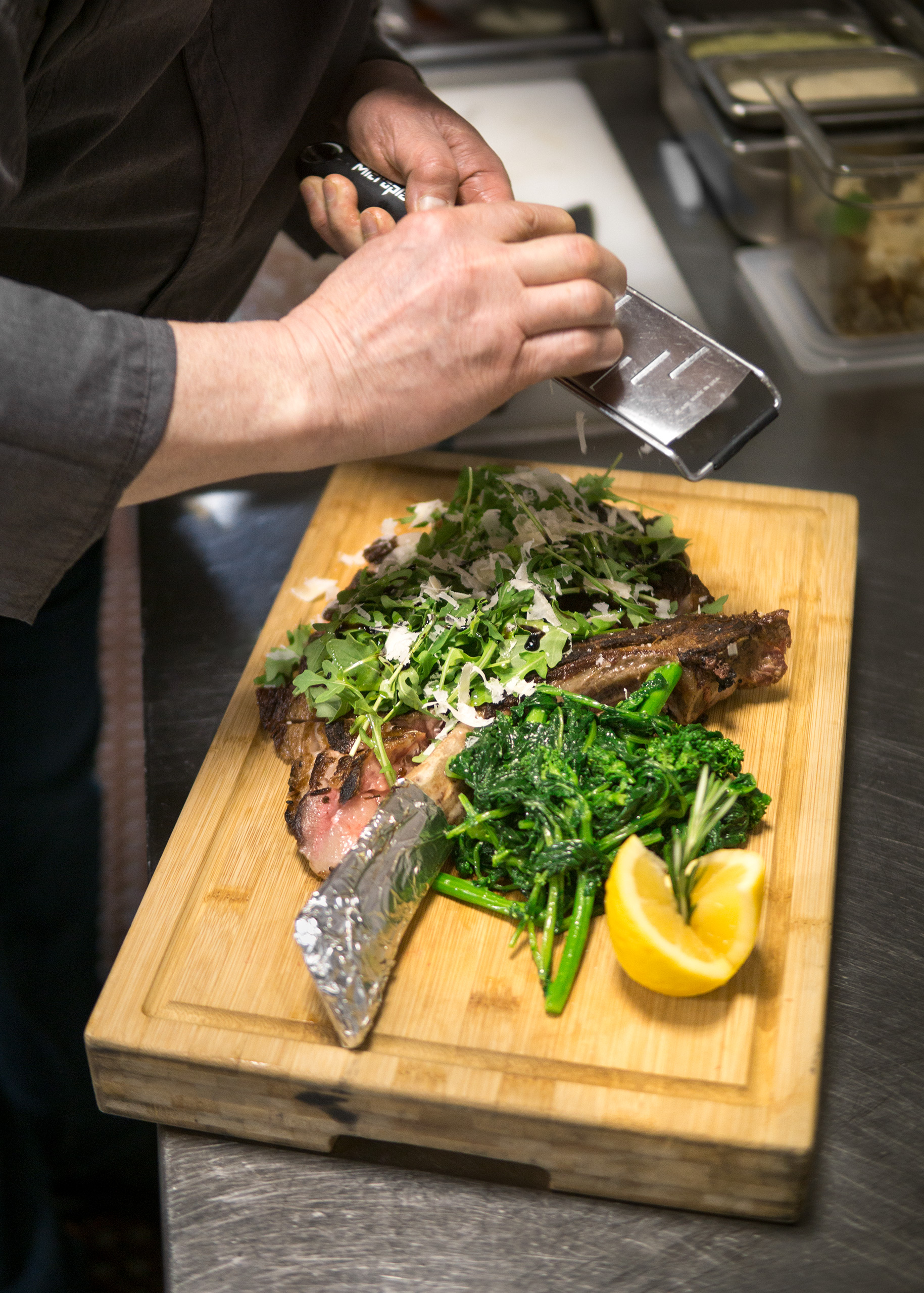