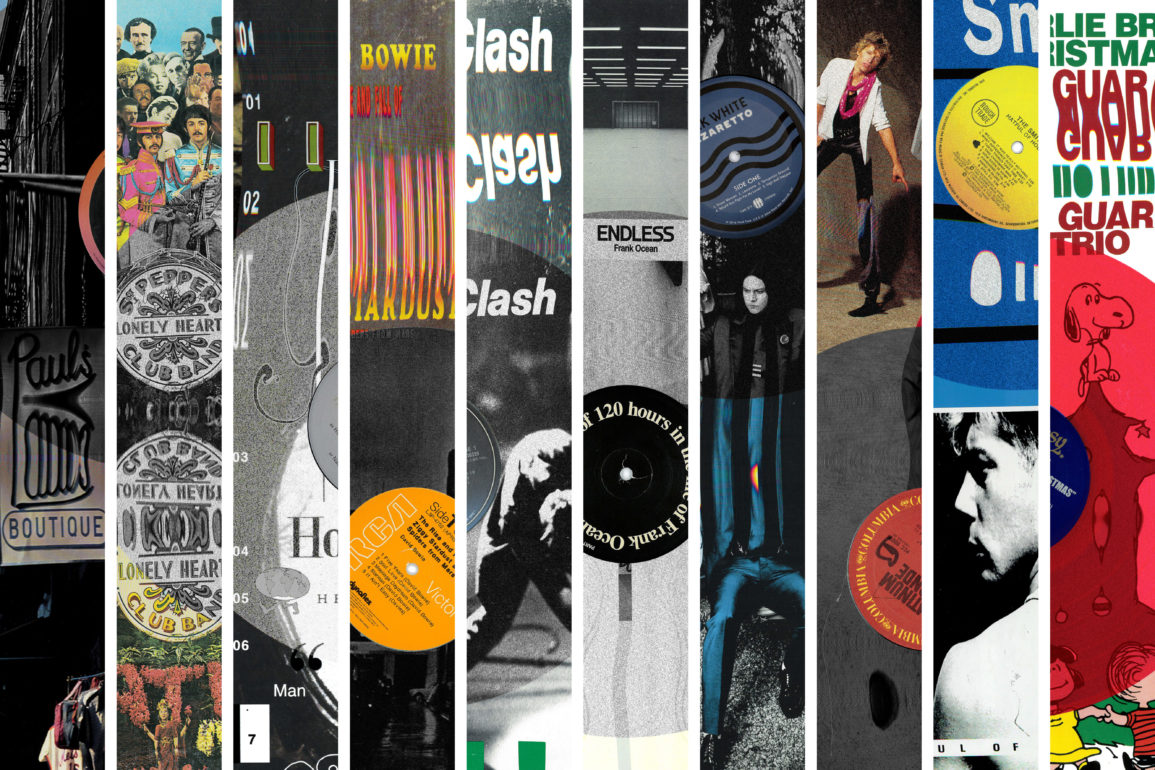 This isn’t a definitive list (what list is?)… in fact, this isn’t even a list… what we’re presenting is a peak into our record collection… a collection that (if I say so myself) has a lot of cred. And from that collection, we’ve chosen 10 albums that belong in everyone’s collection.

The criteria? We only chose from our vinyl—no CDs, no digital; We tried to not stick to one genre [although many were ignored—sorry]; and the album itself needs some sort of cool-factor—was it innovative, did it speak to a generation or was it just fun to listen to. Looking through our albums this could’ve easily been 20 or 30 albums—let’s be honest, narrowing down to only one Beatles, one Bowie and one Bon Iver album was a challenge!

You may not agree with these choices…but ultimately, we don’t care.

Some will hate on the Beatles but let’s clear the air—without them, pretty much every album here (with the exception of Charlie Brown Christmas) wouldn’t exist. Is Sgt, Pepper’s Lonely Hearts Club Band their best album? To us… sometimes… it really depends what day it is. When we made this selection, it was a toss-up between Pepper and Revolver.

Some may critique Paul’s Boutique because it flopped when it came out, but with its eclectic use of sampling, the Beastie Boys [with a lot of help from the Dust Brothers] refined the genre… it’s the Sgt. Pepper of hip hop.

Bowie… what can we [not] say about him. After four albums, he finally rose to fame with this album… When I say “he” I mean Bowie playing Ziggy, the androgynous, rock-god from space with more than a taste for sex and drugs.

Every album by The Clash is essential listening—they were smart, political and played with brutal force. They weren’t labeled “the only band that matters” for nothing.

Corny? Maybe to you… in our house, it’s a holiday classic; it’s sentimental jazzy-lounge music; it’s the first album played on November 12 to start the Festive Season; it gets regular play throughout the year; it’s A Charlie Brown Christmas and deserves a place on this list.

Again, you may not agree with these choices… music is subjective. If we had more vinyl on the shelves, our selection would be different… it’s possible that if we were choosing 10 albums tomorrow, some of the “short-list” would make the cut—Hendrix, Pink Floyd, Chet Atkins, Elvis [both of them!]. What we’re really trying to say is that these are 10 great albums—go listen and enjoy.

STANDING IN THE DARK