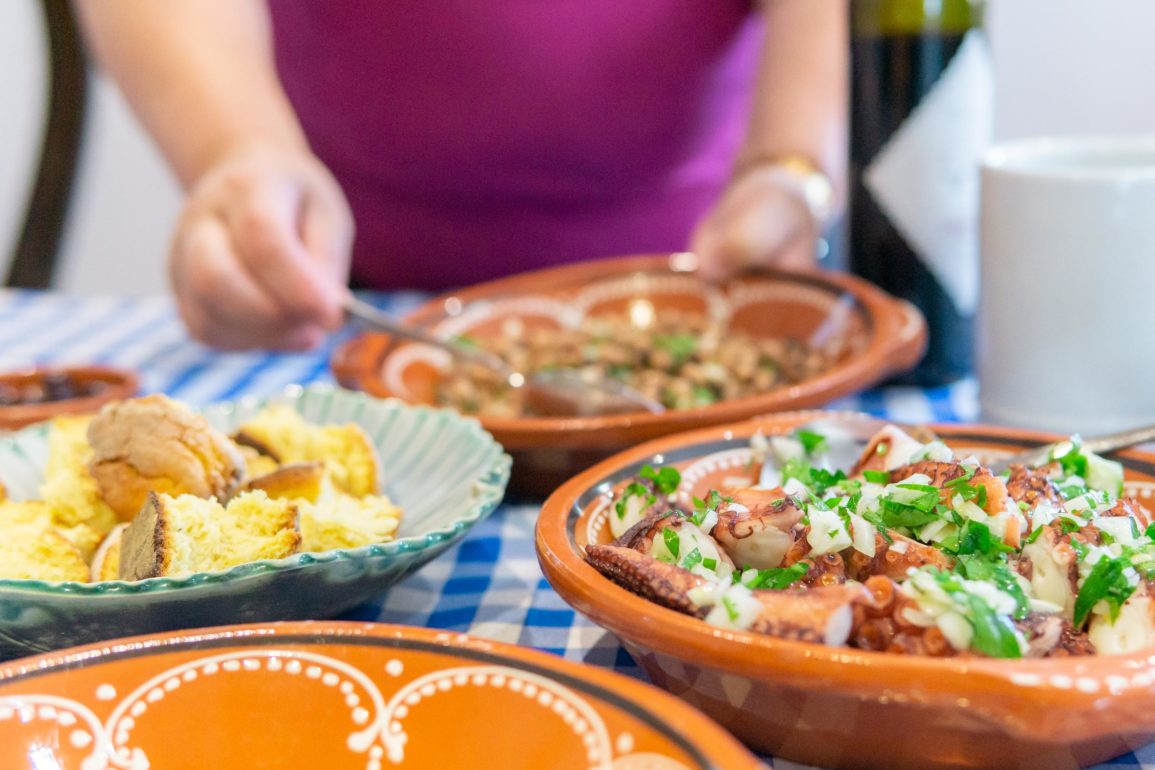 LET’S GO HAVE A SNACK WITH AVÓ LÚCIA

PETISCO [NOUN]
[PE-TEA-SH-CU]
A PORTUGUESE RELATIVE OF SPANISH TAPAS, PETISCOS ARE SMALL SNACKS MEANT TO BE SHARED WHILE HAVING A DRINK. PETISCOS CAN BE SIMPLE [OLIVES, BREAD, SALTED LUPINI
BEANS] OR SOMETHING MORE ELABORATE [GRILLED CHOURIÇO, OCTOPUS SALAD].

PETISCAR [VERB]
[PE-TEA-SH-CAR]
THE ACT OF SHARING A PETISCO WITH FRIENDS.

When my wife and I were planning our wedding, we set out to do some comparison shopping. We looked at prices, the quality of their work and the personalities of the people we spoke with—we didn’t want to hand over thousands of dollars to a person who could potentially ruin our big day. We had two caterers referred to us, so we scheduled appointments with both on the same evening. We met with the first one, an older gentleman who’d been in the business for many years. His first order of business was to badger us for not having the bride’s parents with us. We explained that since they wouldn’t be paying for the wedding, it was a moot point but he was undeterred, insisting he couldn’t speak with us if they weren’t present. When we asked for a ballpark figure, he asked what we wanted to be served. When asked what the choices were, he got more annoyed, tossed a paper menu on our table, told us he was a very busy man and left to speak to someone at another table. Isabel and I exchanged a glance—time to leave. We showed up to our second appointment early and were greeted by a smiling gentleman behind a desk. “Hi! I’m Bert.” When we asked him for some menu suggestions, we let the genie out of the bottle. Bert took us on a culinary voyage of options and recommendations for every course, passionately explaining how each dish would be prepared. I swear you could see a twinkle in his eye and he was definitely salivating. He was passionate and that was enough for us.

When I called Avó Lucia to talk recipes, she displayed the same passion for food as Bert did. “I can do rabanadas Poveiras… I have my mother’s secret recipe but I heard you wanted to do the francesinha sandwich, so I can do that if you like but I’d have to call my mother in Portugal to get her recipe for the francesinha sauce—her sauce is the best and that’s the key! How about we do an octopus salad? It’s a very typical dish in my hometown, in fact my parents used to serve it in their tasca.” I could hear the saudade in her voice. Saudade is an emotional state caused by missing someone or something or someplace and thanks to some incredible mythology, it’s possibly Portugal’s most famous word. Lusophones have been telling themselves [and anyone who will listen] that since the word isn’t translatable into any language, they are the only people on the planet able to have these feelings—a cute story but total rubbish. In Spain they say añoranza, the Germans say sehnsucht, and although we may need more than one word to say it in English, we anglophones are quite capable of feeling nostalgic longing.

If we’re going to talk untranslatable Portuguese words, I think tasca would be a better suggestion. These are small, family owned no-frills restaurants that started popping up in Portugal ash the end of the 19th century serving cheap house wines and petiscos. Portugal evolved and so did the tasca, which now serve up large portions of authentic food at honest prices. Locals in any city or town fill the seats [especially at lunch] to fill up on the day’s special which are usually hand written on the paper table cloths—if you see a fancy multi-lingual menu printed outside the door, I suggest passing that one by… it’s probably and over-priced tourist trap. Eating at tasca is like eating at a friend’s home—the menu changes daily, the owners and staff treat you like family and the food tastes homemade, like it was prepared by your avó. Okay, admittedly my theory is a small stretch, since you can find a family-owned restaurant anywhere in the world, but trust me when I say that tascas are something totally unique to Portugal.

I met Lucia for the first time when we showed up at her doorstep on the day of the photo-shoot and I immediately got that “feeling of being at an old friend’s house” vibe. [to be fair, I’ve had that feeling at every avó’s house we visited].

Lucia told us about growing up near the ocean in the city of Póvoa de Varzim. If the city name sounds familiar to you, maybe it’s because in 2021, American fashion house, Tory Burch drew attention to the fishing city when they copied the Poveira sweater then told the world it was Baja inspired—they’ve since corrected this slip-up and all parties involved are happy. Lucia’s father owned a tasca in the city and she worked there, naturally. She met and fell in love with José Marinho, her future husband, in that city. His grandparents also owned a tasca in a nearby town and he would come to the city to visit the market or to go fishing. Since Lucia was only 14 when they met, her father wouldn’t let her date, but there were workarounds. José would show up with a few sardines to use as bait and his homemade spear [a broom handle with a large spike nail curving out of one of the ends], and the two of them would take a walk to the ocean, to go octopus fishing. They eventually got married and moved to Canada, worked hard and built a family—three children, two boys and a girl, and a pair of grandchildren.

At this point in the story, I’m inserting an “ewww” warning… If you think members of the cephalopod clan are gross [squid, cuttlefish, octopus], you may want to skip to the end of the story because now it’s time to talk octopi… or octopuses… or octopodes.

I’ve been a fan of the octopus for a very long time—probably since my Sesame Street days, when I remember watching the Muppets do their rendition of a Beatles classic that was written by Ringo Starr. As the story goes, Ringo was hanging out on Peter Sellers’ yacht, off the coast of Sardinia, and was served squid—something he had never eaten before. He told everyone, “It was OK. A bit rubbery. Tastes like chicken.” He then went to chat with the boat’s captain who told him that octopus travelled along the seabed looking for shiny objects to build their gardens. This inspired the Beatle timekeeper to write a song and with a little help from his friend George, Octopus’ Garden was born.

Aside from this fun sing-song memory, I also happen to find the octopus delicious, so when Lucia suggested her recipe, it was my turn to start salivating—I can, though sympathize with the people who haven’t tried it and think the octopus is, well, ewww. Raw octopus is slippery and the suction cups can be off-putting but given a chance, it can quickly become one of your faves. Although it comes from the sea, it’s not fishy smelling or tasting, in fact they are just as flavourful as lobster with some people saying they taste like chicken [Ringo] or are similar to pork—it’s really dependent on how they are marinated or the flavours added while cooking. As a bonus, most octopus sold in stores comes pre-cleaned, so all it needs is a quick rinse and you’re ready to go… and in case you need more convincing, it is high in protein, iron, vitamin B-12, and selenium, but low in calories and fat.

As Lúcia cooked, the conversation twisted and turned and touching on a variety of topic —as two old friends often do—and she was passionate about all of them. Whether she was talking about planning her husband’s birthday party [happy belated José!], sharing memories from Portugal or food, everything seemed new and exciting. The one thing that she seemed most proud of was talking about her yearly Movember fund-raiser. Since 2016 she has organized an event that has raised close to fifty thousand dollars for the charity [If you’re interested in donating or attending her event, send us an email to [email protected] and we’ll put you in contact with the lady herself].

With the meal prepared, we moved to the dining room where, just like a tasca owner, she pulled out three traditional clay plates, cutlery, glasses and set everything down on her checker-board tablecloth, all of which were brought to Canada from Portugal—mementos of the tasca life she left behind. Her final touch was opening a bottle of wine and pouring some for me into a mug that used to belong to her husband’s grandfather, telling me it was the cup he used for wine.

As we packed up to leave, Lúcia promised to make some rabanadas Poveiras for us to enjoy at the LL studio and walked us to our car. The only thing that seems to be missing from Lucia’s life is a tasca of her own. “Maybe one day,” she smiled. “It’s my dream.” I look forward to that dream coming true.

1 MOLHO VERDE LITERALLY MEANS “GREEN SAUCE.” ALTHOUGH THERE ARE VARIOUS VERSIONS OF THIS PUNCHY HERB INFUSED SAUCE, THEY ARE ALL OLIVE OIL BASED WITH ONION AND/OR GARLIC AND LOADS OF PARSLEY OR CILANTRO DEPENDING ON YOUR TASTE BUDS. 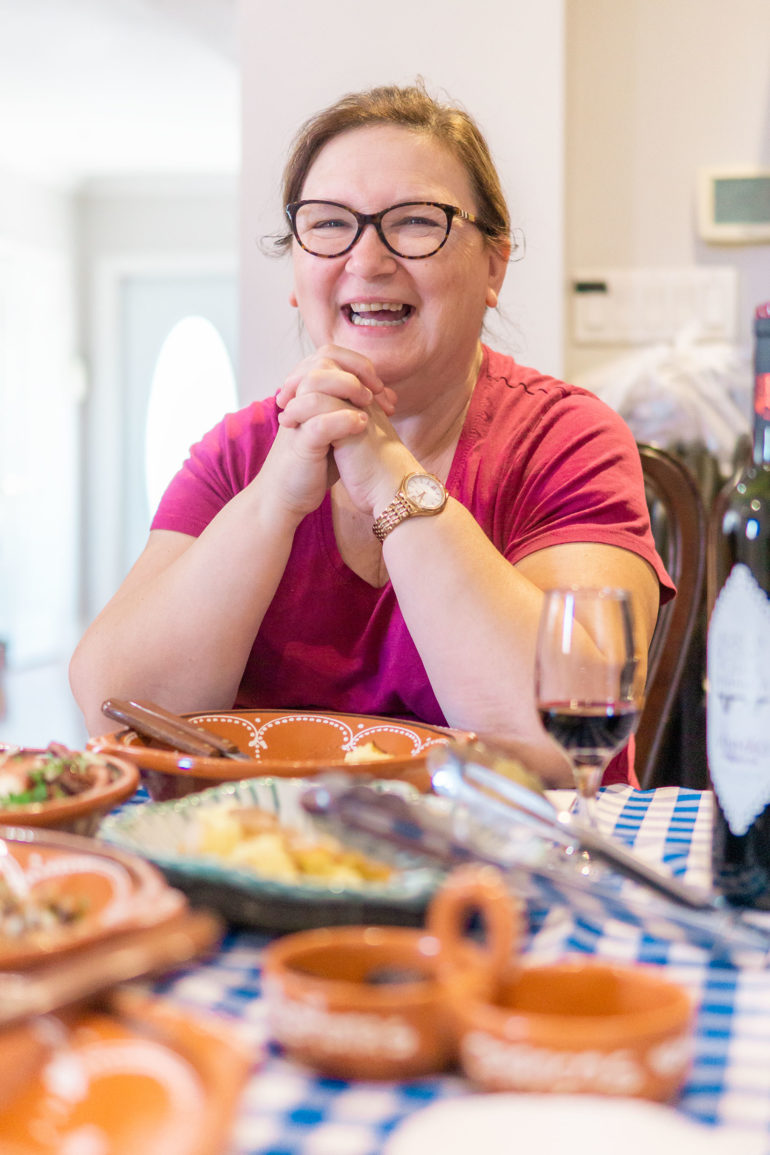 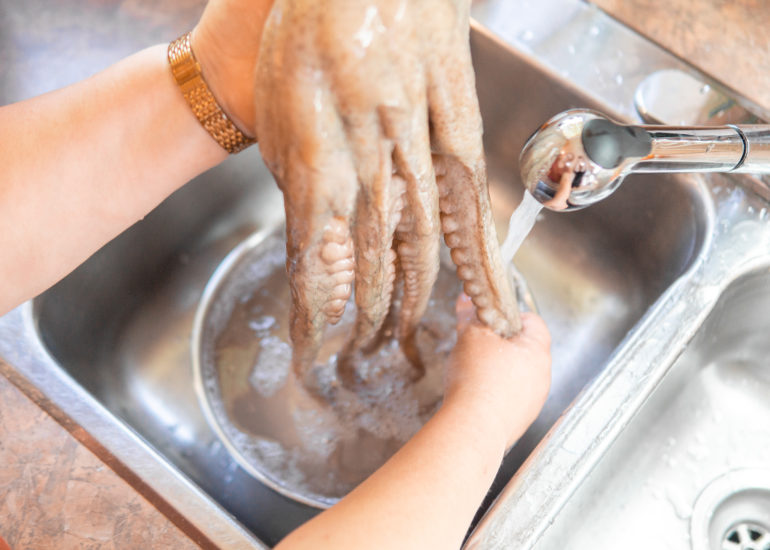 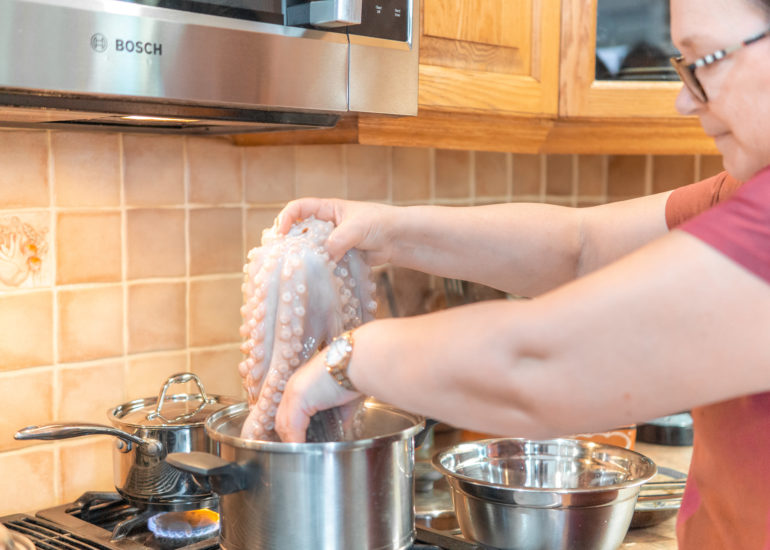 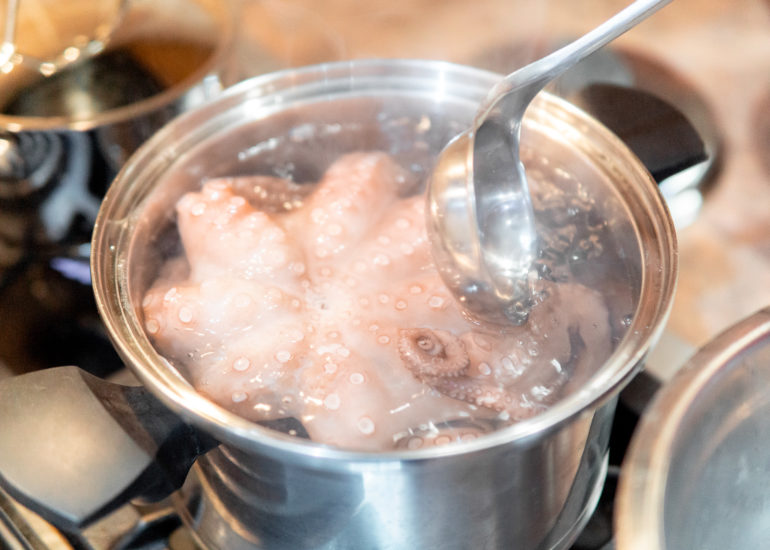 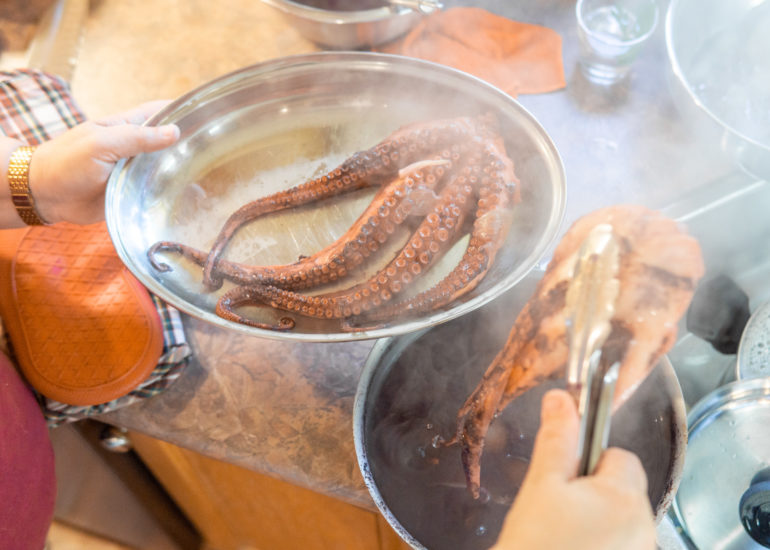 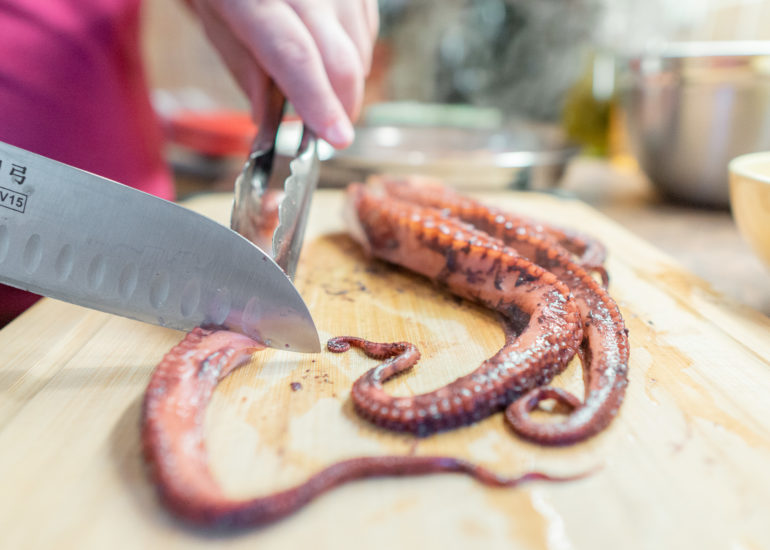 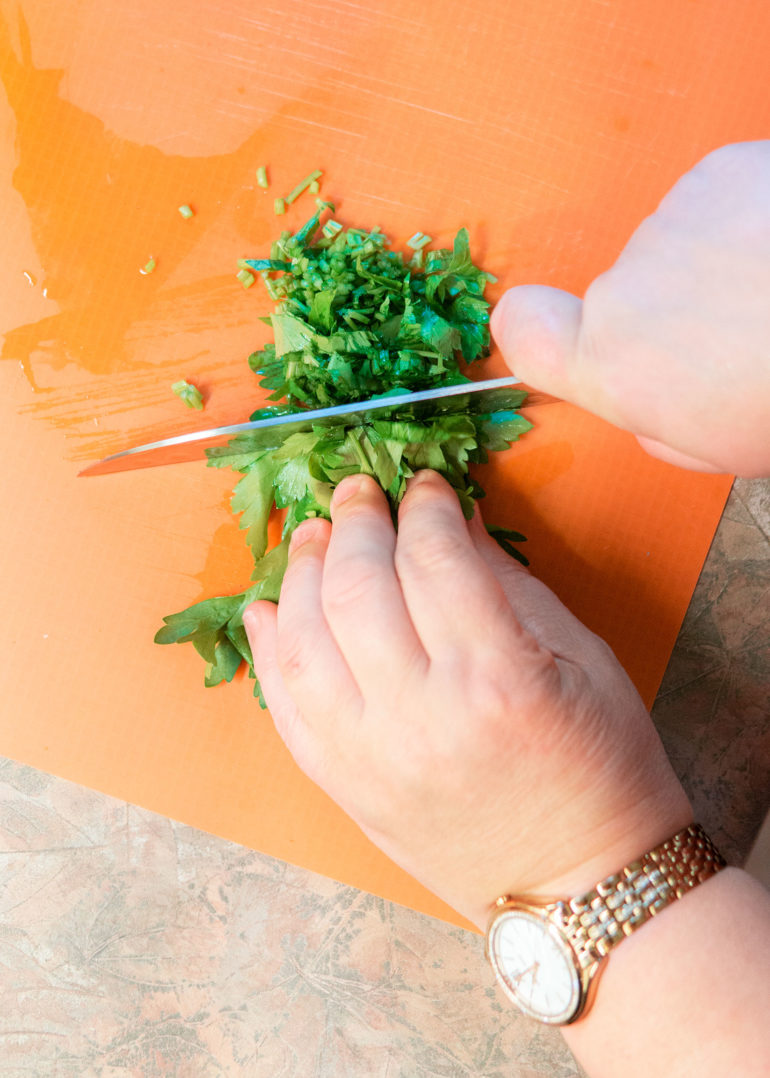 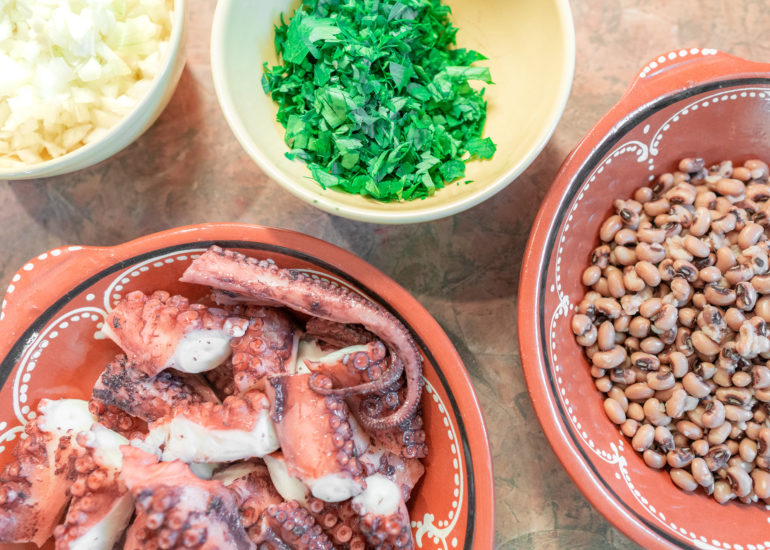 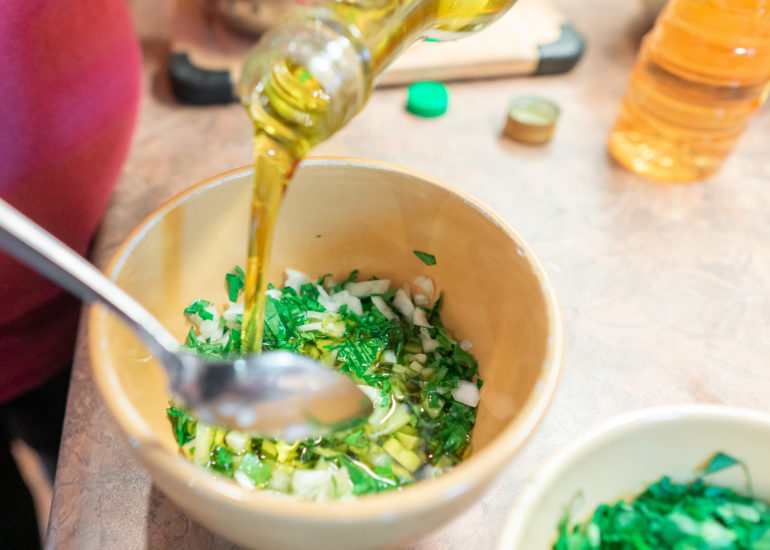 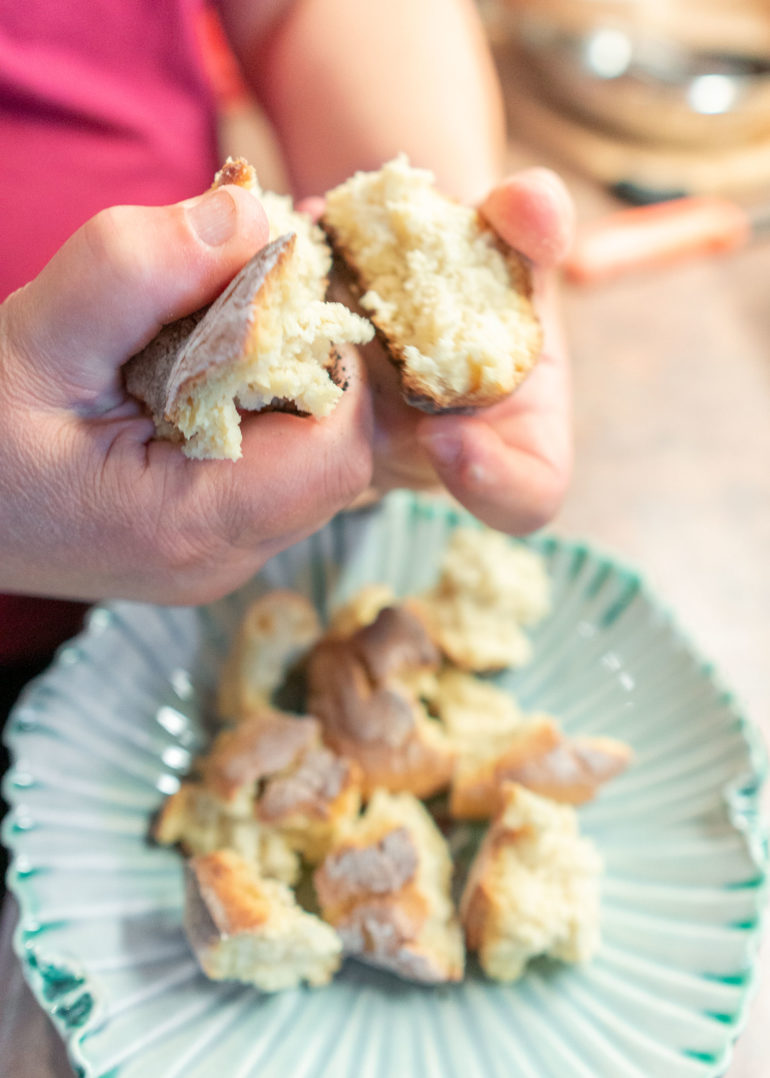 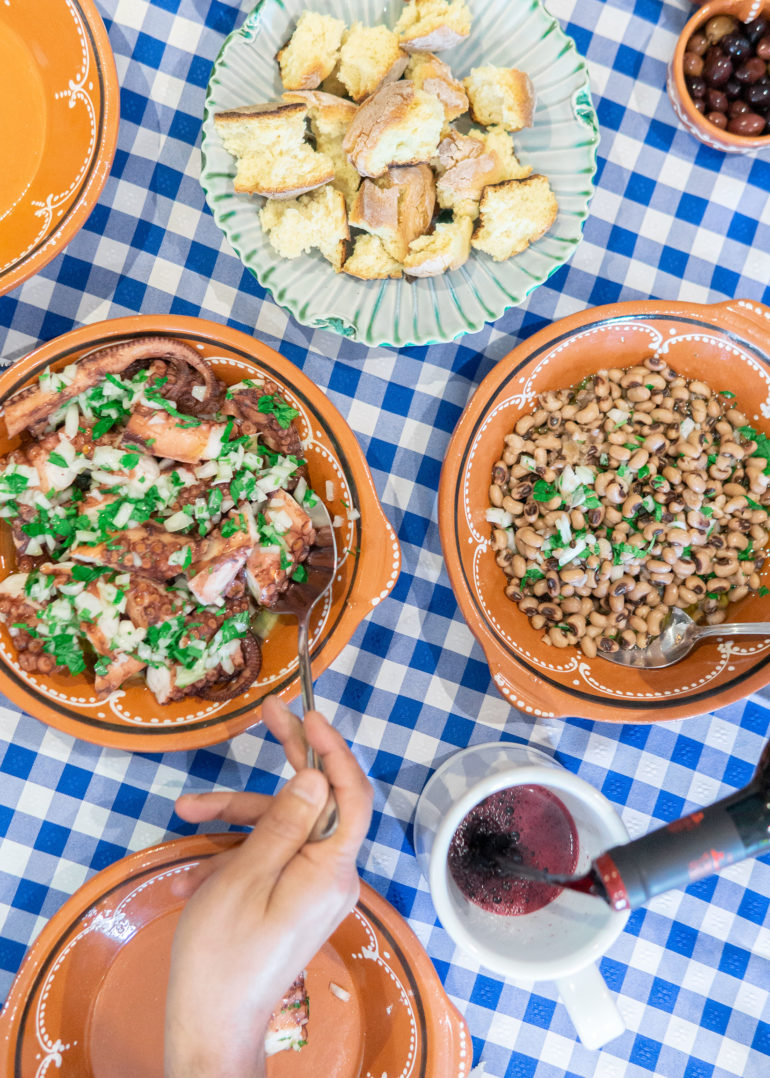