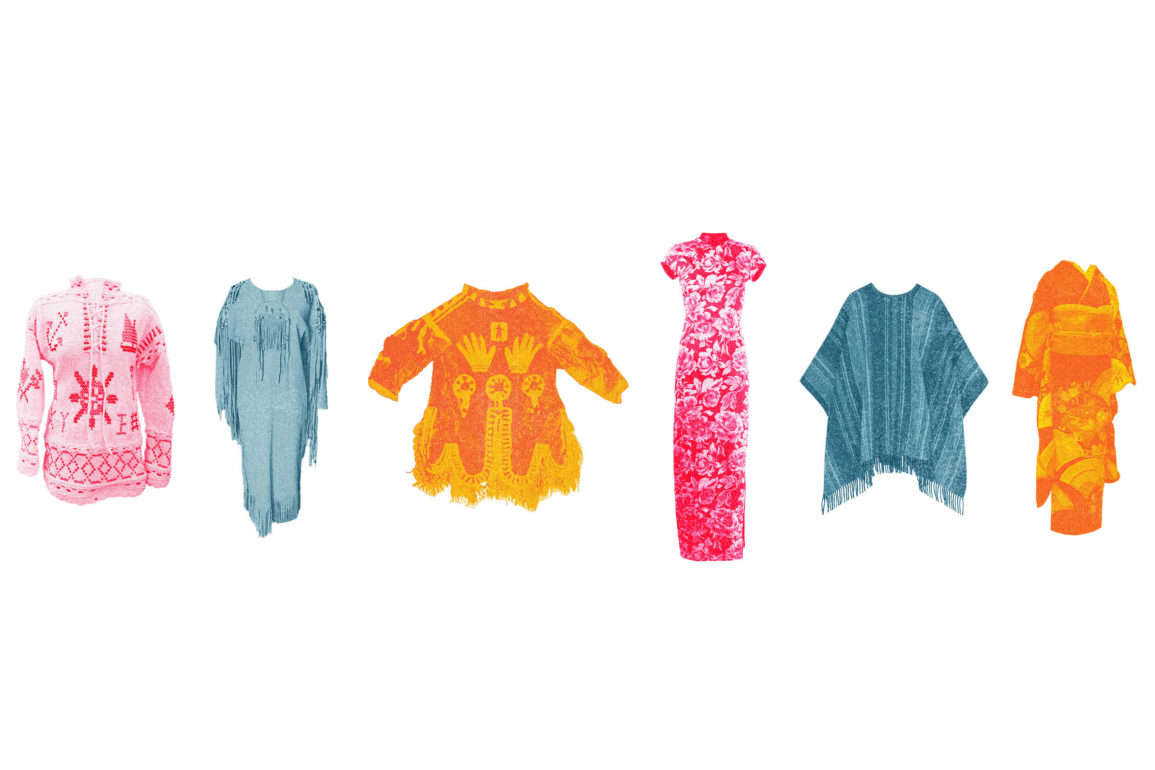 How far is too far?

There’s a fine line between cultural appropriation and cultural appreciation. Most of us – me included – navigate between one and the other without much awareness. Cultural appropriation refers to the use of objects of a non-dominant culture in a way that doesn’t respect their original meaning, give credit to their source, reinforces stereotypes, or contributes to oppression. It’s all about the power dynamics, and this can be tricky to understand.

Between the ages of 6 to 9 years old, every summer, I braided my hair. I remember being excited as if that was a certification to being a cool kid, spending long days at the beach, making sure I was more tanned than the year before. When I was in middle school, I recall people using kimonos and hoop earrings. Which I didn’t, not because I thought that I shouldn’t, but just because I couldn’t pull them off.

I never thought much about where all those elements came from. They just existed. Is anything even being invented these days? Should your skin colour or the place you were randomly born dictate what you can use, say or do? Personally, borrowing from other cultures seems inevitable in today’s world, and it can be potentially positive, as it can offer more exposure and knowledge about a certain culture. It would be shocking if we were born in a culture, and that would be all we had access to. That’s why we should work towards cultural appreciation, which is the respectful borrowing of elements from another culture with an interest in sharing ideas and diversifying oneself. Can you always distinguish between cultural appropriation and appreciation? Not really, as it’s mostly based on your intention.

This is not a modern issue, but now it’s definitely more discussed. Is this a tangible problem or just the result of an ultra-sensitive society? Today, the internet – mainly social media – is the anonymous denouncer, the investigative police, the judge, and it delivers the sentence simultaneously, without much room for discussion, leaving exposed what before would be easily swept under the rug. Many celebrities have seen their reputation tarnished after being accused of cultural appropriation. While some seem harmless and even unreasonable, other situations make me think that there’s a reason why this is an issue.

The groups targeted for cultural appropriation are usually of African descent, Asians, Latinos and Native Americans. This can be expressed in something as simple as a hairstyle, music, tattoos, art, the usage of religious elements, the way we speak or in fashion.

Gwen Stefani has faced criticism for her fixation on Harajuku culture from Japan. The same happened to Katy Perry as she performed on American Music Awards in 2013, dressed as a geisha – with a full kimono, tabi socks, lacquered hair, and powdered face. When in 2017, Selena Gomez wore a Hindu bindi to MTV Movie Video Awards, she suffered some backlash considering the bindi is an ancient tradition in Hinduism and has religious significance. The question is: how far can you go? Most of the negative reactions are due to the lack of knowledge and the use of elements of great significance for their own profit. Iggy Azalea and Miley Cyrus have been accused of exploiting African American culture for profit but ignoring community issues. Someone even questioned, “What would America be like if we loved black people as much as we love black culture?” – and that gets you thinking.

When you think about Rock n’ Roll who’s the first artist that comes to your mind? Maybe Elvis Presley since he’s known by being the King of Rock n’ Roll. The music style was born in the ’50s and borrowed from black musicians, like Little Richard, who never received credit. Even though Elvis Presley never claimed credit for it, the media has rewritten history. Music executives chose to promote white performers with a mainstream look and sound. This strengthens the idea that cultural appropriation involves an impact on a non-dominant group. This practice of borrowing from black artists and promoting white artists instead continues to this day.

When I see celebrities being scrutinized for using cornrows, dreadlocks or any hairstyle inspired in a certain culture, I always felt that to be exaggerated. I don’t think that anyone means to be disrespectful. How can we know for sure where the cornrows come from and why should they be limited to a segment of the population? However, now I understand that the problem is how things are perceived. Suppose a black woman wears cornrows or dreadlocks. In that case, they may be looked in a different way, especially in a professional environment, but if Kylie Jenner does it – or any white woman – it’s edgy. While a black woman needs to fight for acceptance, a white woman can be admired for using the same hairstyle.

In 2016, Marc Jacobs presented a runway show at New York Fashion Week in which a group of all-white models wore dreadlocks. What left most people outraged is not so much about hairstyles but the lack of black women on the runway. Cultural appropriation becomes a fundamental problem when we are trying to eliminate oppression instead of perpetuating it. When brands get inspired by another culture but don’t include people from that culture, it passes the message that what they wear or do is acceptable but not their colour/aspect. Whether it is in music, fashion or entertainment, the biggest problem of cultural appropriation is wanting to celebrate other cultures without their presence. It would be as if someone throws you a surprise birthday party but doesn’t invite you. It just doesn’t make sense.

In Australia, there were cases of white Australian businesses copying Aboriginal artwork to use in souvenirs or sell as if they were authentic, which led to a movement to authenticate Aboriginal products. This practice reinforced the power imbalance between these two groups, one stealing from the other intending to generate profit for themselves.

Another very polemic discussion is led in sports. The NFL team – Washington Redskins – have been constantly criticized for not changing their team’s name. When confronted by Native American activists asking for the “Indian” mascots to be removed, their spokesperson tried to defend the name’s choice by saying they are ‘honouring Indians’ or that ‘people are being too sensitive.’ The insistence is because the term ‘redskin’ was used in colonial times when the government would pay to kill Native Americans, and people used their scalp or genitalia, aka redskins, as proof of the killing. The trauma that comes from that period of violence, slavery and colonization lasts for generations. For us, it can be just a simple word and not mean much, but it can mean something much deeper for that culture. Many cases of cultural appropriation or us not understanding it can be explained by our ignorance on the subject.

One of the core objections to avoiding cultural appropriation is based on free speech. Sure, you have the right to express yourself however you want to, and there’s nothing anyone can do to stop you—even if they wanted to. However, to be more respectful, there are some rules we can try to follow. Don’t adopt sacred artefacts as accessories. Give credit, just like you would in any creative collaboration. Engage with cultures on more than the aesthetic level. Pay tribute and acknowledge their origin. Don’t dress up as an ethnic stereotype – someone else’s culture doesn’t need to be a costume or a joke. Simply, Educate yourself.

In March of this year, the designer Tory Burch was in the news all over Portugal – and some other parts of the world – for copying a traditional Portuguese artisanal shirt from Póvoa de Varzim. The worst part? On her website, they claimed the inspiration came from Mexico. If you are going to copy something, please give credit to the right person, especially since the shirt featured the same marine elements as the original and the crown of the Portuguese monarchy in the middle. What is even more outrageous is that it was sold for ten times the original one’s cost. Paying 695 euros for something that they simply stole? Of course, they apologized and tried to bring some kind of benefit to Póvoa de Varzim – a little too late in my opinion; just the usual marketing stunt. But the story doesn’t stop there; it seems that the same brand also had china similar to Bordallo Pinheiro – for me, it looks pretty much the same. No need to say that I’m less than impressed with Tory Burch’s brand “originality”.

However, not all integrations between a dominant culture and a minority need to have a negative impact. It can generate an interesting dialogue and even be the saviour of a cultural product that has faded away. In 2016, Oskar Metsavaht visited the Ashaninka tribe to get inspired. Based on what he saw, he brought new patterns and designs for the new collection. In return, the tribe received royalties for the sold pieces, and it was an opportunity to create awareness to the audience regarding the importance of protecting their territory against climate change and illegal deforestation.

The reality is that everything seems to have been already invented, and, whether if we realize it or not, we are moulded by our surroundings, which include encounters with other cultures. There’s nothing wrong in experiencing a new music style, different art, new patterns, and designs, providing that we don’t forget where they come from. Let’s just take credit for the things we actually do. As for the rest, let’s appreciate it as best as we can.