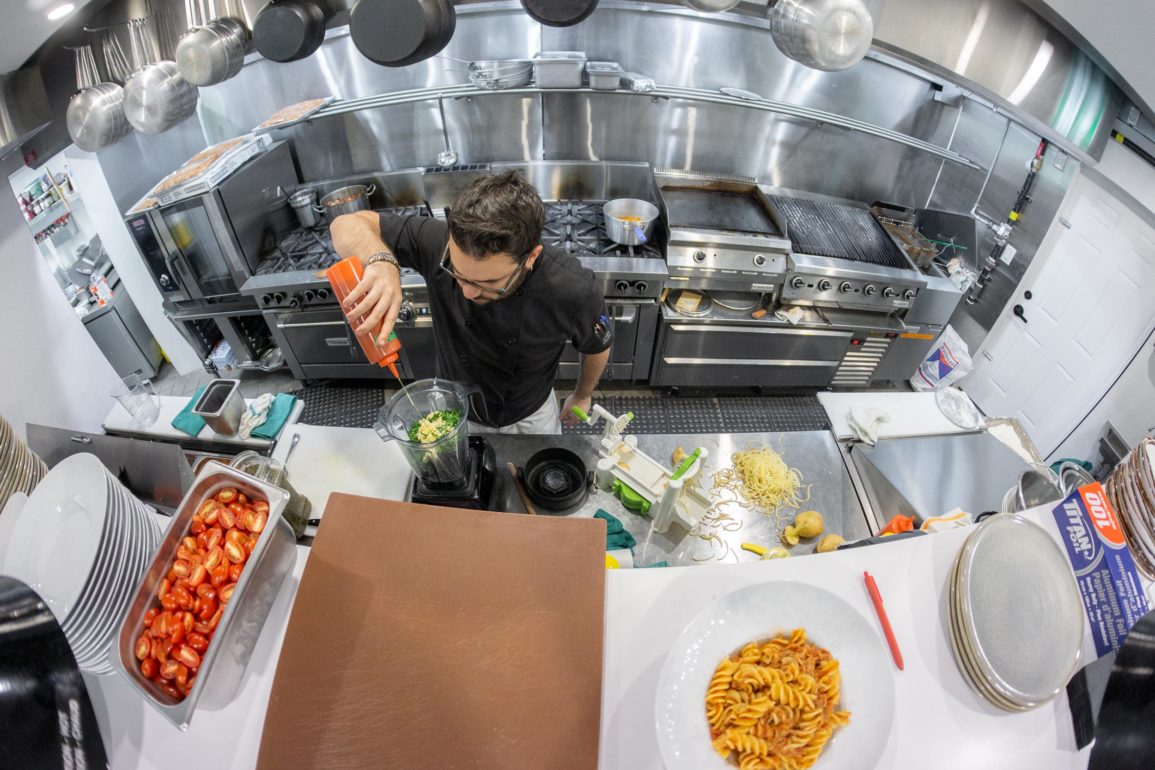 Typically, when we choose a restaurant to write about, we choose a place we’ve eaten at. Places we’re familiar with. Places we’re proud to share. Sometimes, though, things don’t go as planned. At the last minute, the restaurant we had scheduled to shoot asked to reschedule, but since we were on a tight deadline, we were forced to find a substitute, quickly. You would think that having someone come into your restaurant to shoot some photos would be greeted with a joyous cheer of gratitude, but not so much. As it turns out, the restaurant business is a bit… chaotic, so a last minute request to allow a photographer to roam your kitchen while you’re trying to serve your guests can be a bit… annoying. We were ready to give up and submit Issue 013 without a restaurant when I received an extremely vague message from a colleague, “Got one. Call me. La Baracca. Donaldo. Kleinburg.” What? Our chat was brief, “Spoke with Donaldo, he’s the manager and a sweetheart of a man, I think you’ll really like him. La Baracca opened last week. Call him to schedule something. Let me know how it goes.” What? Normally, I’d be on google reading their menu and trying to talk with people who’ve eaten there—no time. I immediately called Donaldo and left a message.

After 10 hours passed without an answer, it was time for the Hail Mary—one last text. At 9:06 pm, a reply, “I’ll get back to you shortly.” Yes… finally a positive response. He called and we had a brief chat—he was on board, but needed to speak with the chef and would let me know… shortly.” At 1:37 am I got the answer I wanted, “Sorry for the late reply. Chef is good to go. See you tomorrow at 3pm.”

I went into this totally blind, but ready for whatever culinary adventure was lying ahead. Knowing baracca is Italian for shack, I could only assume I’d be served Italian street food from a window which I would enjoy at a picnic table… maybe they’d be making porcetta sandwiches or panzerotti or spiedini… mmm. As we got closer something hit me—I’ve been to Kleinburg and am positive there are no baraccas littering the downtown. I was right—turns out the name La Baracca is a friendly nod to the shack that was there before the renovations.

Although the restaurant was closed for two hours, to give the staff some time to catch their breath and then prepare for the dinner rush, there was a couple still sitting on the patio, enjoying a few more sips of wine before leaving to enjoy the sunny afternoon.

We went in and were greeted by the man himself, Donaldo, sharply dressed and sporting a stylish black cane. “This just came in,” he said, smiling. “I have an appointment, but I’ll be back. Let me introduce you to the chef.”

In the kitchen, more smiles as they extended their hands to greet us. “This is Eduardo Beccati and Fabio Errico, they’ll be cooking for you. Make yourself at home…”

We flipped through some old issues of LL to show them what we were looking to do and they politely excused themselves to go figure out what recipe to make. As they conversed in Italian, two men walked in. “Donaldo! You’re here now? Someone told me you were here, but I had to come make sure.” It turns out Donlaldo is a bit of a celeb in the Toronto restaurant scene… and he comes by it honestly. “My father went to culinary school in Italy and arrived in Canada in 1967, with a diploma, something that was almost unheard of back then. He immediately got a job Constellation Hotel as a Maître d’, even though he couldn’t speak english—they would send him to school to learn the language. The funny part is, he served Pierre Trudeau in his room that night, just before he was elected Prime Minister of Canada. Almost 50 years later, in 2016, I served his son, Justin Trudeau, at Buca Yorkville.” He explained how, a car accident left him dead on the operating room table, and how doctors told him to switch professions—since he was good at math, maybe accounting would be a less physically challenging option. But Donaldo would have none of that and after five years of rehab and a new hip, he hobbled back to work, running a slew of restaurants from Harbour 60 to Zafferano. On New Years day, 2022, Donald’s hip gave out during a celebratory dance and he again ended up in the hospital [hence the cane]. “Again, the doctors are telling me, I’ll never work again.. so I said, ‘sure, whatever.’” During his recovery, the phone rang. It was his old friend Luigi Beccati, asking him to come manage his new restaurant in Kleinburg. “He told me his brother would be working there but he couldn’t do it alone. Eduardo would be running the kitchen but he needed someone to make sure this place was set up, and running well… someone he could trust. I said, ‘Sure.’” Donaldo [half] jumped back into it. “That was 45 days ago. I worked for 45 days straight to… sorry, my life… 44 days. One night, I was driving our dishwasher home and a car travelling twice the speed limit ran into us, and destroyed my car. The dishwasher was okay, but the next day, I couldn’t move, so it’s the only day I took off… I always say, my life is ups and downs.” I imagine calling in sick would be a problem with this guy.

We did as we were told and enjoyed our meal—no arm-twisting necessary. It was time to hear Eduardo’s story. “I came to Canada in 1989, and I’ve always worked in restaurants. In Italy, I had some other jobs—I worked with carpenters, brick layers, I drove bulldozers in the caves—but they didn’t last very long because I always went back to restaurants… and I’ve always worked. I have no idea what an unemployment cheque looks like,” he proudly announced. Eduardo and his brother Luigi both came to Canada and started working. “We worked at a restaurant and would take the bus, morning and night, one hour each way. I remember sitting on the bus saying, ‘Wouldn’t it be funny if we opened a restaurant across the street from where we work?’ And that’s exactly what happened. We opened our first place across the street… then our old ex-employer bought the building and became our landlord!” That was Sapori Trattoria. Eventually there were more restaurants Sapori II, then a pizza/pasta place named Trio which Eduardo sold four years ago. “I had a good business going, but after that, I said, no more restaurants.”

“No more restaurants? So how did you end up here?”

“You get sucked back in. My brother needed help… we do all our restaurants together. Also, it’s hard to find staff… but we have some good people, like this guy here,” happily gesturing towards Fabio. “He’s new! He arrived in Canada mid-May. He has no idea what you’re saying!” That explained why he didn’t speak much. “We work well together. Actually, the recipes we gave you are his.”

“He wants to know where he can buy the magazine.”

“Let him know I’ll be back with some magazines… and I’ll be sure to bring my appetite . Ci vediamo piu tarde.”

1SOUS VIDE REFERS TO THE PROCESS OF VACUUM-SEALING FOOD IN A BAG, THEN COOKING IT TO A VERY PRECISE TEMPERATURE IN A WATER BATH. IF YOU DON’T HAVE A SOUS VIDE MACHINE, THERE ARE SLOW COOKER HACKS AVAILABLE ONLINE. 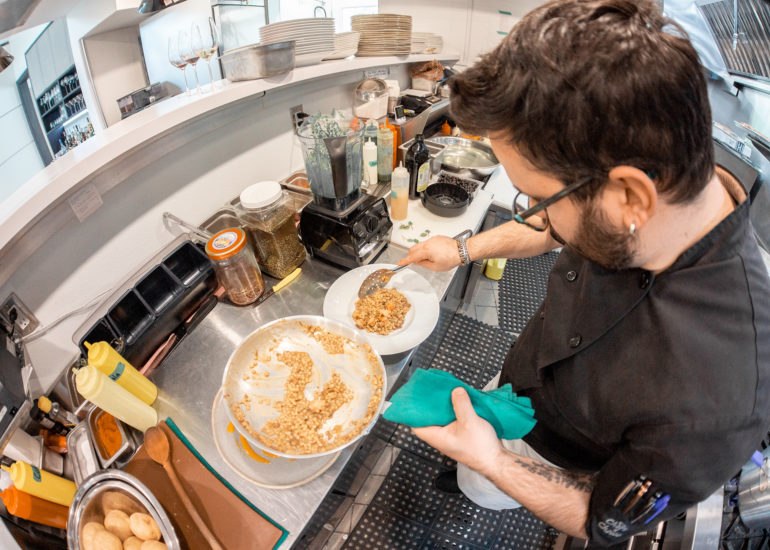 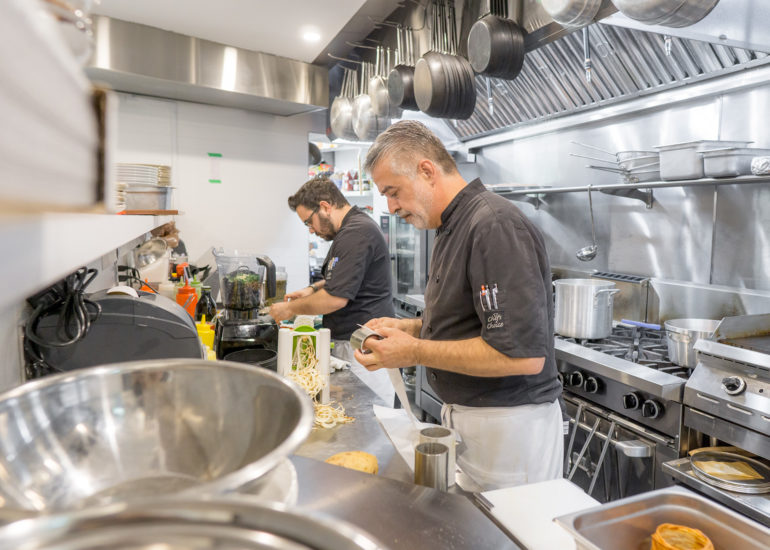 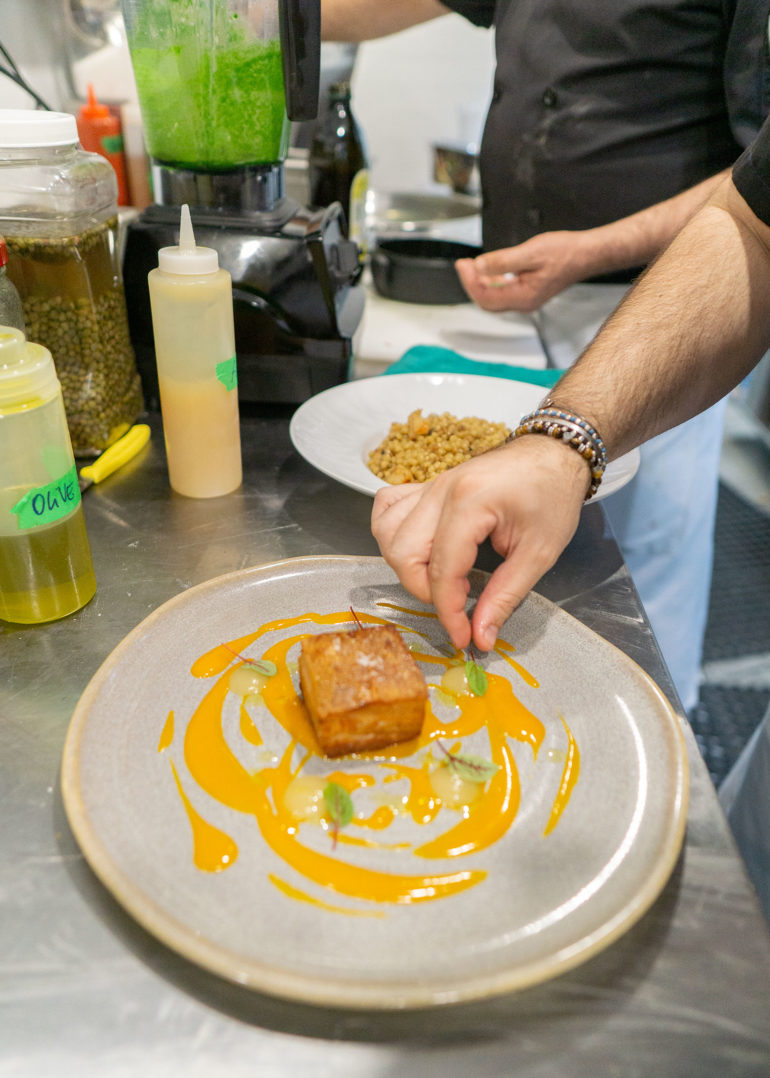 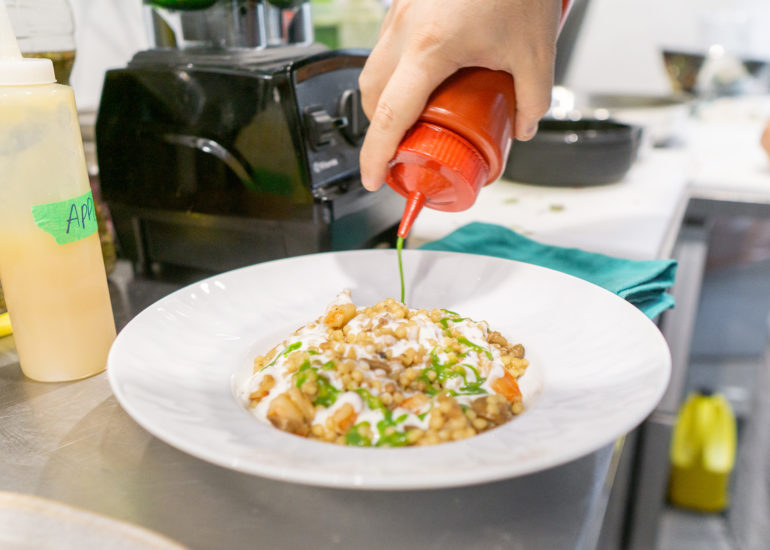 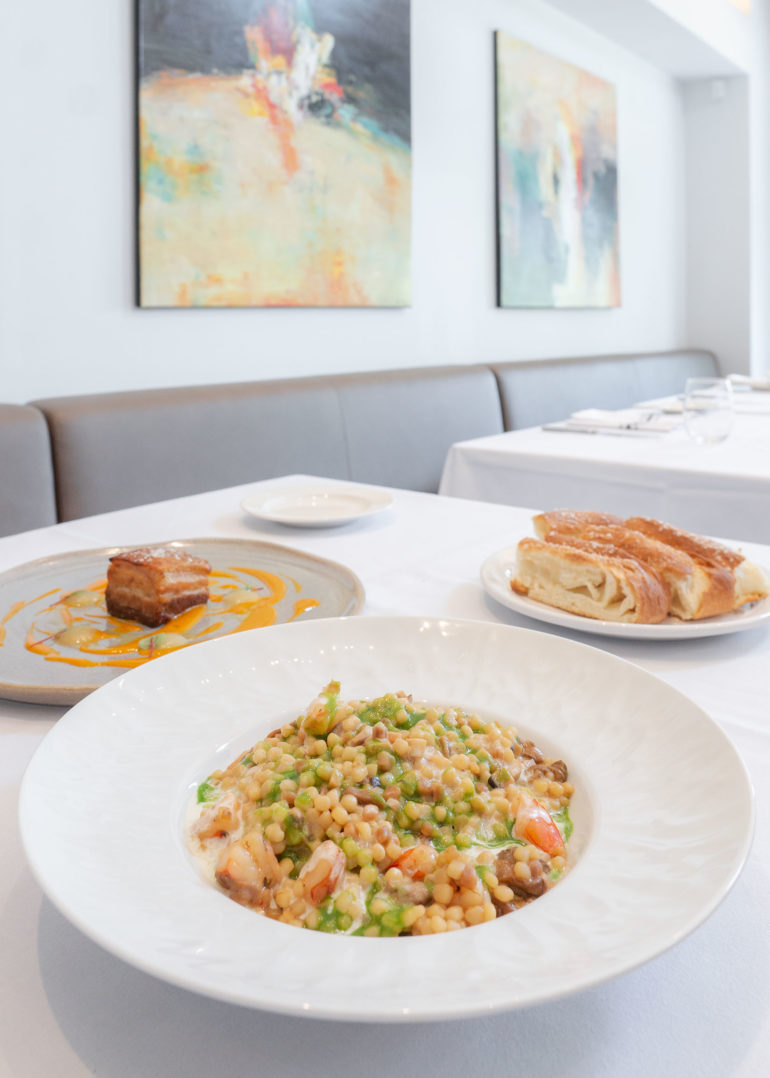 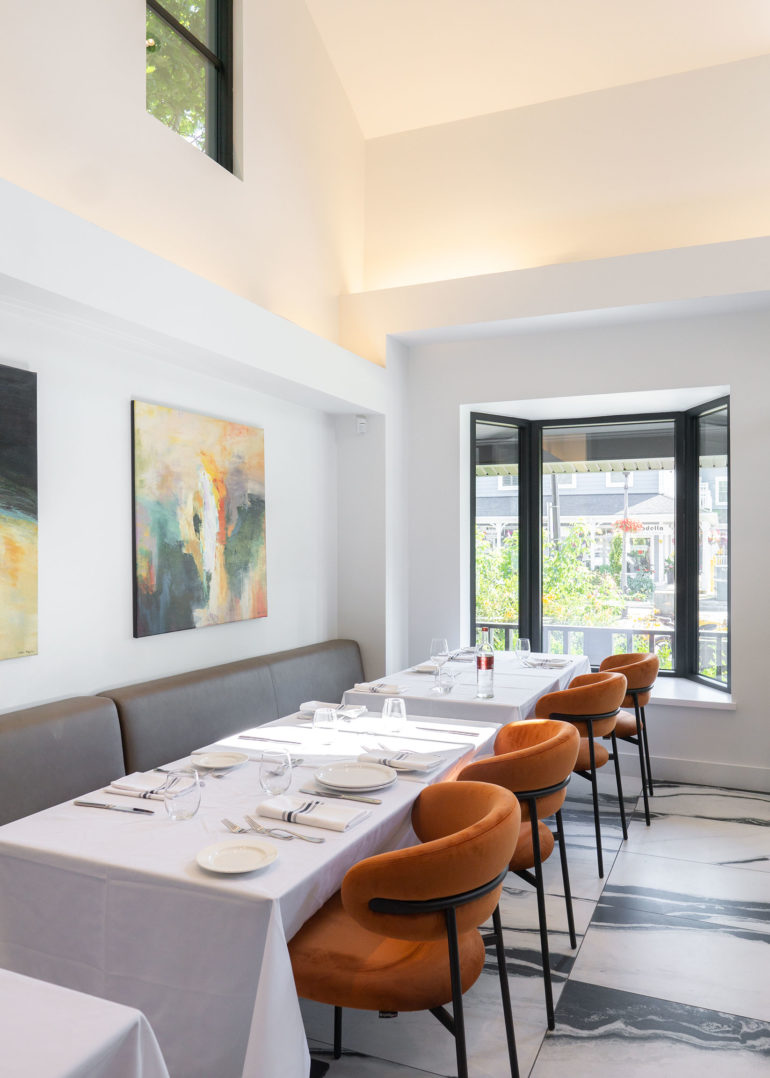 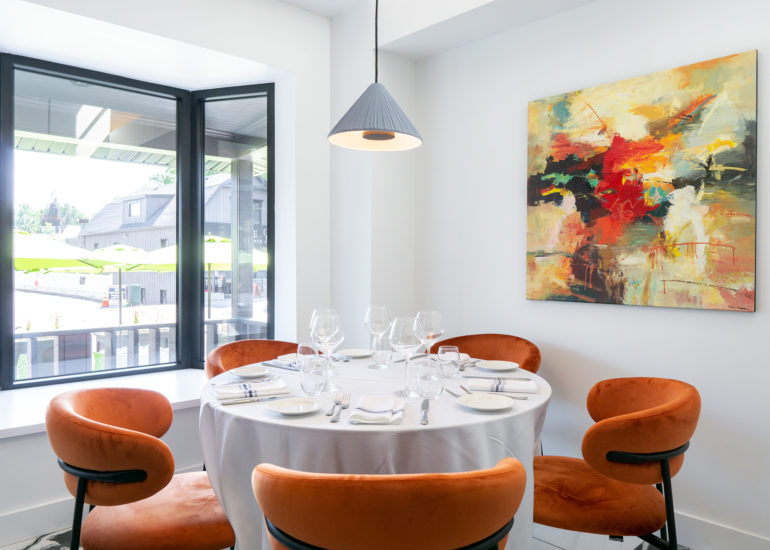 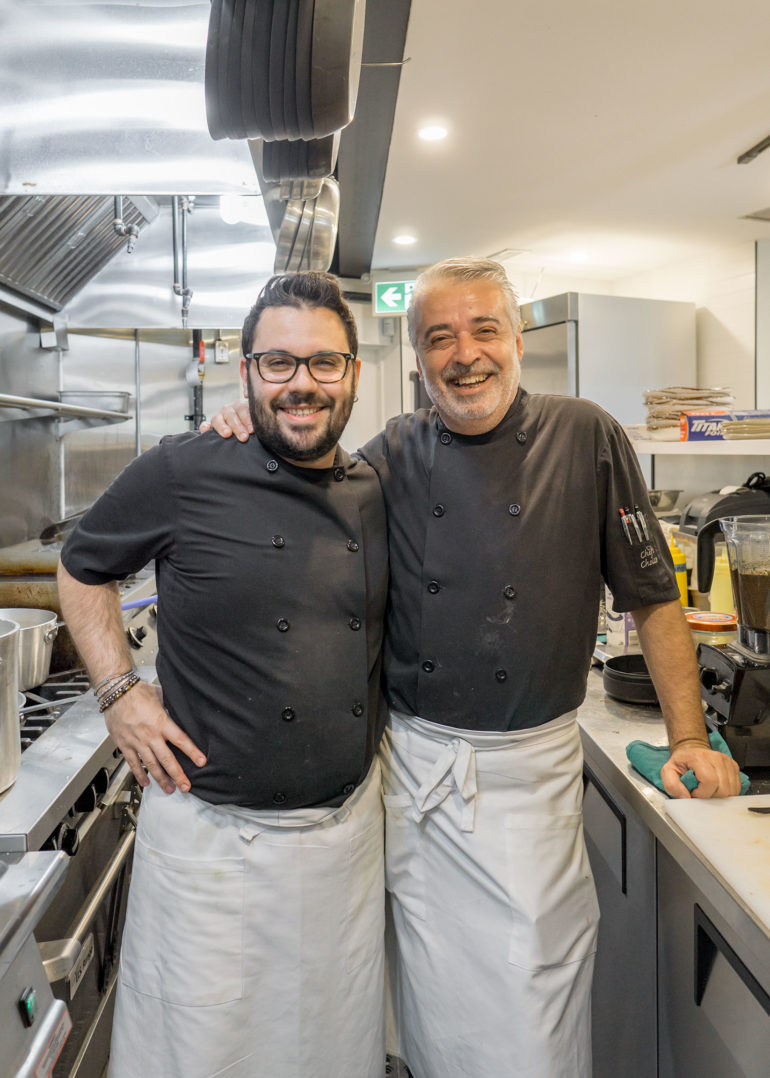 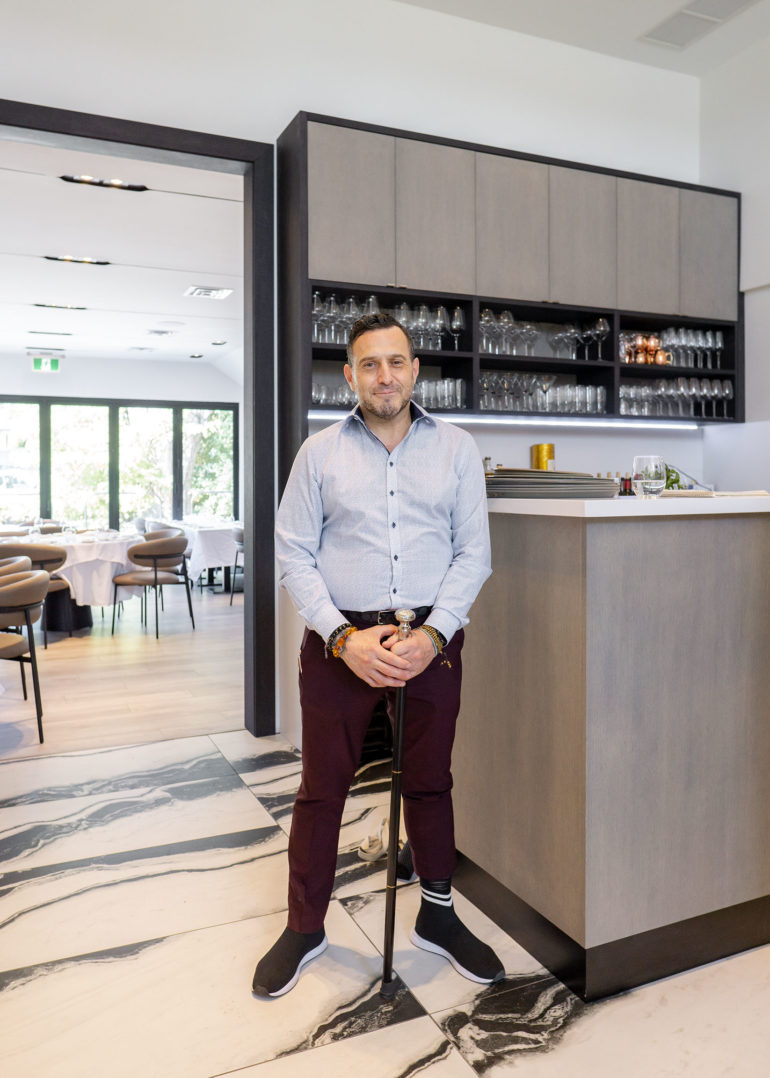