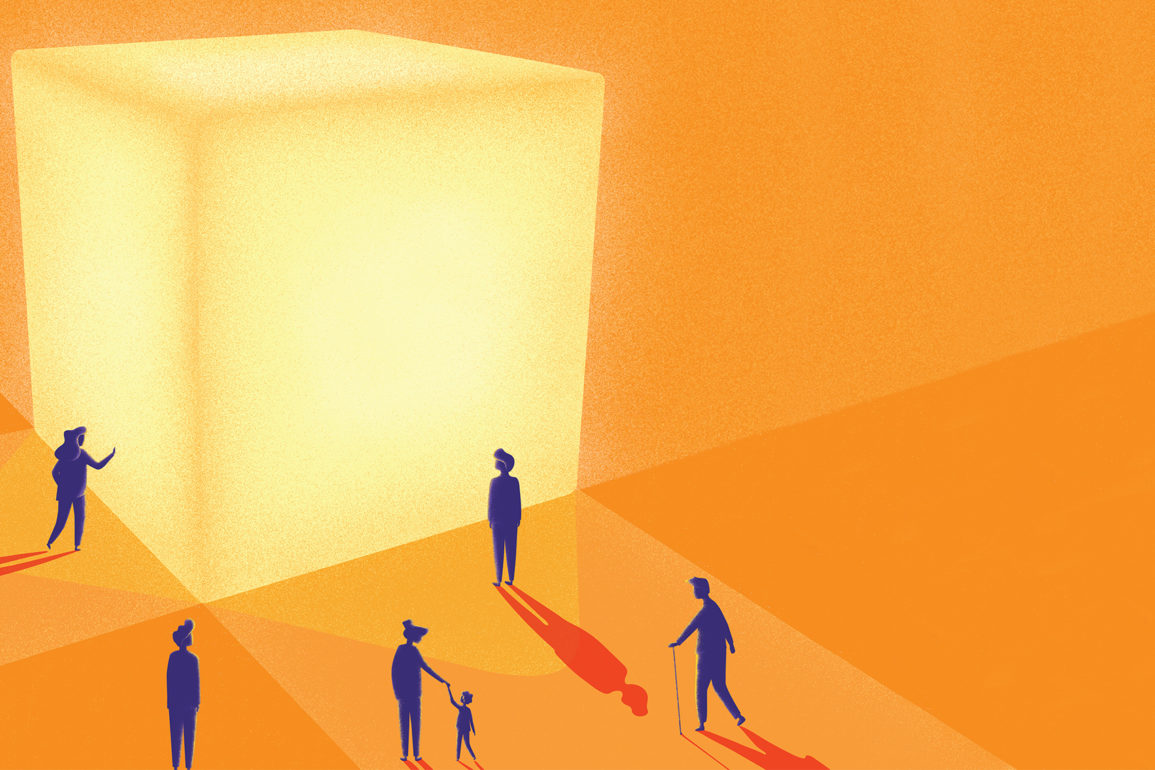 As the 43rd annual Toronto International Film Festival (TIFF) sadly came to a close, so did another year of drama, another year of controversy, and another year of great films. The surprising bit though is that some individuals are just simply unaware of what I have referred to. As someone who has indulged themselves in these festivities for the past three years, it’s hard to believe that many people still don’t know what the festival is or what it even has to offer. So, with that being said, what is it that keeps this 21-year-old aspiring filmmaker going back to the festival year after year? Yeah, sure it’s the movies (getting to see them sometimes a few months in advance is quite the perk) and yeah, the celebrities (seeing Emma Stone last year was a highlight), but it’s the community that Toronto encapsulates year after year, that I think has had the biggest effect on me; this time was no different.

There’s something enticing about the atmosphere of the festival. Seeing a film premiere with a room packed full of strangers may seem like a daunting task, but everyone at the festival is there because they love movies, so chatting to the stranger next to you prior to the start of your screening about the festival, films, and future screenings, is normal, in fact, I encourage it. And all of this is, of course, culminating with the movies themselves; the real stars of the show.

This year I was able to attend the screenings for three films: Vox Lux, The Old Man & The Gun and First Man. I would have liked to have seen more, but I guess I’ve learned my lesson from trying to buy tickets online – if you’re going to do it, buy festival packages! This will give you a bundle of tickets (usually 6, 10, 12, or 20) and guarantee you that amount of tickets. From there you just choose the movies you want based on availability and considering you get to choose a week before members and two weeks before the public, you usually have a good shot to see the movies you want. Oh well, we all have to learn somehow. There’s no need to dwell in the past, so let’s look at my choices and whether they lived up to the hype.

My festival officially kicked off with Vox Lux, a movie that snuck into the scheduling last minute but still had the promise to deliver, thanks to the talent of Academy Award Winner, Natalie Portman (Black Swan 2010). There was no other movie on the festival circuit that stirred up more of a controversy than this. On the surface, Vox Lux is the tragic uprising of a child’s talent that turns her into a glamorous pop star, but what the film’s director, Bradley Corbet, is able to do, is turn it into a social satire on our ‘celebrity’ run lives and shows us just how much power we give to those in the media. Sounds somewhat pretentious, I know, right? And for some, it will definitely come across as such, but with the film surrounded in such a dark and immensely disturbing tone, yet at the same time being glamorous and thought-provoking, you can’t do anything but continue to watch. What Corbet’s work does is something you can’t really say about many films nowadays, it stirs up a conversation. Honestly, I think it’s just what the festival and the industry needed.

In many ways, I like to look at it as this year’s Mother!, which was Darron Aronofsky’s metaphorical telling of the Bible (premiered at last year’s festival). Many reviews criticized the overly preachy themes, yet some (including myself) praised it. There’s no denying that people talked about it though, and even if you didn’t appreciate the direction, you have to congratulate it for that. I think the same will go for Vox Lux.

Whether it be for the strong fascist motifs, the dramatic shift in tone halfway through the movie, or the controversy of the entire film itself, Vox Lux is a definitive must see. It’s a modern-day thinking piece of where the world has gone today, and whether you like to admit it or not, it shows just how far we still have to go.

Next up was The Old Man & The Gun (the sole premiere I was able to attend this year). Although, as stated above, much of this year’s talk leaned towards Vox Lux, this movie had quite the buzz around it as well, albeit for a different reason. This was rumored to be the last work of the famous Robert Redford. So, as you can imagine I took advantage of this opportunity to attend a potentially historic event, and not only did I watch, I experienced everything from the third row – I guess seeing a movie on your own does have some perks.

The film is as charming of a swan song as it’s charming lead. Robert is truly the standout here, he plays the charismatic lead in a heist movie… where he never even fires a gun. That’s no easy task for any actor, yet he does it like it is second nature. When a movie like this (something with very little ‘literal’ action) can keep you interested from start to finish, you have to give it credit. It doesn’t just belong to the incredibly well-rounded cast though, but to the director, David Lowery. What I respect so much about David is that he can bounce back and forth between genres depending on what the film or story desires. His previous work, A Ghost Story (2017), which initially put him on my radar, is a drastically different feel and mood compared to the smooth-talking entertainment of his latest work. David’s range is perhaps his most useful talent, making me look forward to his work for years to come.

The great thing about premieres is that they not only give you just the film, they also give you the red-carpet experience which is packed to the brim with camera crews, interviewers, interviewees, and insightful Q&As with the cast following the movie. Seeing these ‘stars’, as not only the big onscreen presence but as creatives, is incredibly humbling. As an aspiring filmmaker, there’s nothing more satisfying than listening to the words of the industry professionals. To me, the premieres are the definitive way to see a movie at the festival, yeah it helps if the movie itself is great as well, but the premiere is the full package – a must for any film fan. If you’re still trying to justify that extra bit of money for a premiere ticket, I’ll add this, being there for potentially the final standing ovation of the great Robert Redford is something that no one can ever take away from me, so thank you TIFF.

My final movie at this year’s festival was perhaps my most anticipated. With Damien Chazelle at the helm, who is quickly becoming one of my favourite directors (Whiplash and La La Land), and the star power of Golden Globe Winners, Ryan Gosling and Claire Foy, this movie had everything to make it one of the year’s best, and it did not disappoint.

Most people know the story of the first ever moon landing. In fact whenever anyone brings it up all we can think of are the famous words, “That’s one small step for man, and one giant leap for mankind.”, but what First Man does is not only tell the captivating story that we already know, it adds layers of sacrifice and accomplishment to it that makes you look at this historic event in a different light. Both Ryan and Claire demonstrate a subtle level of intensity in every scene, with such ease. The confrontations between the two characters have you siding with both arguments, which is already hard to accomplish, but with the incredible script and superb performances, the movie is captivating from beginning to end.

To me though, the real star is Damien, his directing choice of using close-up shots mixed with a variety of shaky and handheld camera work literally puts you in the pilot’s seat – sorry, the astronaut’s seat. At the mere age of 33 (just 32 when he won the Academy Award for Best Director, making him the youngest ever to do so), Damien knows how to approach each of his works from a different angle, gratefully it’s the angle that helps his audience get the most out of every scene.

First Man has everything, which makes me believe there will be quite a bit of Oscar buzz coming its way, and rightly deserved. Although the movie did not win the Grosh’s People Choice Award (the noblest award at the circuit, the best film of the festival voted by the people), it earned my vote and the votes of countless others around me in the packed auditorium… if that counts for something.

Well, that was my festival, just the three films this year, again, would have liked to see more, but there’s always next year. I will say though, I was thoroughly impressed with all my choices, they all brought something unique to the table and all left me with something to think about – that’s more than I can say about previous years.

I think that’s what makes TIFF as successful as it is, the sum of all its parts. From the creatives that bring their work there each year, to the generosity of the volunteers, and to the setup of each venue, it encapsulates everything the film industry strives to be. And that is why I will continue to go for many years to come.

So, I’ll leave you with this, the promise of celebrities and world-class films may entice you to give the Toronto International Film Festival a try, but trust me, it’ll be the community of film lovers that will keep you going year after year. I think that’s something special. 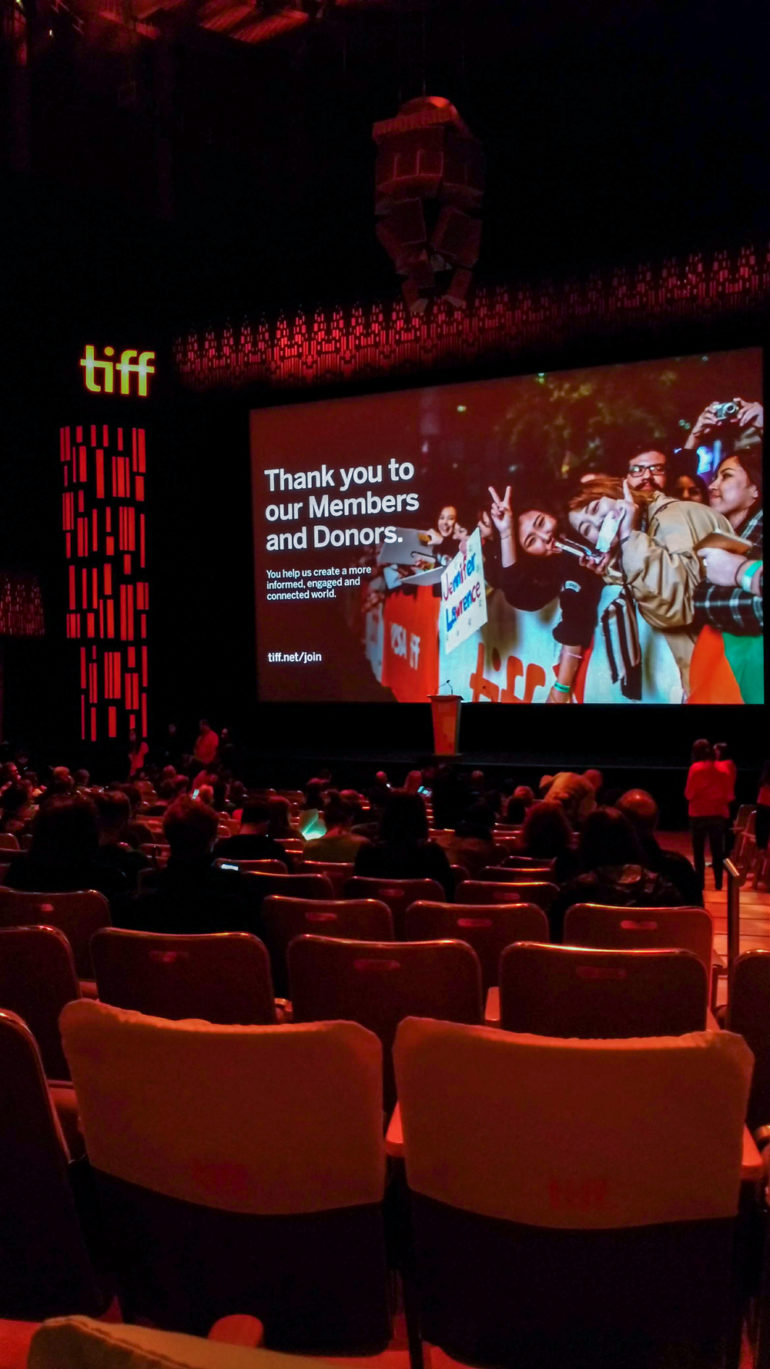